In her award winning book, Fearing the Black Body: The Racial Origins of Fat Phobia (2019), sociologist Sabrina Strings presents a meticulously researched history of the transformation of Euro-American ideologies toward fat from the Renaissance to the present day. A major contribution to scholarship on racial formation, the politics of colonial knowledge production, and the history of medical discourse, Strings takes us from Descartes to CNN, from John Calvin to Cosmopolitan, to tell us the story of how our world has come to be dominated by fatphobia, or a fear of fatness, and the deeply anti-Black roots that this fear entails.

Strings traces the roots of fatphobia in anti-Blackness by weaving together seamless analysis of art, history, literature, philosophy, and science, offering exceptionally wide-ranging evidence of the emergence of our modern hatred of fat in the historical wake of colonization and the transatlantic slave trade. The enslavement and forced removal of Africans to Europe and the Americas necessitated a new form of “racecraft,” to create whiteness as distinct from Blackness. What Strings demonstrates is that the subsequent waves of racial formation in which whiteness emerged and was consolidated, not only involved the demonization of Black skin, but also relied on the identification of fat with Black femininity, seen as simultaneously excessive and inferior. But it wasn’t always this way, as a stroll through the Metropolitan Museum of Art in New York would reveal countless images of voluptuous women idealized by the early moderns as the epitome of beauty. In today’s context, fat is synonymous with everything from disease to laziness. How did we get here?

Beginning with High Renaissance painters like Albrecht Dürer and Peter Paul Rubens, Strings introduces us to the period just before enslavement reshaped the European social imaginary, where shapely white Venuses were prized and plumpness preferred. But aesthetic preferences began to shift alongside the changing landscape of European cities like Antwerp and Venice, which were undergoing dramatic demographic and economic transformations with the rising slave trade. Black women became increasingly present in artist’s renderings, but were represented as thin, sickly servants, seen as lowly and inferior.

By the sixteenth century, with slavery and colonization in full force in the Americas, extracted labor gave way to extracted resources, especially sugar. The reconfiguration of European diets and the mass accessibility of the “white gold” meant changing body shapes and sudden anxieties around fat, particularly among the male population. It is during the early Enlightenment that we first see the thinness admired as a sign of male rationality. Intellectuals from Shakespeare to Descartes dismayed corpulence as indicative of dim-wittedness, with excessive consumption being primarily viewed as an obstacle to higher thought. This was bolstered by the post-Reformation context in which self-regulation became key to cultivating morality, in which gluttony was one sin to be avoided.

But it wasn’t until the late seventeenth century that fat became a resource for racial categorization. The writings of early race scientists like George Cuvier, J.J. Virey, and Georges-Louis Leclerc drew direct ties between gluttony, stupidity, and the characteristics of Africans, whose idleness was attributed to their warm climate (a pervasive trope also found in colonial discourse about India). Enlightenment-era rationalism elevated food to the moral plane of asceticism required for intellectual pursuit. Soon, a thin physique had gone from being a sign of sickliness to evidence of the moral and intellectual superiority of Europeans, supported by the writings of anthropologists and naturalists seeking to codify and biologize a racial hierarchy. These works placed particular emphasis on the bodies of southern African women, who were depicted as grotesquely monstrous and animalistic while also serving as a source of voyeuristic fascination in formats like Cuvier’s traveling ethnographic menagerie, which featured pay-per-view displays of robust enslaved African women like Saartjie Baartman.

By the eighteenth century, the “svelte ideal, this new ascetic aesthetic” (118) that was first articulated by scientific race-makers had fused with the moral imperative of temperance articulated by post-Reformation essayists in England. Travelogues from British women in the Orient like Lady Mary Wortley Montague—who is said to have only consumed milk—decry the “fleshy and ‘sensuous’ figures” (117) and unrestrained culinary habits of Turkish women in order to affirm the superiority of lithe European women. Other scholars have similarly noted the importance of the writings of Euro-American women for the consolidation of racial difference as embodied difference. In the North West and South Asian contexts, I am reminded of Mrinalini Sinha’s analysis of Katherine Mayo’s writings on India’s “oppressed” womanhood in Specters of Mother India or Afsaneh Najmabadi’s history of the erasure of the third gender category of the effeminate young man in the wake of European contact with Iran detailed in Women With Moustaches, Men Without Beards. But it is in Strings’ analysis that we finally learn how the construction of whiteness was also predicated on thinness as directly tied to anti-Blackness.

As the nineteenth century gave rise to American empire, so came the medicalized derision of the figure of the robust Black African woman captured in the “proto-science of health and beauty” (139). The thin ideal of white American femininity emerged after a period of moral panic surrounding American women as too thin, but by the mid-nineteenth century magazines like Harper’s Bazaar and Godey’s Lady’s Book begin to publish articles that directly tie fat to “African savagery,” as well as a form of “crime” and “deformity” (152). But as new immigrants arrived, anxieties grew around maintaining the superiority of northwest Europeans (of whom Celts and Irish were recently assimilated into an Anglo-Saxon whiteness). In an effort to define the ideal of American beauty, and thereby to sustain white supremacy over immigrants and enslaved Africans, thinness grew as an index of both racial and class distinction.

By the early twentieth century, the culturally, scientifically, and religiously embedded derision of fat as a sign of racial Otherness, intellectual inferiority, and moral debasement set the stage for a century that culminated in the newest moral panic around fat. The so-called “obesity epidemic,” which problematizes Black women in particular as “social dead weight” (Strings 2015), relies on deeply political knowledge about bodies cloaked in rhetoric of objective science. Culminating in a Foucaultian critique of various waves of medical discourse around fat in the twentieth century, Strings makes clear how the legacies of African enslavement and genocide that solidified global white supremacy have relied on processes of racialization that inferiorize Black women’s bodies as both overly sensual and excessively shapely.

Without understanding how fatphobia emerged in response to slavery and in order to solidify whiteness as an embodied phenomenon, we cannot grasp how our contemporary obsession with thinness is rooted in anti-Blackness. The most current manifestation of institutionalized fatphobia around “obesity” as a public health crisis is deeply reliant on the same ideologies that European race scientists drew on to construct fat as indicative of the laziness of body, mind, and spirit.

With the rise of the so-called “obesity epidemic,” Black women’s bodies continue to be subject to medicalized disgust despite the significant evidence that weight stigma, not weight itself, constitutes a serious health risk and predictor of negative health outcomes. The stakes of this debate around “obesity” are thus exponentially higher for Black women, but debates around medical racism rarely address fatphobia. As such, this text constitutes a much-heralded contribution to our understanding of the relationship between white supremacy and thin supremacy.

Strings’ research shows that Western medicine has always relied upon the brutalization and dehumanization of Black people, who were often forcefully subjected to medical research and unanesthetized surgeries under the guise of “scientific discovery.” The contemporary aversion toward people in large bodies is inextricable from these historical processes of objectifying fatness as a sign of racial inferiority.

As a scholarly text jam-packed with historical analysis and cultural critique, Fearing the Black Body has found resonance with audiences ranging from Scientific American to the New York Times to Instagram. As quickly as it has spread, it has sparked necessary discussions about the role of anti-Blackness in our obsession with weight. Whereas ample research has shown medical racism to be rampant in everything from clinical studies to the disparate treatments received by Black patients, the field of dietetics and nutrition studies is only now warming up to discussions of racism in the field, but not of the field itself as racist, that is, as arising from the same race-making impetuses of early health scientists and magazine editors who unceremoniously disparaged fatness as a form of racial and moral savagery. 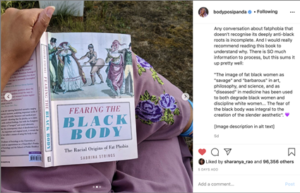 Body positivity Instagram influencer and author Megan Crabbe (@bodyposipanda) is just one of many popular figures in fat activist circles who has reviewed Fearing the Black Body for her audience of 1.3 million.

In an interview for the podcast Food Psych (Episode 196), Strings recalls one of the many questions she is asked by skeptics: what do we make of the fact that white women are also impacted by fatphobia today—doesn’t that mean it’s not actually racist? Strings’ answer is illuminating: “The reason for fatphobia affecting white women is because fatphobia is related to anti-Blackness… If fatness is related to Blackness, and if there was an entire movement in the United States where white people were trying doggedly to prove that they were white and not Black, then it’s very important for white women not to be fat. So there’s a way in which fatphobia, being an index of anti-Blackness, very directly harms white women in contemporary America.”

Strings’ book affirms what many queer, gender-nonconforming, fat Black activists already knew, but has been largely unaddressed in the landscape of contemporary fat activism. While the mainstream strand of “body positivity” has been re-valuing fat as a either a neutral or a positive source of identity (much like being tall), this strand of ‘fativism’ has largely been a space dominated by white women, who have only now started to catch on to the role of racism in fatphobia. Meanwhile, many fat Black activists have long been approaching fatness from an intersectional lens, but until recently have been siloed into the category of racial justice activists. Now, we see important figures like Sonya Renee Taylor, Roxane Gay, and Stephanie Yeboah, among others, gaining wider audiences after years of working on the intersection of anti-Blackness, anti-fatness, and cissexism.

Strings’ research provides a wealth of empirical evidence demonstrating that our contemporary obsession with thinness is inextricable from the historical processes whereby fat was objectified as a sign of racial inferiority. As the calls for dismantling institutionalized white supremacy have gained steam due to the efforts of Black activists, so must we decolonize our body politics by dismantling the diet industrial complex, “obesity” research, and the doctor’s office (not to mention nearly every aspect of our media, from magazines hawking weight loss to reality television shows premised on the humiliation of fat people). Maybe, in a few decades, it won’t be controversial anymore to say what Strings and others have shown: your desire to be thin at all costs? That’s racist.

Hannah Carlan is a PhD candidate in Anthropology. Her work broadly addresses the gendered politics of multilingualism in contemporary India, with particular emphasis on how everyday linguistic practices shape rural development efforts in the Himalayas. She is a recipient of the 2019-2020 Jean Stone Dissertation Research Fellowship.

Taylor, Sonya Renee. The Body Is Not an Apology: The Power of Radical Self-Love. 1 edition. Oakland, CA: Berrett-Koehler Publishers, 2018.