Transport and mobility systems in cities across India have been critiqued for their top-down approach, which overlooks the ways in which transport systems can impact gender relations and social mobility for women.1,2 Bengaluru city, the “Information Technology capital of India” is no exception to these trends. The Bengaluru Metropolitan Transport Corporation (BMTC), a quasi-state “public” transport system, charges high bus fares and allocates routes based on their revenue potential.3 The high fares have practical implications for many of the city’s low-income and working-class people, especially women, who are heavily dependent on the public bus system for their everyday mobility needs. Moreover, the city is characterized by ad hoc, rather than “planned,” growth. Thus, transport needs vary not merely based on social location (such as intersectional class, caste and gender), but also based on particularities of place. In 2016-17, I conducted long-term ethnographic fieldwork in Bengaluru with a focus on women commuters from low-income communities located in the southern periphery of the city. In the ethnographic vignettes that follow, I highlight the insight from women commuters on the impact of limited transport access on their lives as well as on the community as a whole. Their robust knowledge of the BMTC’s socio-spatial logic, the social and geographic rhythms of their neighborhoods, and the unexpected, otherwise invisible social interactions between BMTC employees and commuters that can determine last-mile transport access, make them important voices in reimagining and creating more inclusive public transport in the city. 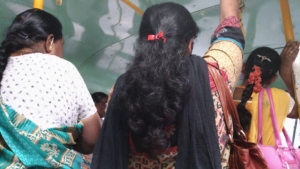 Bhagya lives in a low-income neighborhood in the southern periphery of Bengaluru city. She is 31 and works in a garment manufacturing unit. Like Bhagya, many women who live in the neighborhood work in garment manufacturing factories located en route to the center of the city. On a Sunday afternoon, Bhagya, her friends, and I sat on the terrace of the local government school, sipping on hot tea served from an orange-colored flask. Bhagya and her friends informed me that the neighborhood was very poorly connected to the city’s transport grid, and that the BMTC had allocated only one fare-subsidized bus, and two ordinary buses (which charge standard fares) for their neighborhood. Moreover, they added that these buses were not regular, causing people to spend hours waiting at bus stops, walk long distances to access more well-connected bus stops, and in many cases, forcing them to use more expensive forms of travel like auto rickshaws, just so they could make it to their places of work and schools on time. Failing to reach work and schools on time often resulted in penalties and fines, aggravating their already precarious financial situation. Bhagya and her friends rationalized their limited access to buses:

Buses do not come here because there is no collection [financial gain] on this route. That is because everybody here has passes [monthly bus passes, since many commuters used multiple buses as part of their everyday commute and in the long run, bus passes were more affordable than purchasing multiple tickets everyday]. Haven’t we paid Rupees 1050 for the pass? Adding to that we spend Rupees 1000 (approximately USD 13) every month on auto rickshaws. Out of the Rupees 5000-6000 (approximately USD 66-USD 80) monthly income, if we spend so much on transport, how do we run the household? (B. Kumar, semi-structured interview, September 8, 2019)

While monthly bus passes benefit commuters, the BMTC earns more revenue from daily ticket sales. As a result, as Bhagya and friends pointed out, the BMTC prioritized routes with more ticket sales, subsequently overlooking neighborhoods with a significant number of monthly pass holders, forcing them to pay for auto rickshaws over and above their monthly pass expenditures. The lack of BMTC buses providing last-mile connection increased the monthly transport expenditures of low-income commuters substantially. My interlocutors also observed that the few buses that arrived at their neighborhood were available only during peak hours when people were leaving for work. This led to more important questions for them about the welfare of other community members: “What about those who are not employed? What about elderly people? Just because they are not working, it does not mean that they do not have reason to go out. They also need bus service to go to hospitals for emergencies, etc.” (Ibid).

Bhagya informed me that not only were members of her neighborhood adversely impacted by a lack of access to buses, they also felt alienated from the platforms set up for registering complaints and requesting more buses. “When the buses stop, you stop,” she said to emphasize how the entire neighborhood can lose access to various basic amenities when there is a lack of access to public transport. Although the public bus system set up online platforms for registering requests for increased service, my interlocutors found themselves alienated from online platforms because of a lack of access to smartphones and computers. Bhagya and other community members decided to ask for more buses by approaching the local bus depot. However, rather than document their complaint, the officials at the depot asked them to stage a road block and prevent any of the buses from getting past. Bhagya and her community members disagreed with this suggestion, since they were concerned that they might be penalized if they staged a road block. Bhagya used this example to emphasize the ways in which claims-making was constantly placed out of their reach.

When asked what they thought would resolve their mobility constraints, my interlocutors stated their needs very clearly. In addition to a substantial increase in the number of buses during peak hours, they also expressed a need for hourly buses that would enable the elderly and others to travel for purposes other than work. Well aware of the geography of the place, the schedule followed by buses, and community dynamics, they observed “One or two bus routes end a couple of kilometers away from this neighborhood, we need them to be extended to our locality. Also, some drivers and conductors have a difficult relationship with the locals here, so they refuse to come to our locality and turn the bus around before this stop. There is no need for politics, we just want buses. We need them to be on time!” (Ibid). As this quote illustrates, while the BMTC’s top-down logics of bus allocation standardizes the process on the basis of revenue potential, my interlocutors point out that last-mile access to buses also depends on unexpected factors such as interpersonal relationships between bus drivers and local residents among others.

Many of the women I interviewed informed me that access to buses was determined not only based on where they live, but also on who lives in a particular place, and other less visible processes and relationships of power. As a result, their suggestions for improved access, in attending not only to individual needs but also to the needs of the local community, are founded on experiential knowledge of the geography of the area, the volume of buses that frequent their bus stop as well as neighboring bus stops, the nature of interpersonal dynamics between local residents and bus drivers and conductors, and the operational logic underlying the BMTC’s rationale for allocating buses. Bearing these facts in mind, I assert that to create more inclusive transport systems it is essential to consider the suggestions of its women commuters, not only because of their in-depth knowledge, but also because the solutions they propose go beyond individual needs and attend to the needs of the community as a whole. 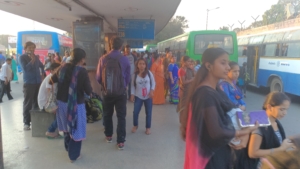 Lakshmi used to live in a slum located in the center of Bengaluru city. She informed me, “The slum had been built with much care by our fathers and grandfathers. Over the years, they had invested a lot of effort into harnessing political support to access basic amenities such as water, electricity and buses” (L. Babu, semi-structured interview, July 2, 2017). In 2014, the slum was demolished and the residents forcibly relocated to a government rehabilitation facility about 14 kilometers (8.69 miles) away.

The government slum rehabilitation facility is located on an eight kilometer (4.9 mile) stretch of road with scarce access to public buses. Lakshmi and her friends told me that after their forced eviction and relocation, their husbands had been unable to find employment in the new neighborhood, and that children had to travel 14 kilometers each way, every day, to get to their schools. The women therefore had to shoulder the responsibility of being the sole breadwinners as well as domestic caregivers of their families.

The reduced access to transport after relocation had a huge impact on the everyday rhythms of Lakshmi and her friends, not to mention their physical well-being. They were forced to organize their lives around public transport. They informed me that they woke up at “3:00 am, to finish all the housework by 4:00-4:30 am and get ready and leave at 5:00 am, only to reach work by 6:00-6:30 am.” The reduced access to buses, compounded by the increase in distance traveled to work made the journey physically strenuous for them. The women were well aware of the schedule of buses coming to their neighborhood. “There is no direct bus during peak hours [as a result of which many women had to switch multiple buses each way to get to their places of work]. The BMTC complains that there are not enough passengers, which is why they do not want to allocate more buses here. They have to come all the way inside this road for just four or five passengers. If they can’t come when we need buses then obviously there will not be enough passengers!” Lakshmi’s friends conclude indignantly in response to the BMTC’s preoccupation with revenue generation (Ibid).

When asked what they needed in terms of public transport access, they replied—rather than having one or two very infrequent buses that connect to central transport hubs, introducing one mini-feeder bus that travels back and forth, linking the entire eight kilometer stretch of road to the transit hubs at either end would ensure reliable access to all the local residents. This would resolve the conundrum of last-mile transport access that many local, low-income residents had to deal with on a daily basis. These women commuters showed keen insight into the ways in which geography impacts the commuters as well as the BMTC. As they suggest, if it is not profitable for the BMTC to run buses of regular capacity on the eight kilometer stretch throughout the day, they might consider smaller (mini-feeder) buses that only travel back and forth, connecting the transit hubs at the two ends of the road. They not only consider the impact that transport access can have on individual mobility, but they also consider the collective benefit that improved transport access can have for the community.

As these ethnographic vignettes illustrate, public-transport needs in Bengaluru often vary based on particularities of place, livelihood trends, and the relationship between BMTC drivers and locals, among other socio-spatial factors. Transport solutions therefore need to take these complexities into account. Moreover, much like research on women and transport in cities such as New Delhi has argued, limited mobility and access to transportation adversely impacts women’s ability for social mobility.4 Bearing these trends in mind, I assert that there is a need for public transport that takes into account the socio-spatial diversity of cities by including women commuters’ critical commentaries as potential solutions.

Jananie Kalyanaraman is a PhD candidate in Anthropology at UCLA. She is the 2018-2019 recipient of the Jean Stone Dissertation Research Fellowship for her project “Window Seats: Studying transport and inequality in Bengaluru, India.”