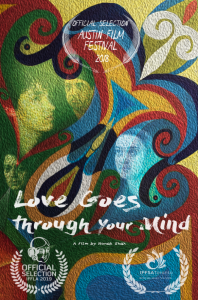 In September of 2012, I moved from New Jersey to the West Coast to begin the Master of Fine Arts program at UCLA. I came to study film directing, but also with the intention to direct a feature film as my thesis because I knew what the subject matter was going to be – an Indian American family and how they deal by not dealing with the mental illness of one of their own.

The product, Love Goes Through Your Mind, is a labor of love that was completed over a span of five years. Having personally come from an immigrant background, I wanted to depict the psychological struggles that come hand in hand with trying to survive in a land far away from home – a poignant story that challenged perceptions because in the Asian American community, there is a crippling stigma toward mental illnesses. The shame that is behind it leads to a lot of denial along with an intense refusal to seek help and sadly, sometimes it is too late. Not only is it incredibly detrimental to the person diagnosed, but also their family and friends.

In order to depict this in its rightful light, I grew, overcame, and went through an extraordinary journey over the course of its making. I definitely had some doubt at the beginning as I wondered how it would all get done, what the final film would be like (I had done shorts, but I knew this was a different kind of beast). When I decided to raise funds for the film through Kickstarter, it was actually a way to gauge if there could be interest in this project. If people would support the film even before it was made, then I knew I had an audience that would want to watch it. I felt encouraged and blessed when IndieWire decided to write about our Kickstarter campaign and even more when we met our goal.

The next step was getting a team together. During my time at UCLA, I assisted on many of my classmates’ projects in various different roles. We have a great community, you develop a network and people support each other – I like to think of it kind of like a barter system. So when it came time to shoot Love Goes Through Your Mind, I reached out to my friends and they came through!

What also helped was that a lot of them enjoyed the script/story. It always starts from there as I would request them, “Hey, I don’t have much money, but please consider reading the script before making a decision”. I think it spoke to people at a deeper level and that’s what got us through the rough filming days – that everyone was on board with the story. We made a point to try and not go past 12-hour days. There were times when it got really hot (as we shot during summertime in LA) or were in cramped spaces in the house. Yet, they stayed for the entire 21 days of shoot. 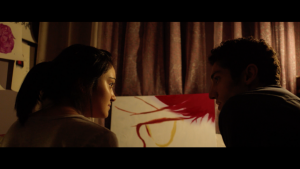 Through the entirety of pre-production, production and post-production, I knew I needed patience. Especially when one doesn’t have a lot of money and is juggling many different roles. It’s easy to simply write something off during the process, convince yourself by saying, “it’ll just work.” Even when that little voice called your gut/intuition is saying (sometimes screaming) – something’s off. During those moments, I took a breath, paid attention and listened to it. If I couldn’t while at my desk, I would step outside, go for a walk and maybe smell a flower. Somehow, I had to say hello to it. Not surprisingly, it ended up saving me multiple times during the writing, casting and editing process. With the writing and editing part, it mostly had to do with a scene that wasn’t working and with casting, it was about choosing the right actor for the role.

To nurture this intuitive voice, I tended my meditation, hiking and painting. I did this because it’s so instrumental to have that pause – a moment when needed, through the confusing times. This is because there is so much going on during all the different stages while making a movie that it can easily clutter the mind and create a lot of mind noise, which can make it harder to see what it is that you had wanted to convey in the first place – as in, what is the core of your story?

Ironically, it felt like the hardest thing to do in the moment because all I wanted to do was to figure out the answer. But the self-care routines helped it come naturally, organically and also, supported getting in touch with what is going on underneath – what is the subtext? After all, what I was doing through storytelling is conveying emotions and it’s harder to effectively do so if I don’t allow my own to breathe. I had to make space and hold all of them, the positive and the more difficult ones because one cannot exist without the other.

One thing I have always advised undergraduate students who ask me about filmmaking and if that is the route to pursue, is that if they can picture themselves doing anything else besides making movies for a living, to please do that. If not, then go ahead and make movies. I can positively say after having gone through this journey that what I also gained was confidence as I made a film to see if I could picture myself doing anything else and I couldn’t.

As a minority, female storyteller, I will continue making films that touch, challenge and  inspire audiences to reflect on their unyielding beliefs and am proud to contribute to the pool of character-driven, poignant stories.

Ronak Shah is an MFA student in UCLA’s School of Theater, Film, and Television. In 2018, she received CSW’s Elizabeth Blackwell, M.D. Award.