Join CSW on May 10, 2018 for a research talk by Kristine Ashton Gunnell!  Details and RSVP: Grantmaking for Systemic Change: Daughters of Charity, Seton Institute, and Alleviating Poverty in the Global South, 1985-2010

Combatting poverty is a complex, multi-disciplinary endeavor, and studying the history of Catholic sisters engaged in this work pushes scholars to incorporate different disciplinary perspectives, methodologies, and tools into their research. When studying the nineteenth-century history of the Daughters of Charity, I found scraps of evidence in newspapers, city council minutes, scrapbooks, and other sources. From my perspective, some of the most valuable of these were the sisters’ letters. They offered a more personal—although not completely unfiltered—perspective on the events of day. As I’ve shifted my focus to the more recent history of the Daughters of Charity Foundation (1984-the present), I’m finding that while correspondence remains important, it is often not as meaty. Cultural shifts which have increased our reliance on telephones, email, and other forms of electronic communication can obscure the richness of the personal relationships between sisters, board members, and other supporters which sustained the Daughters’ ministries in the late twentieth century. 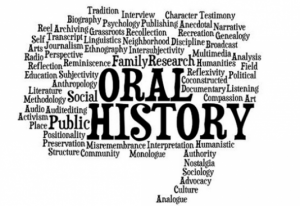 Oral history offers tools that help to bridge this gap. Sister Teresa Piro, D.C., established the Daughters of Charity Foundation in 1984, with the intent of bringing a more “business-like” structure to the sisters’ fundraising activities. She gathered a group of prominent Catholic women who were also committed to the Daughters’ mission to serve those struggling in poverty, including Verle Casey Pozzo, Ann Russell Miller, Loretta Young, and Marie Gallo, among others. Of the original group, only Miller (who is now Sister Mary Joseph of the Trinity, O.C.D.) and Gallo are still living. However, many of the board members have been involved in the organization for over a decade, with its most senior members serving for twenty-seven years. Studying meeting minutes provides the nuts and bolts of the foundation’s history, but the motivation and meaning behind its actions resides in the memories of these women. Memories are complicated sources. They can be affected by time, the line of questioning, positioning of narrator, and her relationship with the interviewer. Nevertheless, oral history can be a powerful tool when used in concert with archival sources.

As a field, oral history is technologically driven. With the support of the Tillie Olson Grant, I attended the Oral History Association Conference in October 2016. The conference offered a workshop tract that was extraordinarily helpful. In addition to presenting a paper, I learned about tools to create digital history exhibits, video interviews, strategies for group interviews, and open source software for managing audio files and transcribing interviews. As a result of the conference, I bought new recording equipment that improves the quality of the interviews and expands their flexibility for future use. I also gained further insight into some of legal issues surrounding use of audio files and transcripts, key bits of information that need to be considered as I continue to search for other ways to share my research.

To date, I have recorded and transcribed twenty-seven interviews with lay board members, long-time staff members, select alumni from the sisters’ schools, and Daughters of Charity who have had various connections with the foundation. The foundation has chosen to maintain an all-woman board, comprised of sisters and laywomen. While the original board was entirely Catholic, foundation leaders have encouraged the development of more diverse perspectives in recent years, recruiting board members with differing professional experiences and religious backgrounds, as well as women of color. Yet, family legacy also remains important. Two of Ann Russell Miller’s daughters serve on the board, as have three generations of Gallos. Mary Elizabeth Gallo felt that an all-woman board allowed members to speak out more, share heartfelt stories, and not have to worry about bringing up something that a man might think was “too emotional.” In short, she said that “It’s the best thing we have going.” Each board member has her own story, but all brought out the sense of community that has developed among the group. Storytelling—at board meetings, social gatherings, and annual retreats—binds them together, helping to focus these women on the foundation’s mission. Capturing the oral history, transcribing and archiving these stories, not only offers scholars a unique perspective on women’s leadership in faith-based non-profits, but also offers the Daughters of Charity a way to keep these stories alive for future generations of sisters and other faithful supporters.

For more information and tips on oral history methodology and equipment, see “Oral History in the Digital Age”

Kristine Ashton Gunnell completed her Ph.D. at Claremont Graduate University and specializes in Women and Gender in the American West. She studies the history of the United States, in particular, the role of religious women in public and private life. She is writing a history of the Daughters of Charity Foundation and Systemic Change, the sisters’ holistic approach to addressing interrelated dimensions of poverty, promoting human development, and advancing economic opportunity. She is a CSW Research Affiliate and received a Tillie Olsen Research Grant from CSW in 2017.