Currently, the UCLA Center for the Study of Women (CSW)  is working to create a UCLA-specific pitch in order to establish fragrance-free spaces and policies throughout campus. One of the hurdles CSW will face—and which many other universities and institutions have faced when trying to become fragrance-free—is push-back from those who believe such a policy will “police their choices” and force them to give up their favorite scented products. In order to overcome this hurdle, we have to ask: why are scented products so difficult to give up? Why do individuals feel the need to use fragranced products in a way that is noticeable to others within a public space? Why do individuals stay attached to fragrances, even though they contain harmful chemicals such as phthalates and other endocrine disruptors and serve no actual hygienic purpose? In an attempt to answer the questions above, I spent 10 weeks conducting archival research in order to analyze both the historical significance of soap and how this history influences modern-day grooming habits. From this unorthodox approach, I found a link between the habitual use of fragrant personal care products and our deep-rooted desire to seem “clean” amongst our peers.

Soap. It’s an everyday, essential item that makes us feel “clean” each after each use. Today, soap comes in a variety of different forms, colors, scents, and is sold by a multitude of brands—Dove, Axe, Olay, Suave, Dial, being just a few common ones in the U.S. However, the gentle, soft formulation of soap that we use today has not always been commercially available to everyone. Pears’ Soap, a company known for using appeals to European imperialist values in advertisements meant to sell their soap, is credited with creating the first mass-marketed soap. In 1885, Chemist William Watson created glycerin-based soap while working under Pears’ Soap company in London, England. This gentle formulation worked in combination with the brand’s distinct herbal fragrance—created using herbal extracts and synthetic fragrance—in order to make Pears’ Soap a popular product.1

Initially, this soap was meant for those of high status who could afford to use such products: “previously available only to the upper class….soap enabled members of the middle class to remove ‘dirt,’ the ‘visible evidence of manual labor,’ and appear clean and pure, thereby differentiating themselves from the dirty lower class as well as the corrupt aristocracy.”2 However, as soap manufacturers got better at mass producing glycerin soap, members of the middle-class who also wished to distinguish themselves were able to buy Pears’ Soap. Pears’ Soap continued to gain popularity both in europe and abroad, and eventually, the brand was purchased by the Lever Brothers, who would go on to form the Unilever corporation, in 1929.3 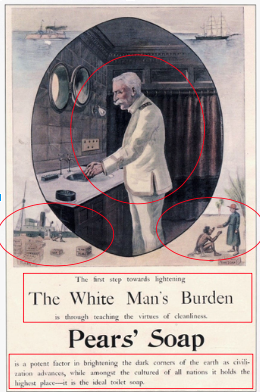 An early Pears advertisement that reveals how the company drew on racist ideals. Relevent sections are circled in red. Source: Wikimedia Commons

While the soap was known for effectively cleaning the skin without being to harsh (unlike lye based soaps), it was also known for its powerful advertising campaigns which state the soap could have other political and social effects. Many victorian-age advertisements for Pears’ Soap contained visuals which associate being unclean with being poor, uncivilized, and ignorant. Even worse, many of these advertisements promoted the idea that those who naturally have a darker complexion are inherently unclean and inferior to those with a naturally fair complexion—some go even as far as to show soap being used to change a black individual to appear white.4 Such ads emphasize the notion that all individuals should strive to maintain a beautiful, clean, fair complexion—a state that requires one to consume soap as he or she could afford. These discriminatory, fear-instilling advertising tactics were utilized later by other soap brands, and also helped them achieve commercial success.

A few decades later, these ideas arrived in the U.S. during the hygiene movement of the 1920s and 1930s. Soap was now seen as an everyday necessity “ranked second only to bread-and-butter in the essentials of life.”5 Soap advertisements continued to stress the importance of achieving a good complexion, maintaining a clean appearance, and smelling a certain way in order to deemed socially acceptable. By doing this, soap companies were able to capitalize on the fear and anxiety of the general public and expand their market. In 1957, Unilever launched the “Dove Beauty Bar,” a soap that became a commercial success for households in the U.S., UK, and Canada.6 Today, Pears’ Soap and Dove Soap are remain two of Unilever’s popular soap brands.

Over the last two centuries, individuals around the world have been trained to use soap and other grooming products in order to show that they are clean, pure, and worthy of acceptance. Thus, many people feel compelled to use scented hygiene products in public spaces in order to show that they are hygienic and that they are able to exhibit hygiene practices that are up-to-par with society’s standards. However, we forget the fact that an individual can practice proper hygiene using completely unscented products—thus, a person can be completely clean and not have a particularly noticeable scent. Ultimately, CSW will have to break down this mindset, which ties scent, to hygiene, to social acceptance, in order successfully establish a fragrance-free policy at UCLA.

Vivian Anigbogu is an undergraduate student studying Human Biology and Society and Public Health. She was part of the Chemical Entanglements Undergraduate Group in 2016 and 2017.