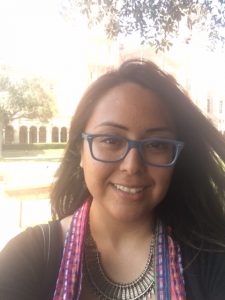 Leadership is a quality that we all have, yet many women have been conditioned to believe that they are not capable of leading and of having a voice. Many women are taught to be demure, to be quiet, and to be simple observers who do not cause trouble or conflict. Growing up, when I would voice my opinion my mother would tell me, “no seas pelionera y toma todo por el lado hamable,” which roughly translates to, “don’t be problematic and take things the friendly way.” My mother still tells me this today. As an adult, I now understand my mother’s frame of reference—she grew up in an environment where women were subordinate to men and thus felt powerless in defending themselves despite the many injustices faced.

As an undocumented child, silence was imposed on me as a form of protection, especially after Proposition 187 passed in California. It was not until I was invited to attend Bell Gardens Intermediate Leadership Camp in middle school that I realized that, despite my undocumented status, my voice and my perspectives were important. Too often young women’s and children’s voices get silenced or dismissed, but this camp focused on developing students’ inherit leadership and improving communication and problem-solving skills for students who would rarely get such an opportunity. This camp planted the seed of resistance in me, and it gave me the courage to speak up and report the injustices that were done to my family. These acts of resistance are what led to our path towards legalization.

A few years ago I got a call from Mr. Miller, my middle school counselor, letting me know that Leadership Camp might have to close due to budget issues and that there was a committee forming to try and save the camp. I joined the committee. It comprised former campers, teachers, and community members. With hard work and time, we raised enough money to reinstate the camp. I attended Leadership Camp this past April for its 38th annual camp as the chaperone of four beautiful girls. I realized that silence and pain are still very present in the lives of the young women in my community.

When I first met the girls they were very quiet; three of the four that I mentored were especially terrified of speaking up. When I asked for their names two of them spoke so low that I could not make out their responses. The girls did not feel like they were leaders. Some of the workshops were very emotional for them and three of the girls had such anxiety about speaking in public that they would tremble. It was so beautiful to see the transformation of these girls. By the end of the camp and with love and encouragement they all used their voices and spoke out in front of the whole camp. For the talent show, they used their voices and lived experiences to write and recite a poem we titled “Jaguar Flower: Strength in Femininity.” One of the most powerful lines in the poem reads, “Just because we are quiet does not mean that what we have to say is not important.” Paying homage to themselves, their mothers and, their ancestors, these girls recited with pride that they were women in five languages at the end of the poem. I feel that it is very important to foster the voices of young women in my community; their voices need to be strengthened in order to stand up to injustice. We need more programs like this one, because there is lots of work that still needs to be done to ensure that young women know that their voices matter and should be heard.

Paula Rodriguez-Diaz is a transfer student majoring in Sociology with a concentration in international migration studies. She is a UC Regents scholar, UCLA Law Fellow and honors student. As a member of the internal collective of MECHA, she coordinated a speaker series titled “State Sanctioned Violence and Indigenous Resistance,” where parents of the 43 missing students of the Ayotzinapa Rural teachers college were able to advocate for their missing sons.   In 2016, she was selected to present her ethnography “Life by the Freeways” at the Tedex GIS day student symposium. The ethnography focused on how the freeway impacts the daily lives and use of space of surrounding neighborhoods of color in East Los Angeles, California. She believes that the narratives of her community in South East Los Angeles are important and should be shared with the world. Ms. Rodriguez-Diaz aims to pursue a master degree in Latin American studies consecutively with her bachelor degree. Her ultimate scholastic goal is to attend UCLA Law School. She hopes to one day provide adequate legal representation to her community in East Los Angeles. She received CSW’s Renaissance Award in 2017.