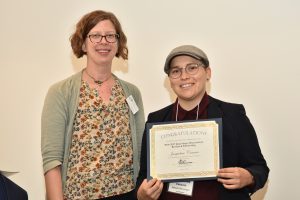 Jacqueline Caraves with CSW Associate Director Jessica Cattelino at the CSW Awards Luncheon on May 31, 2017.

Trans people experience injustice and discrimination in every realm of their lives, and violence against the Trans community is at an all time high. 2016 was the deadliest year on record for the trans community, with a total of 27 killings in the United States. This year alone, there have been 8 recorded killings of Trans women of color. According to the authors of Injustice at Every Turn, the largest study to date on Trans discrimination in the U.S., Trans people of color face higher rates of poverty, homelessness, HIV, and attempted suicide.[1] For undocumented Trans Latinxs discrimination is exacerbated. My work centers the Trans Latinx community and aims to honor the lives that have courageously passed in the face of violence, while looking to honor and ensure the dignity of Trans individuals who are still here.

In an effort to do just that, I have closely collaborated with the TransLatin@ Coalition (TLC), which is a Trans-led and Trans-run national non-profit organization, that advocates for the dignity and respect of Trans Latin@s in United States.[2] Since 2015, I began working with President and CEO of TLC, Bamby Salcedo. Using Community Based Participatory Research (CBPR), a research approach that involves community members and organization representatives in all aspects in the research process, we put together a timely and necessary report to gauge the needs of Trans Latinxs in Southern California. Bamby and I served as Co-Principal Investigators in the project and the members of the TransLatin@ Coalition contributed their knowledge and expertise in the decision making process of the research design, from collaborative development of the survey, to the collection of surveys, analysis of the data and writing of the report. In this way CBPR builds a bridge between academia and community, in order to ensure that the results of the research project come from and go back to the people who need them most. Most importantly, in CBPR, all partners contribute their knowledge and expertise in the decision making process

Because Bamby and TransLatin@ Coalition have been on the ground working in and with the Trans Latinx community, they knew best which topics were important to focus on in putting together the survey. In particular, they were interested in trying to gain a holistic sense of how Trans Latinxs become healthy individuals. We narrowed in on questions pertaining to access to medical services, mental health services, social supportive services, and spiritual services. Ultimately, this resulted in a 70 question survey that we test piloted with core members of the TransLatin@ Coalition. Their feedback was crucial to the final version of the survey which was approved by IRB in January of 2016.

From January to August of 2016, Bamby and I conducted surveys with Trans Latinxs throughout Southern California, including Los Angeles, Long Beach, San Diego, San Gabriel Valley, San Fernando Valley, and Santa Ana. While these communities have a large Latinx population, like much of California, they also have established communities of transgender Latinxs that gather together on a consistent basis. Bamby and TransLatin@ Coalition have an existing relationship with these local groups, which made locating participants for the study straightforward.

After 8 months of collecting data, we turned part of the data into a report for TLC, titled “The State of Trans Health: Trans Latin@s and their Healthcare Needs.”[3] We presented our report to service providers, policy makers, and the Trans community in November 2016 at the National Association of Chicana and Chicano Studies Conference in March of 2017.

A video about “The State of Trans Health,” a research report by Jacqueline Caraves and the Trans Latin@ Coalition

Key findings in the report center on access to six categories for Trans Latin@s: housing, employment, medical healthcare, sexual healthcare, mental healthcare, and spiritual health. Of the 129 participants, only 26% were undocumented immigrants, but 57% made less than $10,000 a year. When it comes to housing, close to 33% of participants were homeless, lived in temporary housing, or relied on someone else to pay for housing, whether a relative, parent or friend. Only 20% of all participants had full-time employment and 26% were unemployed.

One surprising finding was the affinity for spiritually services. An overwhelming majority (76%) indicated that they believe that their spirituality is important to their overall health and well-being. In addition to peer support groups, and support of Trans friends and accepting family members, spirituality is a major source of resilience and empowerment in community.

In continuing this timely work, my dissertation builds on the findings of the “State of Trans Health” report with in-depth interviews with survey participants. Since February 2017, I have collected a total of 14 interviews and plan on conducting interviews with a total of 40 survey participants to discuss how they navigate their intersectional identities as Trans Latinxs and make meaning of their lives. I believe centering the voices of Trans individuals is especially crucial, given that so many of our Trans family are being persecuted everyday. My work, like the work of TransLatin@ Coalition, aims to dignify the lives of Trans people. In particular, my dissertation looks at the way in which Trans Latinxs embody resilience and become empowered to move forward through their relationships with family and chosen family as well through their own relationships with spirituality.

While Trans Latinxs experience many barriers, they continue to survive and thrive. This is what my work with Bamby and TransLatin@ Coalition proves. In humanizing the experiences of Trans Latinxs, we show that Trans violence and discrimination are not Trans issues, they are human issues.

I am grateful to the Jean Stone Research Dissertation Fellowship and the Center for the Study of Women for funding my dissertation project. With their support I am able to continue to humanize the experiences of Trans Latinxs and shed light on their resilience.

Jacqueline Caraves is a gender non-conforming queer Latinx activist scholar who was born and raised in East Hollywood in Los Angeles. Jackie received her B.A. in Latin American & Latino Studies and Politics from the UCSC in 2010 and her M.A. Chicana/o Studies from UCLA in 2014. Currently, Jackie is a PhD Candidate in Chicana/o Studies. Since 2015, she has been working closely with the TransLatin@ Coalition. In 2016, together with the president of TransLatin@ Coalition, Bamby Salcedo, Jackie released the report “The State of Trans Health: Trans Latin@s and their Healthcare Needs.” Jackie’s dissertation work centers the experiences of Trans and gender non-conforming Latinxs and the role of family and spirituality in serving as spaces of empowerment and resistance. Jacqueline was the recipient of the 2017 Jean Stone Dissertation Research Fellowship.