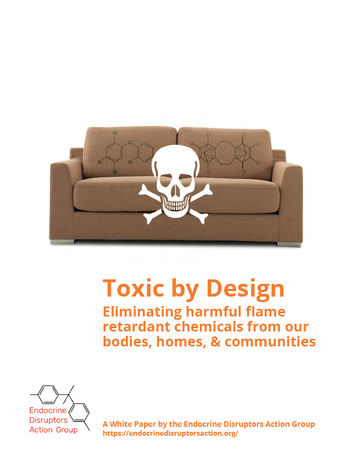 by Rachel Connolly, Graduate Student Researcher, UCLA Center for the Study of Women

This blog post synthesizes information from “Toxic by Design: Eliminating harmful flame retardant chemicals from our bodies, homes, and communities”, a white paper released by the Endocrine Disruptors Action Group (EDAction) in October 2016. EDAction is a group of academic researchers based in Canada who aim to reduce the impacts of endocrine disrupting chemicals (EDCs) and use research to facilitate progressive conversations regarding the management of these chemicals. EDAction focuses on these issues through the lenses of reproductive and environmental justice.

1.     Chemicals used as flame retardants are found in most everyday objects – and in your own body!

Flame retardants are used in furniture, electronics, appliances and other items as a means to reduce the risk of fire. The synthetic chemicals in flame retardants are Built-In Exposures, meaning that they have been purposefully included in objects that we use daily. Monitoring studies have shown that detectable levels of these chemicals are found in human bodies. For example, the manufacture of polychlorinated biphenyls (PCBs) was banned in Canada in 1977, and in the United States in 1979, but a 2009 global study released by the United Nations Environment Programme was unable to identify a single person who didn’t have PCBs in their blood.1

These chemicals are not confined to a specific area; they exist in the foam in our furniture, in household dust, in food that we eat, in our offices, and in public spaces.

3.     So your exposure level is not solely based on your individual choices!

That’s right – even if you make educated decisions about the products you purchase, it doesn’t mean that you won’t be exposed through other avenues. This is why it’s so important to raise awareness and improve regulations.

The EDAction group focuses on endocrine disrupting chemicals, which are dangerous because they alter the human hormonal system and can severely impact reproductive health. Impacts of EDCs are not always immediately noticeable, but can develop later in life. Many studies have linked flame retardants to other health effects as well. 2

If a mother is exposed while pregnant, her child’s reproductive system can exhibit negative impacts later in life. Additionally, exposure to these chemicals can even affect the third generation – i.e., the grandchildren of the initial individual who was exposed!

6.     Exposure to flame retardants is an environmental justice and reproductive justice issue.

In both the United States and Canada, studies have shown that education level, socioeconomic class, race, and age can influence levels of exposure and body burden. Additionally, children are at a higher risk for total body burden. For example, individuals with higher incomes can afford to replace old furniture with a cleaner option, but low-income populations and children (and infants), are unable to do so. This is an environmental justice concern.

Any exposure to endocrine disrupting chemicals is a reproductive justice concern; flame retardants are no exception. These chemicals affect hormones and reproduction and can impact the health of children at birth and through development. They can also alter the “ability of a community to sustain itself over generations.”3

7.     Flame retardants might not even make your home safer!

In fact, multiple studies have found that flame retardants do not have a substantial fire-preventing effect. This could be due to shortcomings in flammability standards testing, and the inability of flame retardants to function properly in real-world situations.

8.     Historically, the chemical industry (in both the United States and Canada) has played a substantial role in the development of flammability standards.

While the United States does not have a national flammability standard, California implemented one in 1975 (TB 177). After the toxicity of flame retardants became more apparent, organizations began to advocate for changes in this legislation. Investigative journalists found that the chemical industry spent 23 million dollars lobbying in opposition of a new standard. In Canada, industry representation also plays a considerable role in standards development, and other relevant stakeholders are often not included in the decision making process.

9.     Regulation of flame retardants is an ongoing and challenging process.

When a particular chemical is banned, alternative chemicals are proposed by the chemical industry. These are often very comparable to the original chemical and pose similar risks. This cycle empowers the chemical industry and delays the removal of flame retardants from consumer goods. This problem could potentially be lessened by the use of the precautionary principle during the chemical approval process.

10.     Products that include toxic flame retardants are still on the shelves.

Due to these complicated regulatory processes, and a lack of implementation of the precautionary principle, many of these products are still available for consumers to purchase.

Recommendations from Toxic by Design: EDAction recommends that the Canadian government prohibit the sale of products that contain a flame retardant chemical that has been proven to be harmful, or has no safety assessment. They also recommend that the government implement the precautionary principle when considering alternative chemicals, and update their current decision-making processes to reflect the necessary changes.

1.     Flame Retardants: “Industrially produced chemicals that are infused in a variety of consumer products — from furniture and electronics, to camping gear, and construction materials — for the purposes of reducing flammability.”4

2.     Endocrine Disrupting Chemicals: “Synthetic compounds that alter the hormone system and can cause adverse health effects.” 5

3.     Environmental Justice: “The recognition that disproportionate burdens of environmental hazards are borne by Indigenous communities, communities of color, and low-income communities, as well as by women and children.”6

4.     Reproductive Justice: “Reproductive justice is concerned with the right to have children or not, to make decisions about one’s life and body, to parent children in safe and healthy environments, and to thrive as a community.”7

The UCLA Center for the Study of Women’s Chemical Entanglements initiative is founded upon a vision to bring together people who are working to expose and reduce the negative effects of toxicants on human health and the environment.

2. Gross, “Flame Retardants in Consumer Products Are Linked to Health and Cognitive Problems.”