Environmental justice and health movements raise awareness of the insidious nature of everyday chemical exposures and the alarming consequences for the health of our bodies and natural environments. These daily exposures are entangled with the history of militarization and war, from the invention and preliminary use of mustard gas in World War I through Gulf War Syndrome at the end of the 20th century. This is the first in a series posts that examine the origin story of chemical warfare, veterans’ experiences of chemical exposure, and the gendered dynamics of the increased presence of chemicals in the civilian world.

In 1915, the work of German chemists and future Nobel laureates Walther Nernst and Fritz Haber was deployed on the battlefield when German forces began launching large scale gas attacks, using chlorine, methylbenzyl bromide and mustard gas. The American military and Allied forces  worked to develop their own gas weapons and effective masks. For the men in the trenches, preparing for chemical warfare meant adjusting to the extreme discomfort of wearing gas masks through constant drills–and some even played sports while wearing masks to get used to the physical sensation. 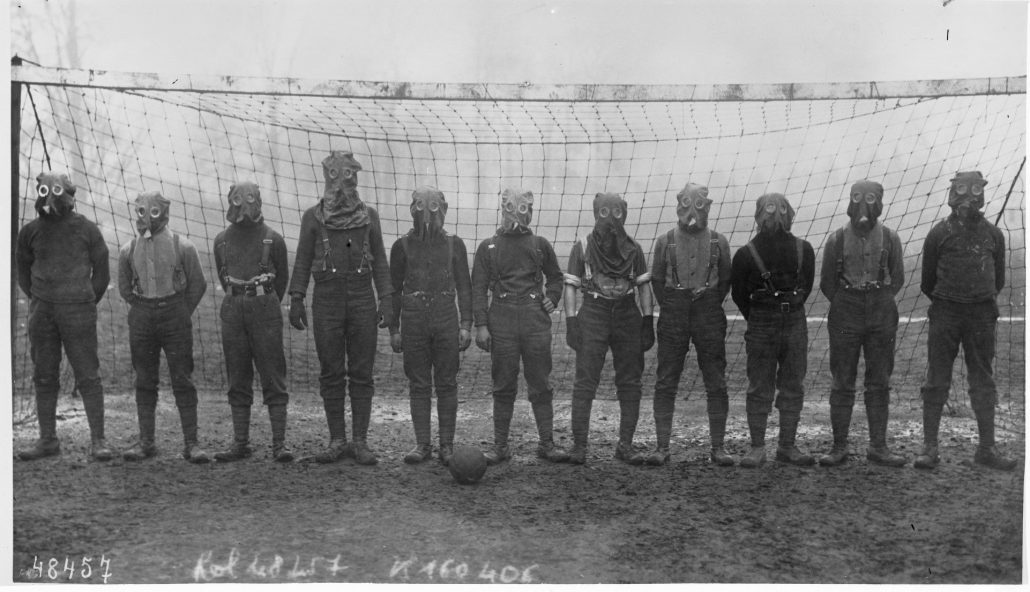 The intimate connections between chemical warfare, anxiety and trauma were instantaneous.  Historian Thomas I.Faith writes of W.E. Vawter, a  gas officer for the 33rd Division of the American Expeditionary Forces (AEF), who stated that  “the most serious” obstacle encountered while training servicemen “was the imagination of the individual man.” Faith elaborates: “Gas clouds were terror weapons, capable of sowing confusion and damaging morale in excess of their ability to cause casualties. In a battlefield environment where small mistakes could get a person injured or killed, uncertainty about gas could cause casualties in and of itself.”[1]

After the end of WWI,  U.S. citizens, including women’s activist groups, denounced chemical warfare as “cowardly” and an “evil of war.”[3] Despite strong opposition, Chemical Warfare Service or CWS–the branch of the U.S. Army tasked with developing and defending against chemical weapons– was never shut down. Instead, some aspects of the CWS live on to this day as the U.S. Army’s Chemical Corps, while others transformed into the private chemical industry. Although Americans were initially skeptical, Amos Fries, the leader of the CWS, lobbied the government with an evangelical fervor and poison gases were soon put to alternative uses – to treat and heal lung infections, to control pests and trap animals, to deter bank robbers and ultimately as a lethal tool to administer capital punishment.[4]

While more and more veterans were coming forward with evidence of chemical injuries, the very same gases that caused them harm were being pumped into civilians’ lungs for contradictory purposes: to heal and to execute. The chemical industry successfully became part of the civilian world, and exposures to toxic chemicals began to pervade everyday life.

The story of the connection between chemical warfare and gendered health outcomes will continue in the next installment of this series. Read Part 2, “The Human Experiments” and Part 3, “Over the Rainbow.”

Jana Gowan is a graduate student in the Master’s in Library and Information Science program with a specialization in Media Archival Studies. Her primary research interests include preserving and sharing cultural heritage on film, working with rural communities, and exploring the role of archives and libraries in social justice and reconciliation.