In spite of ardent attempts to constrain their language according to the conventions of their scientific publications, and push back against my provocations, the plants in their stories refused to be contained. An ethnographic researcher currently exploring plant/insect relations, Natasha Myers will be speaking in the Feminism+Senses series from 4 to 6 pm on May 17 in Royce 306. In her talk, titled “Ungrid-able Ecologies: Cultivating the Arts of Attention in a 10,000 Year-Old Happening,” she will be sharing some of her new work on plants. All her work taks innovative and unexpected approaches to documenting 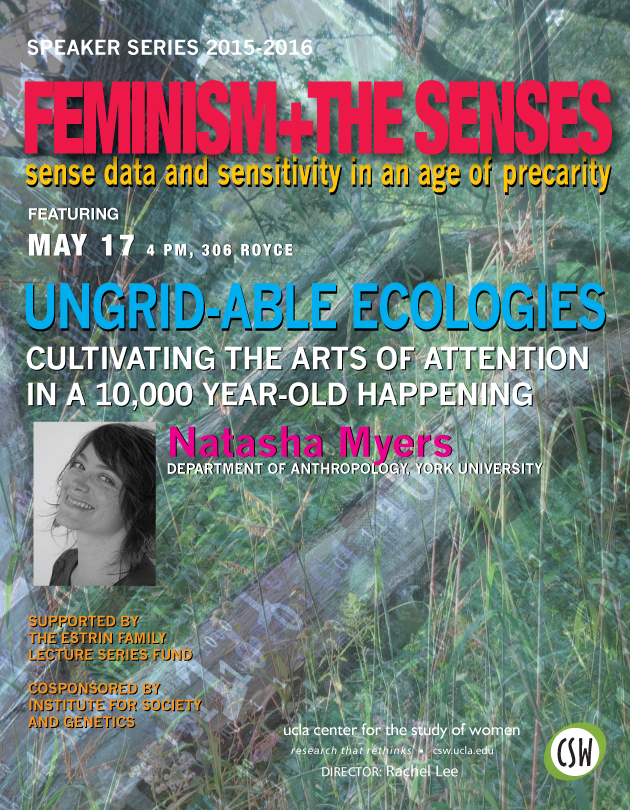 forms of life in the contemporary arts, sciences and ecologies. Writing in 2015 about her early explorations talking to researchers about “plant sensing” (“Conversations on Plant Sensing: Notes from the Field,” NatureCulture 3), she describes the joyfulness in the process: “In these encounters I feed on scientists’ wonder, awe, and excitement about the marvelous worlds of plant sensing and behaviour, and explore how far they were willing to go with their stories of the ‘uncanny,’ ‘amazing,’ and ‘crazy’ things plants can do…. These conversations with practitioners reveal all kinds of productive ambiguities, slippages and ascriptions of agency to nonhuman organisms.”

The Feminism + the Senses lecture series addresses how social movements around gender, sexuality, and race have a crucial relationship to sense data, sentimentality, and sensitivity. It opens up for collective exploration the question of which sensory registers have been favored by our scholarly disciplines where they intersect with feminist and queer activism. At the same time, this series aims to catalyze reflection on the “sensitizing concepts” that have historically been of value to feminist and queer scholarship and those prospective concepts arising in other social justice movements that have yet to become sensitizing to feminism.

Myers’s essays are marked by a lively engagement with the research process and the sensations and feelings connected to the process of theory. In an essay from 2012, “Dance Your PhD: Embodied Animations, Body Experiments, and the Affective Entanglements of Life Science Research” (Body & Society 18:1), Myers examined the proliferation of Dance Your PhD contests around the world and showed that while “dance [can be] an effective distraction for overworked researchers,” this ‘body-work’ helps them to “figure out how molecule 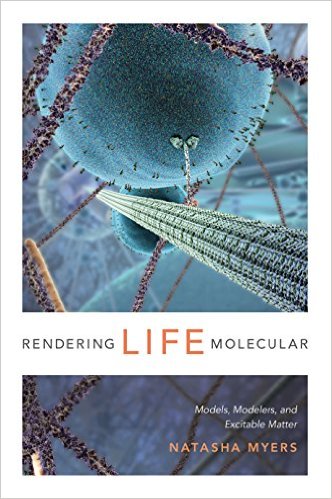 s move and interact, and simultaneously offers a medium through which they can communicate the nuanced details of their findings among students and colleagues.” Such performative modalities, can “expand and extend what it is possible for scientific researchers to see, say, imagine and feel.”

Her feminist practice also incorporates “sensation,” can be seen in “Involutionary Momentum: Affective Ecologies and the Sciences of Plant/Insect Encounters” (Differences 23:3), a essay she wrote with Carla Hustak. Asserting that “this essay draws attention to the affects, sensations, and practices that shape relations in plant/insect ecologies. Over the course of the essay, we unpack the concept of involutionary momentum to explore a feminist approach to interspecies relationality. We draw together feminist theories of affect, difference, and responsibility to articulate what Isabelle Stengers might call an ‘ecology of practices’ among plants, insects, and the scientists who draw their intricate relations into view.” (pg. 78)

In her new book, Rendering Life Molecular: Models, Modelers, and Excitable Matter (Duke University Press, 2015), Myers looks at proteins—what living bodies are made of—and the scientists who model them. Rendering three-dimensional, atomic-resolution models of a substance so lively as proteins is tricky, she says. Such models require, she asserts, more than traditional scientific data. Modelers need to find ways to feel their way “through the data in order to interpret molecular forms.” In the process, she documents practices in laboratories and classrooms to look at how “gesture, affect, imagination, and intuition” shape the scientific process of describing the dance of life. In the intro she writes: “This book develops the concept of rendering to account for both the performance of molecular models as they are made and used, and the performativity of molecular facts, In other words it pays close attention to how particular enactments rend the world as molecular, changing meanings and material realities for practitioners, their students, and wider publics.”

Donna Haraway also extolled Myers’ approach, noting that “bodies in motion—bodies of all kinds and at all scales—dance together in the act of coming to palpable, knowable attention. Further, mindful bodies think best and build richer worlds of knowledge and practice when play infuses work in the symbiosis called science. In this astute and beautifully written book, it is protein models and their people and machines that dance together, tuned to the visceral sensibilities, vital affections, and kinesthetic energies that make the sciences of molecular biology work. Rendering Life Molecular shows in just how many ways biology is a full-bodied practice. Readers will be excited in all the best ways.”

As Lucy Suchman, author of Human-Machine Reconfigurations, declared: “With a lively and engaging style, a commitment to a feminist and phenomenological analysis, and an extraordinary attention to the specificity of scientists’ embodied, material, and affective engagement in the creation of knowledge, Natasha Myers takes the study of the biosciences in a new direction.”

Part of CSW’s Gender Research and Equity Committee initiative, with support from the Office of Interdisciplinary & Cross Campus Affairs, Feminism + the Senses features:

Daphne Brooks (Yale U), ” If You Should Lose Me’: The Archive, The Critic, the Record-Shop, and the Blues Woman,” March 10,2016, 3:30 pm, YRL— cosponsored by UCLA Department of Musicology and the Charles E Young Research Library

Natasha Meyers (York U), “Ungrid-able Ecologies: Cultivating the Arts of Attention in a 10,000-Year-Old Happening,” May 17, 2016, 4 pm, Royce 306, Royce 306 — Supported by the Estrin Family Lecture Series Fund and the Institute for Society and Genetics