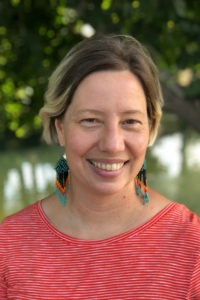 Lara K. Schubert received her PhD in Religion in 2016 from Claremont Graduate University. Her areas of interest are two-fold: (1) exploring theories of subjectivity and empowerment in the context of Cambodia and the friction between Cambodian women who are leaders in their religious communities and Cambodian women in local NGOs, and (2) documenting and analyzing the culture of structural engineering as part of a gender-in-science trajectory.

First, she has undertaken ethnographic research in Cambodia and is interested in post-secular feminism, especially in the way her ethnographic work can challenge unexamined secular presuppositions of feminist thought. This research focuses on intersections of various fields and pursuits: post-colonial and transnational feminism, theorizations of agency and subjectivity, and NGOization of feminism. Her work has especially examined two distinct responses to a traditional Cambodian code of conduct, the chbap srey. Within the NGO community, it is widely condemned, but among women in religious communities, it is widely cherished. Cambodian women who are leaders in religious communities typically have had very different responses than women who are leaders in NGOs aligned with the Convention on the Elimination of all Forms of Discrimination Against Women (CEDAW). This points to a difference in the way these women prioritize their values, which also ties to their subjectivity and recognition as subjects in their communities. These insights connect to insights from feminist relational theorists and contribute to their theorizations. While follow-up fieldwork is on hold due to the global pandemic, Schubert intends to develop her work on Cambodian women religious and Cambodian NGOs into a book manuscript that will suggest new ways of thinking about empowerment.

She has taught in Liberal Studies and Women, Gender and Sexuality Studies at California State University, Los Angeles. Her offerings include Gender in Science, Introduction to Environmental Humanities, and Social Change and Social Movements in the US. She has also taught in the Department of Religious Studies at Pomona College and the Ethnic and Women’s Studies Department at California State Polytechnic University, Pomona. She was awarded a Fulbright Grant for her fieldwork in Cambodia. She has published in Journal of Religion and Human Rights and has various articles in progress, including an article for a special issue of the Journal for Global Ethics.

“Consequences of the Gendered Culture of Engineering.” Structure (2013). http://www.structuremag.org/?p=745.

“Harmonizing Particularity of Religions and Universality of Human Rights: Critique of Traditional ‘Top Down’ Approach and Proposed Alternative.” Journal of Religion and Human Rights, 4 (2009): 25-40.