Maria Josefina Saldaña-Portillo, “Indian Given: Racial Geographies Across Mexico and the United States” 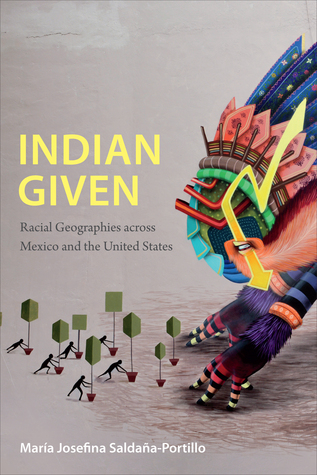 Indian Given: Racial Geographies Across Mexico and the United States

María Josefina Saldaña-Portillo is Professor of Social and Cultural Analysis at NYU and Visiting Professor of English at UC Berkeley. She is the author of The Revolutionary Imagination in the Americas and the Age of Development (Duke University Press, 2003) and Indian Given: Racial Geographies Across Mexico and the United States (Duke University Press, 2016). Indian Given was awarded the Best Book Award from the National Association for Chicano and Chicana Studies (NACCS) in 2017

In Indian Given María Josefina Saldaña-Portillo addresses current racialized violence and resistance in Mexico and the United States with a genealogy that reaches back to the sixteenth century. Saldaña-Portillo formulates the central place of indigenous peoples in the construction of national spaces and racialized notions of citizenship, showing, for instance, how Chicanos/as in the U.S./Mexico borderlands might affirm or reject their indigenous background based on their location.  In this and other ways, she demonstrates how the legacies of colonial Spain’s and Britain’s differing approaches to encountering indigenous peoples continue to shape perceptions of the natural, racial, and cultural landscapes of the United States and Mexico. Drawing on a mix of archival, historical, literary, and legal texts, Saldaña-Portillo shows how los indios/Indians provided the condition of possibility for the emergence of Mexico and the United States.
Professor Saldaña’s presentation addresses the imbrication of NAFTA, narcos, and the legacy of the indio bárbaro.
Date: Thursday April 12th 2018
Time: 3:00pm
Location: Charles E. Young Research Library, Main Conference Room 11360

Organized by the Department of Gender Studies

Nicole George, “Women, Peace, and Security through a Vernacular Frame: Global/local frictions in Solomon Islands and Bougainville” A Dialogue on the Challenges of Minoritized Academic Fields at this Time
Scroll to top