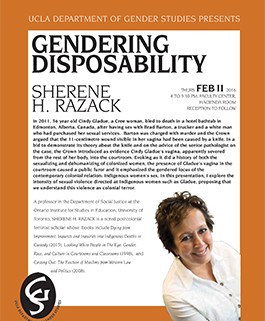 In 2011, 36 year old Cindy Gladue, a Cree woman, bled to death in a hotel bathtub in Edmonton, Alberta, Canada after having sex with Brad Barton, a trucker and a white man who had purchased her sexual services.  Barton was charged with murder and the Crown argued that the 11 centimetre wound visible in her vagina had been caused by a knife. In a bid to demonstrate its theory about the knife, and on the advice of the senior pathologist on the case, the Crown introduced as evidence Cindy Gladue’s vagina, apparently severed from the rest of her body, into the courtroom. Evoking as it did a history of both the sexualizing and dehumanizing of colonized women, the presence of Gladue’s vagina in the courtroom caused a public furor and it emphasized the gendered locus of the contemporary colonial relation: Indigenous women’s sex. In this presentation, I explore the intensity of sexual violence directed at Indigenous women such as Gladue, proposing that we understand this violence as colonial terror.

A professor in the Department of Social Justice at the Ontario Institute for Studies in Education, University of Toronto, SHERENE H. RAZACK is a noted postcolonial feminist scholar whose  books include Dying from Improvement: Inquests and Inquiries into Indigenous Deaths in Custody (2015), Looking White People in The Eye: Gender, Race, and Culture in Courtrooms and Classrooms (1998),  and Casting Out: The Eviction of Muslims from Western Law and Politics (2008).