We pursue feminist, queer, and intersectional challenges to the carceral state.

The United States has the highest rate of women’s incarceration in the world. Only 4% of the world’s female population lives in the U.S., but the U.S. accounts for over 30% of the world’s incarcerated women.1 Between 1977 and 2004, the number of women in U.S. prisons increased by an unprecedented 757%.2 Discourses about gender expand the overall prison system.  Legislators and prison authorities increasingly use “gender responsiveness, “the notion that prisons can be designed to respond to the needs of women and children, to expand prison budgets and justify prison building.

Prisons are unhealthy for women and families.  As a 2015 CSW co-sponsored report revealed, women suffering from mental illness in LA County jails are routinely denied treatment, medication, and reproductive hygiene products, and are disproportionately punished with solitary confinement.

As sites of captivity, prisons and jails are inherently violent; they also foster specific forms of gendered and racial violence including sexual harassment, rape, and retaliation. Even meager avenues for redress have been eroded since the 1990s through legislation such as the Prison Litigation Reform Act. LGBTQ communities are disproportionately impacted: nearly 60% of incarcerated girls identify as LGBTQ, while nearly one in six transgender Americans, and forty-seven percent of black transgender people, have been incarcerated.3 Prisons entrench gender conformity by institutionalizing gender segregation and depriving trans prisoners of necessary health resources.4

Women, especially women (and girls) of color, are routinely criminalized for survival.  In 1975, Dessie Woods was prosecuted for defending herself against rape by a white man in rural Georiga.  Today, we see the legacy of criminalizing survival and survivors in the cases of Marissa Alexander, Bresha Meadows, and many others.  Nearly sixty percent of people in women’s prison nation-wide, and as many as 94% of some women’s prison populations, have a history of physical or sexual abuse before being incarcerated. Black women are almost three times more likely to die at the hands of a current or ex-partner than other women.5

Incarceration and policing undermine reproductive and economic justice, endangering women and children through estrangement and removal, police violence, and inadequate mental and reproductive health services for pregnant women in prison. Incarceration creates economic precarity by draining the resources of families (through the bail system, the exorbitant price of prison phone calls, income and job loss due to court dates and other criminal punishment procedural requirements, tickets, etc.), undermining employment prospects, and subverting the rights of workers.6

The carceral state also threatens feminist futures by consuming resources that would otherwise be devoted to social life: child care, the environment, education, housing, health care, and other institutions that produce material safety and dignity. 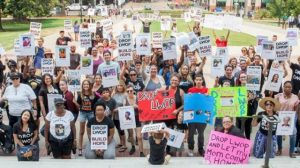 Sacramento rally, organized by the California Coalition for Women Prisoners (CCWP) and Californians United for a Responsible Budget (CURB), as part of the Drop LWOP campaign. Image credit: droplwop.com

CSW Director Grace Hong received a Seed Grant from the Institute on Democracy and Inequality at UCLA Luskin in support of the UC Sentencing Project!

In partnership with the Los Angeles chapter of the community-based organization California Coalition for Women Prisoners (CCWP), this pilot study will analyze data acquired from the California Department of Corrections and Rehabilitation and collect and analyze original data gathered at the California Institution for Women (CIW) on the effects of long-term prison sentences on California’s communities. This data will allow community members and policymakers to understand how long-term incarceration affects Los Angeles and other California communities. This research project will track how gender, race, socioeconomic status, region/county, and other factors influence the length of sentences and parole decisions. The team will prioritize a participatory action research model that centers the perspectives and insights of incarcerated and formerly incarcerated people. The team will conduct community-based workshops with formerly incarcerated members of CCWP as part of the project design, in particular, the survey development.

A collaboration between the Center for the Study of Women,the Drop LWOP Coalition, and the Felony Murder Elimination Project, the Special Circumstances Conviction Project (SCCP) analyses the prevalence and impact of the use of special circumstances in criminal sentencing in California.

Under California law, “special circumstances” delineate the conditions under which people can be sentenced to life without the possibility of parole (LWOP). Despite the severity of the sentence and its impact on California’s communities, there has been to date no comprehensive collection or analysis of what specific convictions have led to over 5000 people serving LWOP, nor how race, age, gender, and other factors may affect the sentences they receive. Initiated by Joanne Scheer, co-founder of the Felony Murder Elimination Project, and Daniel Trautfield, Drop LWOP policy analyst and organizer, SCCP collects and analyses data gleaned through Public Records Act Requests and disseminates findings to legislators, policymakers, non-governmental organizations, scholars, and impacted communities. 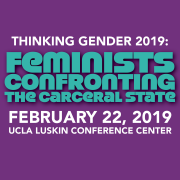 Thinking Gender is an annual public conference highlighting student research on women, sexuality, and gender across all disciplines and historical periods. The 2019 Thinking Gender theme was Feminists Confronting the Carceral State.

Watch videos from the conference on CSW’s YouTube Channel.