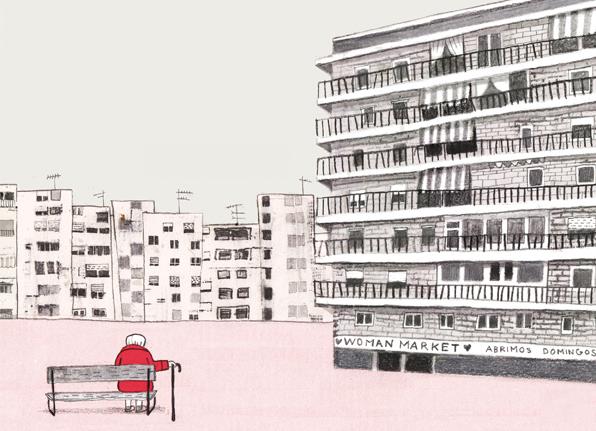 In 2018, Ana Penyas became the first woman to win the National Comic Award in Spain for Estamos todas bien (We women are all fine) (2018),1 a beautifully crafted graphic novel that rescues her two grandmothers’ memories of struggle during General Francisco Franco’s dictatorship (1939-75). The recovery of the voices of Francoism’s victims has been central to Spain’s transitional justice but the efforts reveal limitations when works by women like Penyas are the exception.

Memories offer an alternative to institutionalized historiography and serve as a site of contestation for official narratives. General Francisco Franco took it upon himself to erase the memory of his opponents, both metaphorically and literally, by killing those who had fought for democracy against fascism and making them disappear. In the 2000s, 35 years after the regime had ended, the experiences of the political prisoners and victims of the dictatorship started to be shared and amplified thanks to the Association for the Recovery of Historical Memory, which unearthed the corpses and, in a sense, revived the voices that were buried in mass graves all over Spain. Most of the stories revolve around the war, and the men who fought the war, as the most eventful manifestation of the conflicts of the time. Thus, narratives have traditionally been shaped by men’s discourses and accounts about their needs, their perspectives, their sufferings, omitting those of women and gender non-confirming people.

Comics are especially important because the narratives by women in this specific medium interrogate the masculine canon of historical memory by incorporating feminist claims and demands into the symbolic construction of memory, trauma, identity, and nationhood. Comics created by women reveal an underlying struggle sustained for centuries across borders and times, that found no physical place, no trenches, and no chronological map of the conflict but that was fought on every street, in every house, and in word. My dissertation about historical memory in Spanish graphic narratives focuses on gender and the subtle but powerful imbrications between masculinity and war stories, as well as on masculinity and canon formation in history and in graphic narratives. Ana Penyas’s Estamos todas bien challenges nationhood and demonstrates that political repression was only one of the many factors that contributed to marginalization. In this sense, her work opens the floor to a plurality of voices unheard of before.

For the Modern Language Association Annual Conference (January 2020), I compared Estamos todas bien with El ala rota (The broken wing) (2016),2 a prestigious graphic novel created by two men, Antonio Altarriba and Kim. Both Estamos todas bien and El ala rota focus on the undervalued work and lives of women who devoted their existence to care for others as housewives, mothers, and daughters. However, I deconstructed Antonio Altarriba’s work—the most influential comic author in Spain today—to show how an intersectional feminist perspective is necessary in order to understand how sexism continues unnoticed over time between the present of the authors and the past their works try to rescue. Ana Penyas’ feminist approach distinguishes her work because it constitutes an exploration of structural inequalities that extend beyond the dictatorial regime until the present day.3

In Spain’s cultural production, women have been relevant to historical memory either as militiawomen or as the carriers of the memories of the fallen, who were mainly men. Depending on their roles, women’s voices, dismissed as background noise, occasionally make it to the foreground. As the “sufferers” who kept their relatives’ memories alive, they erase themselves from the stories and “narrat[e] their memories in women’s most traditional way – ‘to live for others.’”4 In contrast, militiawomen’s lives come to the forefront of history only because they participated in an overwhelmingly masculine activity—war.

However, the comics I discussed bring women’s stories as caregivers to the forefront in a groundbreaking shift that is unprecedented in other forms of cultural production. In Petra, Maruja and Herminia, the protagonists of El ala rota and Estamos todas bien respectively, the struggles of what María Ángeles Durán terms the “cuidatoriat”5 – the social class of caregivers, overwhelmingly female – come to life. Altarriba’s graphic novel reflects upon the way he erased and distorted women like his own mother in his texts. He wrote El ala rota to remedy Petra’s portrayal as a hateful character in his father’s biography, El arte de volar (The art of flying) (2009)6 because, as he himself explains, “I had been unfair to her. The character of my mother didn’t deserve the way I treated her in the comic, a sanctimonious and frigid counterpoint to the epic-rebellious-tragic life path of my father. One could say she was there just to make him stand out.”7 To compensate, El ala rota shares Petra’s perspective by highlighting her life circumstances, especially the ways she navigated through an extremely patriarchal dictatorship.

Yet El ala rota is a problematic archive because Petra’s biography was reconstructed by her son and her brother after her death. In this sense, like Art Spiegelman’s Maus8 – the quintessential graphic novel about memory – the two men produced what Marianne Hirsch calls an “orphic work,” which is “a masculine process facilitated by the encounter with the beautiful dead woman who cannot herself come out and sing her own song.”9 Even though Hirsch is speaking of Anja, Spiegelman’s dead mother, her analysis could be applied perfectly to the reconstruction of Petra’s life by other men without her first-hand testimony. Although Altarriba tries to honor his mother’s experience, I argue that there is very little reflection about his own positionality or how his graphic narrative shapes historical memory.

Ana Penyas, on the other hand, includes the interviews with her grandmothers in an intergenerational dialogue where these women are allowed to have and voice their opinions. Penyas’ style incorporates drawings of fabric patterns to subtly draw attention to housework as something to be valued instead of ignored. I read Penyas’s work as a form of “craftivism” that subverts stereotypes depicting domesticity as “passive, benign and predominantly female work.”10 At the core of Estamos todas bien lies a social justice feminism for people of all genders. Although the grandmothers’ memories help to understand structural forms of discrimination against women, their own disapproval of non-conforming gender subjectivities evidences other forms of intersecting discrimination. Estamos todas bien problematizes the discourse on women’s oppression, calls for a wider array of memory narratives, and acknowledges the plurality of experiences that constitute historical memory. This process portrays memory as a mosaic of voices intersected by various social tensions and forms of marginalization.

Penyas’s comic exemplifies the shift from sites of memory to dynamics of memory—how activism can mobilize the past to shape the future. The author’s active participation in Spain’s 15M movement—a massive protest during the 2008 crisis that resulted in a one-month sit-in before Madrid’s City Council—informed her oeuvre’s commitment to social, spatial, and transitional justice. Estamos todas bien frames women’s roles in historical memory within a larger struggle for civil rights than El Ala Rota was able to do. In this new approach to historical memory, I contend the shift from the arena of war to the arena of the city reveals itself as a central step.

My dissertation argues that a gendered approach to Spanish graphic novels is crucial for understanding the symbolic treatment of historical memory. The mutual legitimation between the claims for justice that accompany the topic and the marginal nature that characterizes comics have fruitfully spearheaded a break from the masculine war canon and advanced discussions on social justice. In my talk, I evidenced that a feminist approach like the sophisticated work by Ana Penyas is essential to a diverse and inclusive construction of historical memory in Spain.

Esther Claudio is a PhD candidate in Spanish. She is interested in the particular mechanisms that comics use to explore diegetic and extradiegetic rendering of time and space, trauma and memory, identity and nationhood. Her dissertation focuses on memory in post-francoist Spanish graphic narratives. She explores how the mutual legitimation between the claims for justice that accompany the recovery of the past and the marginal nature that characterizes comics have led to a fruitful break from the masculine war canon and advanced discussions about social justice. Claudio is a recipient of a Spring 2020 Travel Grant.