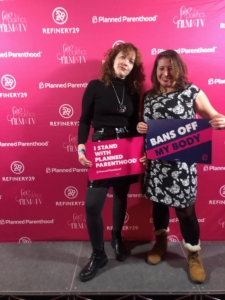 Photo of author and her writing partner, Meryl Branch-McTiernan, at the Sundance Film Festival’s Planned Parenthood party (with author’s permission).

Tyrrell and Meryl (both names rhyme with feral) infiltrated the festival’s opening weekend armed with look books for their sex-positive feature film in development, ‘The Dropout”. They were hopeful to make connections with producers for their female-centric project, despite the industry’s dismal track record of supporting such projects. In 2019, only 14 percent of directors and 20 percent of writers in the top-grossing 500 films were women.[1]

Below is Tyrrell’s diary of an event-filled six days at the festival.

It’s difficult to find the condo in the dark with an Uber driver who is as much of a tourist as I am (many drivers come from out of state to make money at the festival).  Once safely inside, I find the condo empty; the large group of female filmmakers who are sharing the condo with me are all out and about. I throw on some makeup and warm clothes, and pack my bag with look books. I catch a late-night bus to meet up with my writing partner, Meryl, at the Sundance New Frontier Party. Meryl had arrived the day prior.

At the party, Meryl and I show our look books to other filmmakers. They seem impressed—but are they just being nice? Last call at the bar occurs at 12:30am, due to Utah’s strict drinking laws. But we don’t mind an early night; we have a long weekend ahead of meetings, movies, and parties.

At the NYU Tisch party, techno music blasts as waiters carry plates filled with wine and hors d’eouvres through a crowded party. “Good morning, Park City!” I think as I drink a glass of chardonnay before noon. I bump into a fellow female director from Los Angeles who is also on the hunt for a producer. We trade tips and pump each other up for the festival.

I run into MFA screenwriters at the UCLA party—it’s wonderful to connect with my fellow scribes in the midst of this madness. Meryl and I continue to show the look book to other filmmakers, and we are encouraged by their positive responses.

We have our first meeting with a female producer at a coffee shop on Main Street.  She connects with the idea of a woman making bad choices in a romantic relationship, as our lead character does in “The Dropout”. She asks to read the script! One “yes” for one meeting so far!

After a long day of panels and films, we end up at the UTA mansion party, but we aren’t on the guest list for the exclusive bash. So, an old friend and cinematographer sneaks us in. On the veranda overlooking snowcapped mountains, we happen to meet another female producer. We show her our look book. She loves the project and wants to read the script. Two for two so far!

We arrive early for the USC party (I’m an undergraduate SC alumna) to meet up with a producing team. The line is long. Once we get inside, we dive into the nitty-gritty of our film’s possible production for an hour with the producing team. I’ve never talked so much in my life, but the producers ask to read the script, so something’s working. Three for three!

We head over to a party hosted by The Black List, one of the most respected taste makers in the industry. At the bar, we bump into a female filmmaker with a body-positive script she intends to direct. We instantly connect and trade resources.

Meryl and I stop by the Femme Fatales-hosted party. The Femme Fatales, an inclusive community of women feature-film and television directors, is one of my favorite organizations and one that I hope to join once I’ve directed “The Dropout”.

Meryl leaves the condo to take a flight back to New York. I’ll be solo for the next two days. I’d be nervous if I weren’t so exhausted. But the clock is ticking—so I get myself in gear.

I head to a panel hosted by Tubi, a burgeoning streaming service, to hear producers and executives discuss opportunities for indie filmmakers in the digital space. At the reception afterwards, I meet a young, up-and-coming female filmmaker, and we join forces to network at the party. We meet a development executive, and I pitch him “The Dropout.” He’s interested in reading the script and we exchange information. Four for four!

I cram on my UCLA homework. I’m a still a student after all.

I hit send on my homework email and then venture out to meet up with my new filmmaker friend from the Tubi event. We check out a few parties on Main Street.

Through an invite from a condo roommate, I attend a panel focused on equitable filmmaking. To my surprise, I find the panel is more like an intimate workshop. I get to pitch my project to the panelists, including one of my heroes, a trail blazing female producer. After the panel, she graciously invites the attendees to submit their projects to her. I promptly email her the script. Five for five!

Exhausted, but still high from the whirlwind that was the festival, I arrive at the SLC airport. My cinematographer friend happens to be on the same flight, so we sit together on the plane ride home to Los Angeles.

Note: Tyrrell and Meryl recently attached a talented female producer, Cassandra Jones, for “The Dropout.” The all female trio has partial financing in place and is launching a crowd equity fundraising campaign shortly, with the intent of shooting the film in the summer of 2021.

You can get updates about “The Dropout” on the project’s Instagram page: https://www.instagram.com/the_dropout_feature/.

Tyrrell Shaffner is an MFA student in Screenwriting. She explores trauma and desire through the lens of comedy. She also holds a BA in Film Production from USC. Shaffner is a CSW Spring 2020 Travel Grant recipient.

[1] Martha D. Lauzen, “The celluloid ceiling: Behind-the-scenes employment of women on the Top 100, 250, and 500 films of 2019,” Center for the Study of Women in Television and Film, San Diego State University (2019): 9, https://womenintvfilm.sdsu.edu/the-celluloid-ceiling-behind-the-scenes-employment-of-women-on-the-top-u-s-films-of-2020/.