I step into the glass passage where air conditioning and air that is thick with wet heat converge. The Maryland Office of Vital Records is busy. The snaked line is moving slowly. The chill is most readily memorable but is a false start. 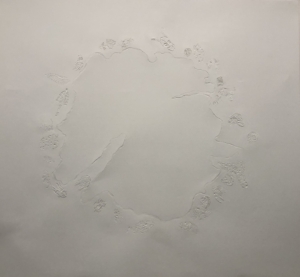 “I could hear music somewhere though, somewhere
in a distance backward or forward,
time split like willows” (Dionne Brand, Ossuaries)[1]

I saw my father’s missing persons police report in mid-July, time stamped three years prior. The photograph, a carceral projection and (dis)identification, defied linear time, existing both in an elsewhere and in present-tense encounter, inciting both a false start and a dead-end.

“events happening in their order
a certain regularity,
which leads you to believe fancifully,
in coincidences” (Brand, Ossuaries)[2]

Waiting in line, I search for clarity in the corners of my mind: what has brought me here? What primacy to truth animated seeking official record as a precondition for legitimate mourning? What detachments, what dislocations, what evasions made the record recursively inadequate? I have come under the impression that knowing provides immediate relief to an ache. Knowing, in this case, both a false start and a dead-end, encroaches upon the veil of truth, as the fact of official record sometimes does very little to clarify or soothe the injury.

It is clear that there is no relief within the terms of the given.[3]

The air conditioning is audible from all four corners of the room. I exit the office through a different door than I entered.

What caused me to fall to my knees in the parking lot was its obvious negligence, a single page that mandates conclusion, if by its sheer vacancy.

“We can agree, I think, that invisible things are not necessarily ‘not there’; that a void may be empty, but it is not a vacuum. In addition, certain absences are so stressed, so ornate, so planned, they call attention to themselves.” (Sharon Holland, Raising the Dead)[4]

Moments of deep pause that recurrently carve intervals in my place of being, always, and already, undermine the presumed fixity of the past in the archival form of official record. At the point of pause, the start keeps shifting. The dead-end exposes a limit.

My work has become to attend to my deep mistrust of the process by which that-which-we-cannot-know is recast as an official record, containing both historical magnitude and juridical significance. Wherein death’s prognoses as natural or unnatural borrows from the white humanist grammar of the subject that grants this binary legibility in the first place.

If the death is defined in the terms that foretell its inevitability, its knowability, then I am suggesting unknowability, not as a foreclosure of elaboration, but as a different point of entry.

“Because Black rebellion, fugitivity, and errant movement was so hard­­—in fact, impossible—to contain, the White imagination continually had to invent and rewrite a strategy of capture.” (Tiffany Lethabo King, The Black Shoals)[5]

“Demonic ground alludes to the sublime because it gestures toward the superempirical, exceeding the empirical because it sets scale and the terms of scale’s legibility; therefore, such a sublime capacity requires us to think the limit of representation and conceptualization beyond the representationalist terms we might associate with the iconicity of ‘the black female body.’” (Zakiyyah Iman Jackson, “Theorizing in a Void”)[6]

While performing archival research at the National Maritime Museum in London, I documented a note by slave-trader and ship captain John Newton in his journal of their journeys aboard the Duke of Argyle (1750-1754). He wrote of a slave who died en route to Antigua: “This morning bury’d a woman slave N. 47, know not what to say she dy’d of, for she has not been properly alive since she first came on board.”[7]

“The captivating party does not only ‘earn’ the right to dispose of the captive body as it sees fit, but gains, consequently, the right to name and ‘name’ it…” (Spillers “Mama’s Baby, Papa’s Maybe”)[8]

Newton, as a rational observer, as a possessor of reason, divulges the impasse that arises in his, albeit, failed, attempt to name the evasive aliveness. This “I” that is the condition of possibility for the metrics of observation that narrate proper aliveness from something else, is unmoored by the incoherence of the unnamed woman’s condition of arrival and departure.

“What does history realize when ‘becoming’ unfolds before the horizon of death?… Whatever blackness threatens to bring into (modern) representation will render the speech of man one, and just one possible reference to the ontological context in which the black and the white man emerge as such.” (Denise Ferreira da Silva, Toward a Global Idea of Race)[9]

The point where one man’s position in relation to the not-deadness and the improper aliveness of the captive flesh reveals the epistemological quandary that emerges from the haunting and deprivation of a phantom corporeality, from which a subject cannot appear.

“One cannot ask, ‘Who is Venus?’ because it would be impossible to answer such a question.” (Saidiya Hartman, “Venus in Two Acts”)[10]

Undisciplining: a practice by which one sabotages the obsessive will to know by naming the terms of the knowledge-apparatus as antagonistic to the unfolding of Black life; where “the normal” is in contention.[11]

Points of asynchrony—the misprision or the misperception[12]—are conspicuous from the position of wanting to unravel Man’s domain. As an exercise in naming the stakes, “radical consciousness in action resolves into liberated life-ways, however provisional, present and past.”[13] Such is the guiding principle of this historical project.

“…fictions instead arise out of the indeterminacy and flux of living and dying, with life being perhaps the greatest fiction of all…” (Tavia Nyong’o, Afro-Fabulations)[14]

“That means we’re still worrying about what they think rather than developing the discipline we need to communicate with each other.” (Paul Gilroy, “Living Memory: a meeting with Toni Morrison”)[15]

In the tradition of calling fictions fictions, Black feminist foresights and insights have profoundly affected my mourning by offering world-bending lucidity and opportunities to be in relation that bring me closer to myself and my questions. In February 2020, in a workshop I attended, Professor Kevin Quashie shared the every-day encounter he has with the question of how am I to be? He divulged (couched between an outpour of generous delicacies): Your life is as good as any other as a place to sit and study.[16] If the terms of the given make certain lives unimaginable, perhaps we can sit and study in ways that support us in imagining ourselves.

“I work a lot with unknown persons, nameless figures, ensembles, collectives, multitudes, the chorus. That’s where my imagination of practice resides. That’s where my heart resides.” (Hartman, “On Working with Archives”) [17]

Kali Tambreé is a PhD student at UCLA in Sociology. Her work largely considers historiographic and archival accounts of living and dying in the Middle Passage of the transatlantic slave trade. She is from Baltimore. Tambreé is the recipient of CSW’s 2019-2020 Penny Kanner Dissertation Fellowship.

[11] Brand, Dionne, “On narrative, reckoning and the calculus of living and dying,” Toronto Star, July 4, 2020, https://www.thestar.com/entertainment/books/2020/07/04/dionne-brand-on-narrative-reckoning-and-the-calculus-of-living-and-dying.html.