When I visited the Buddhist Center to get permission to conduct interviews and participant observations, a female renunciant met me and ushered me to one of the main buildings, the monks’ quarters, where chairs and tables had been set up. Two younger monks sat across the table and three female renunciants sat on my side of the table. The female renunciant who led us to the meeting space dusted the tables and got each of us a sugary drink and a bottle of water. The monks across the table asked me questions to find out what I wanted to do at the Buddhist Center. Because they knew I was interested in women renunciants, there was also time allotted to tell me about the women who lived at the center, the donji.

Donji is the Khmer term for a female Buddhist renunciant who lives at a wat (Buddhist temple), but who is not fully ordained as a monk, as within Cambodian Buddhist tradition ordination as a monk is no longer accessible to females. A donji dons the white robes of a renunciant, shaves her head, and does not eat solid foods after noon. She takes on a set of precepts, but does not take on all of the precepts of the vinaya (the part of the Buddhist scriptures that focuses on rules), which are required for monks who are members of the sangha (the Buddhist monastic community). When it came time to talk about the lives of the female renunciants at the center, the donji to my left who wore glasses did most of the talking. I will refer to her as Lok Yiay. 1

Lok Yiay lived at the Buddhist Center. She was in a later stage of her life (perhaps in her early 70s), as was common for donji, who had typically already lived as householders or laypeople, and had often fulfilled roles as wife and mother. Reflecting back on my time with Lok Yiay in 2013, I now see glimpses of the decolonial concept of “re-existence” in her story of going forth to become a donji and, more importantly, in her embodied conduct.

“Re-existence” a term from Adolfo Albán’s work, is used by Catherine Walsh and Walter Mignolo in the first in a series of books they have edited that showcases decoloniality. In the book, On Decoloniality, they reference “re-existence” again and again, which they explain as related to resistance but also distinct from it.

Drawing from Adolfo Albán’s use of “re-existence,” I want to highlight how these Cambodian women renunciants are not fighting against restrictive rules or exploitative systems, but creating “something other” (an aspect of the term that Walsh and Mignolo also stress). Instead of resisting capitalism, they are acting as what I like to call “bad capitalist subjects,” and living dignified lives centered around values that differ from capitalist values.

Walsh quotes Albán in her explanation of the place of re-existence in decoloniality. She writes:

While not accepting could be termed resistance, our interest and proposition here are, more crucially, with re-existence, understood as ‘the redefining and re-signifying of life in conditions of dignity.’ It is the resurgence and insurgence of re-existence today that open and engage venues and paths that take us beyond, while at the same time undoing, the singularity and linearity of the West.2

As I mentioned above, this re-existence is embodied by Cambodian women who are leaders in their religious communities.

In decolonial thought/praxis, originally theorized from a Latin American context, the inseparability of modernity/coloniality forms a key concept. Introduced by Quijano, this logic foregrounds the idea that modernity is dependent on coloniality; the two are inseparable.3 This logic poses as a universal epistemic of coloniality (e.g., not tied to geography), but also results in particular forms of instrumentalization of people for the aims of capitalism. One material instantiation of this is global capitalism, by which capital is funneled to the pockets of the few, leaving the populace of the global south (and particularly the former colonized) especially exploited.

In Cambodia, the logic of modernity/coloniality holds to a great extent, but certain aspects of decolonial thought/praxis are emphasized, while others are de-emphasized. Especially in recent years, China has been the most important colonial power in Cambodia. A Chinese version of modernity might be said to differ from a parochial Western version of modernity/coloniality. Some of the alleged virtues of (Western) modernity, like human rights and individual freedoms, are not part of China’s purported values, and are not intrinsic to the (sometimes termed) “authoritarian” capitalism China espouses and expresses. Hence, in this context, it is appropriate to emphasize resulting material implications of coloniality rather than epistemic aspects of coloniality.

In my research, I found that the female leaders at Buddhist and Christian communities in my study were not concerned about achieving release from social rules. They did not resist the system that led to dire economic prospects for many in the country. Years after the initial research, after I was introduced to the idea of re-existence, I perceive that many Cambodian women demonstrated re-existence rather than resistance. Women in both Christian and Buddhist communities were not resisting the status quo, expressing dissatisfaction with religious rules or societal norms. They were also not overtly anti-capitalist. But, in their vocations, they were living life within a different logic from the seemingly all-encompassing capitalist logics of modernity/coloniality.

Lok Yiay’s story serves as an example. Her story of going forth or becoming a donji was tied to leaving a business-focused life and work as a vendor. She explained that she realized that selling coconuts didn’t have any benefit for her. She thought of her next life, of dying, and of having peace. She had three employees that thought only about making a living, and she decided to go live at the wat instead. 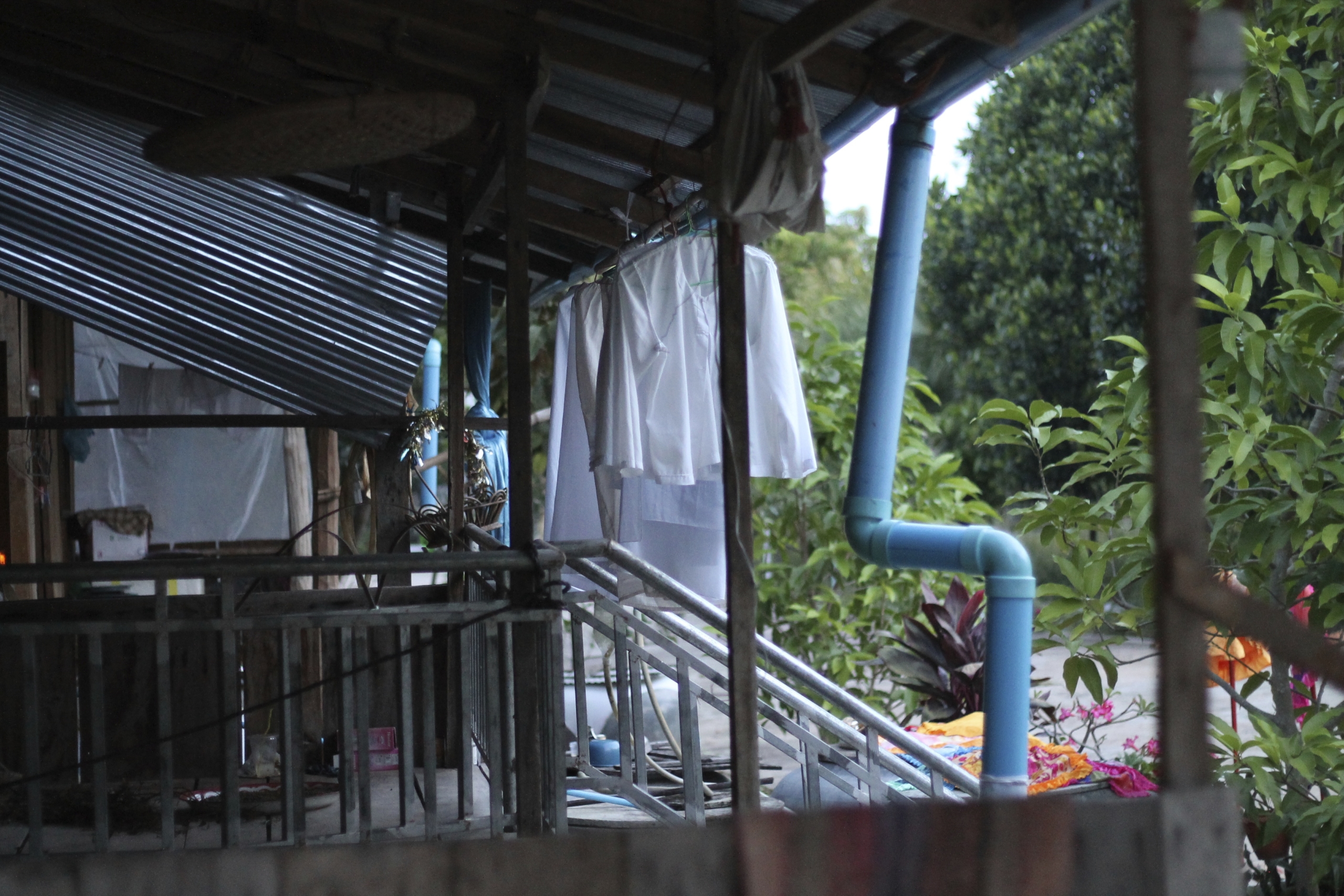 Living quarters of donji at the Buddhist Center. You can see these female renunciants’ white robes drying after a wash. Photo by author.

Lok Yiay went to the wat to hear the famous monk teacher Som Bun Thoeun speak the dharma [the nature of reality in Buddhism]. He spoke of abandoning whatever is outside of us and thinking about what’s inside of us. Lok Yiay explained that we try to find things to make us happy, but we need refuge (which doesn’t come from outside). The very next day after the lecture, she went to build a hut at the wat (to renounce). Image of now-deceased famous monk teacher Som Bun Thoeun at the Buddhist Center.  He was shot and died in 2003. Photo by author.

Her realization was not one in which she decided to take on the structure that required money-making. Instead, she changed her life and reordered her values to live a life that no longer prioritized capitalist values.

In her quotidian behavior, which she felt was quintessentially Cambodian, she lived out those values and backgrounded capitalist ideals. When I asked her about her conduct (and whether it was like the conduct prescribed in the traditional Cambodian code of conduct), she explained it was somewhat similar:

… I have good manners and am gentle. We Khmer women—it’s not behaving like foreigners. Foreigners, when they do something—how do I want to say this so you understand—like the behavior of foreigners when they do things it’s all hurried, you see. If we are talking about Khmer women in the chbap srey, (a traditional code of conduct for women) when we do something, we do it slowly [and carefully], right. I am satisfied with this but in a situation where there’s an official aspect, we don’t do too much like this. It’s only that we don’t like to strive to get material things quickly, okay.4

Lok Yiay demonstrated this conduct in our encounters. In our first meeting (recounted in the introduction), she told me how many donji lived at the center, explaining that some of the women took only five precepts while others took eight or 10. She also talked about how donji educate the children. She was confident, but also turned to the monks before and sometimes during her answers, inviting the monks to help her or correct her if need be. When she spoke to the (clearly younger) monks, she would generally put her hands together as a sign of respect. When one of the monks asked her a question, wanting her to address something specifically, she said chob sen (literally “stop first”) meaning “wait for me to finish first.” Similarly, when I asked an interrupting, clarifying, question she said the same to me. She was confident but respectful. She was not silent, but also not overly animated. She demonstrated the conduct that she felt was quintessentially Khmer and part of her tradition.

Lok Yiay’s conduct exemplified re-existence in the face of capitalism, an embodied re-existence rather than resistance. She did not condemn a capitalist way of life. She was not even free of capitalism, but continued to live within the system. While she renounced and no longer dedicated most of her time and efforts to working and earning money, she still depended upon a government stipend and financial support from her son. Still, Lok Yiay’s embodied Cambodian Buddhist values usurped capitalist values. Rather than enacting the value of “time is money,” and conducting herself in a hurried way, she was led by an alternative set of values to behave deliberately and carefully in what she identified as a slower way. Her embodied values—prioritizing intentionality of Cambodian conduct over a time-is-money capitalist comportment—showed that while Lok Yiay did not explicitly resist the colonial capitalist system in which she lived, she was living out a re-existence in the face of its power.

Lara K. Schubert received her PhD in Religion in 2016 from Claremont Graduate University. She has taught at California State University, Los Angeles, and at California State Polytechnic University, Pomona. Schubert was awarded a Fulbright Grant for her fieldwork in Cambodia. She has published in the Journal of Religion and Human Rights and has a number of articles forthcoming, including an article for a special issue of the Journal for Global Ethics. She is a CSW Research Affiliate and received a Tillie Olsen Research Grant from CSW in 2020.

The author would like to thank Ann Hidalgo and Drew Baker for their helpful comments.