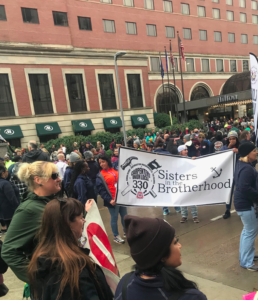 Although women make up almost half of the workforce, they make significantly less money than their male counterparts in nearly all fields.1 Research suggests that more than half of the wage gap can be attributed to occupational segregation—the fact that women and men tend to work in different occupations and sectors of the economy.2 In addition to pay concerns, women disproportionately face the threat of sexual harassment in the workplace. For women looking to move from low-wage work to work that can sustain a family, “middle-skills” jobs in the trades can help lift them out of poverty or economic hardship.

Despite this positive attribute of trade jobs, the US workforce has been unable to fill them. A 2017 report estimates that 70 percent of employers in the construction and skilled trades industries are having a hard time finding skilled workers, and six out of every ten positions in manufacturing alone are going unfilled as a result of the growing skills gap.3 As half of the US population, women could be a huge part of filling that deficit. Although women are willing and able to work in these trades, they represent only 10.8 percent of construction and building inspectors, 3.1 percent of first-line supervisors of construction and extraction workers, and 2.2 percent of pile drivers, operating engineers, and other equipment operators, for instance.4 Besides the lack of opportunity for women to get hired, the best-paying “middle-skills” jobs are often in predominantly male fields, with high levels of harassment, and women who get those jobs could ultimately find themselves pushed back out.

In March of 2019, I traveled to Washington DC to intern at the National Women’s Law Center (NWLC) to conduct independent research. I set out wanting to build on my prior research interests and explore the intricacies of the wage gap, paid family leave, and other workplace inequities, as well as the policy solutions to address them. Working with the TIME’S UP Legal Defense Fund team, however, the issue that came up again and again from the people we worked with was sexual harassment and violence in male-dominated fields, with strikingly similar accounts coming from across industries. I spoke with my director about the prevalence of the issue, found that there was limited academic research centering these women, and decided to shift my research to document some of their experiences.

For the next eight weeks, I phone-interviewed 16 women in the skilled trades about their experiences in the field, and compared their responses to the existing literature on the topic. I listened to what each tradeswoman proposed as necessary change, with some of them being optimistic, and some unable to imagine anything changing for the better in their lifetimes. What they described was a sector direly in need of reform and support for survivors and tradeswomen of all identities. In recognizing that people who have been subjected to sexual harassment may identify in different ways at different times, I chose to use both the terms ‘victim’ and ‘survivor’ in my research and in this blog.

My research examined whether experiencing sexual harassment drives women out of male-dominated, “middle-skills” jobs, and if so, how that happens. To select interviewees, I reached out to the Tradeswomen Taskforce asking to be put in contact with women in male-dominated fields who would like to discuss their experiences with harassment. One woman in the Taskforce posted the request in several tradeswomen Facebook groups, and many women very quickly reached out to me to discuss. I responded to everyone who reached out, and had the privilege of learning about the experiences of these women first hand. The women were from all over the country, and ranged in trade from construction workers to union pipefitters and everything in between.

The results of the interviews suggest that harassment does drive women out of male-dominated, “middle-skills” jobs, specifically in the trades, and at a relatively high rate. While some women endure the harassment for decades or even their entire careers, I found that a majority of women, especially if they report harassment, are driven out of their jobs regardless of how much they want to be there. A large majority of the interviewees had seen multiple examples of women being driven out of work, either in their specific trades or in other trades with women they knew or had worked with. More than half of the interviewees had left their jobs because of harassment, with several more leaving or finding themselves unable to return for related reasons. Those who had never left, never seen anyone leave, or both, expressed that they had several mechanisms for dealing with it. These ranged from confronting the harassment in person to enduring or avoiding harassers, but they said it took a toll on them either way. These findings are in line with the literature showing the link between harassment and job change. Though this study uses a small sample, the wide diversity of occupations within the skilled trades that they come from, and the small number of women in these fields in the first place, means that their stories provide important and far-reaching insights.

The interviewees’ experiences confirm that the solutions must be multipronged. Victims of harassment need legal protections and enforcement, but also substantive policy changes and transformation at higher levels. The trades need leadership from industry leaders and decision makers to ensure that survivors do not just have protections once the harassment has already happened, but before it even occurs. Creating a pipeline for more women to enter these trades is a first step, but it must be supplemented by improved workplace harassment protections and retention strategies, so women are not pushed back out. Employers must respect the legal right of women to report and combat retaliation efforts, and complaints must be taken seriously. When the harassment is so severe that the perpetrator needs to be removed from a job, protections must be in place that ensure the victim’s rights and ability to work are not compromised. For cases where women want the harassment to stop, but not necessarily to have their coworkers removed (as occurs in a majority of cases), researchers are exploring the benefits of restorative justice and other less punitive solutions.5

In today’s environment, just a year later, the coronavirus has changed life as we know it and the world is in many ways a different place. Sexual harassment and assault, at home, online, in the workplace, in healthcare, and elsewhere, however, remain rampant. As I write this, Education Secretary Betsy DeVos has diminished Title IX protections for student survivors, the coronavirus is making its way across the globe, and the Black Lives Matter movement is growing domestically and internationally, sparking cries to defund the police. Meanwhile, domestic violence, one of the most longstanding global pandemics, is reaching historic numbers due to quarantine lockdowns.6 Most domestic violence survivors are women, children, and LGBTQ+ individuals—among them also tradeswomen.7 And with the systemic injustices of the criminal legal system coming into the spotlight once again, survivors domestic or workplace sexual violence and harassment could be even more hesitant to come forward to the police or other authorities. For those survivors who do come forward, very few offenders get charged, prosecuted, or face any legal consequences.

In the skilled trades, like in so many industries, work is slow during the pandemic, but virtual or remote work is often not an option. Many of the interviewees said that women are the first to go when there are job cuts; they considered it highly plausible that tradeswomen face higher rates of shutdown-induced unemployment than their male counterparts. Across the country, unemployment is disproportionately affecting women of color.8 In many states, workplaces are opening back up before it is safe to do so in order to stimulate the economy, rather than providing payment or loan/home/rent relief, etc. For those whose jobs are continuing, the work is even more dangerous with the threat of COVID-19. If the past is any guide, it is not hard to imagine that supervisors are taking harassment complaints even less seriously by arguing that they have more important things on their plates. As we face an oncoming recession, so-called austerity measures by companies in all industries, including the trades, are likely to roll back already under-invested on-the-job improvements, including diversity and safety efforts for tradeswomen.

At the same time, national and global awareness for the #MeToo movement and injustices against BIPOC communities are creating openings for transformation that did not seem possible a short time ago. The coronavirus pandemic and the systemic racism plaguing the US are making people reimagine what “normal” could look like. As more Americans face unemployment than in any time since the Great Depression, the skilled trades can employ people with competitive wages, while building and restoring vital infrastructure, from old roads and bridges to the foundations needed to build a green future.9 However, in order to ensure the promise of the skilled trades to lift women, LGBTQ+ individuals and people of color out of poverty and economic hardship, industry leaders must address and condemn sexual harassment and sexual violence in the trades. It is time to enact anti-sexual-violence policies, improve workplace conditions, increase pipelines for non-white and non-male candidates, change workplace culture, and listen to and center survivors.

Lia Cohen graduated from UCLA this spring with degrees in International Development Studies, Public Affairs, and Environmental Systems and Society. During her quarter studying in Washington DC with the UCLA Center for American Politics and Policy, she conducted a capstone project on the impact of sexual harassment on occupational segregation and wages for women in male-dominated, “middle-skills” jobs, particularly in the trades. As a Fall 2019 recipient of the CSW Travel Grant, she presented her research at the Women Build Nations Conference in Minneapolis. Lia is excited to deepen her advocacy outside of academia.