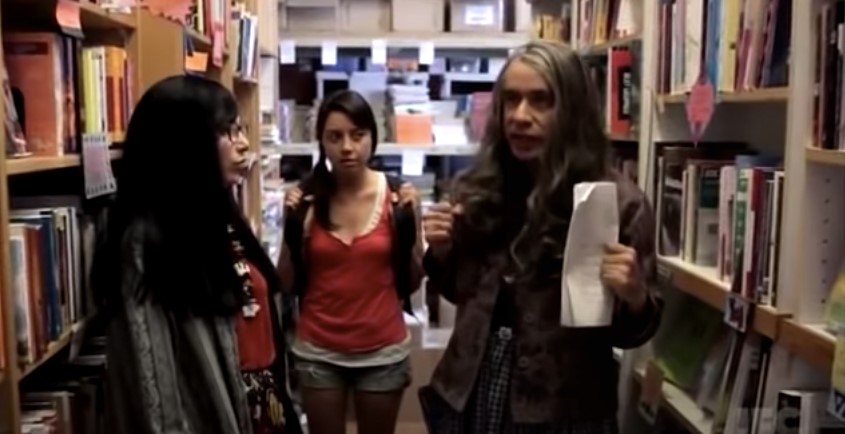 “Women & Women First” is the name of an indie, feminist bookstore in the now-ended sketch comedy show, Portlandia. Like most of the characters in the show, Toni (Carrie Brownstein) and Candace (Fred Armisen), the co-owners of the store, are so impossibly indie that they are often in modes of either decided refusal or ambivalent suspension.1 This complicates getting things done. The task of shelving a new delivery of books, for instance, comes to a halt as soon as it begins. Holding a feminist monograph, Toni turns to Candace: “That’s a top-selling author; do we want that in here?” Without a second of hesitation, Candace concludes, “No, we want bottom-selling authors.” They will not budge from their staunch indie feminism—not even to make room for a feminist comrade. But chipping at the feminist penchant for egalitarianism is not the only irony here. Rejecting the top seller also connotes the ideality that is Portlandia. The allergy towards the mainstream, which links Toni’s and Candace’s “indieness” to their queerness (yes, of course there is a queer subplot to their relationship), and which proves inoperable in the absolute is what makes the show. The Portlanders were never “transcendent subjects” beyond normativity, but their persistent efforts to elaborate on the norm with weird tweaks kept me watching.2

Stocking is not the only thing that falls through at “Women & Women First.” When a student from a nearby college (the always hilarious, Aubrey Plaza) comes in to buy Vaginas: An Owner’s Manual, and other titles for her Women’s Studies class, what should be a routine transaction also implodes. The sketch’s second impasse is also rooted in oppositional feminisms which prove incapable of working through difference. But before this friction is played out, its rationale is first iterated stylistically. You might not associate Toni and Candace to the aesthetic genre of hipsterism. They wear tent-like maxi dresses, turtle necks, boxy jackets, and the signature look—socks and sandals. But as the clever writers of Portlandia have pointed out, feminine and masculine performances of hipsterism are united under the same banner, but are not assembled from the same stuff. Their feminine versions are loosely organized around urban 1920s fashion, while their masculine iterations enjoy a longer and more spatially-expansive durée. That Toni’s and Candace’s wardrobes span the 19th century agrarian to the 1980s urban might register their rejection of these gendered asymmetries. Then again, attributing their indie fidelities to hipsterism may be a stretch; but if you have watched the show, you might see why I am scrambling here.3 Despite the flute theme that accompanies Toni and Candace’s storyline, the granola feminist taxonomy just doesn’t satisfyingly get at their style either. The reason is that the sartorial here is imbricated with a certain anachronism that underwrites it—an imaginary of the second-wave anti-sex feminist.4 When the student-shopper first approaches the store’s counter, Toni asks what happened to the rest of her frayed shorts. At another moment in the dialogue, Candace is “about to freak-out” (i.e. is “two seconds away from jumping up on [the counter] and kicking everything in sight”) when the student declines her invitation to a workshop, because it clashes with her pole-dancing class. The sketch sets up these schisms across feminisms to ultimately allow the fissures they create to rupture the scene.

By now you can imagine just how well this transaction goes. When the student identifies a title she is looking for on a high shelf, Toni asks that she refrain from pointing to it. “Every time you point, I see a penis,” she says. Candace, the taller one in the group, tries to pull the book off the shelf. She vertically extends her arm and touches the book with her fingers, but refuses to stand on her toes to gain the extra nanometer that would allow her to retrieve it. The gesture registers her “full extension,” as she puts it; a posture that uneasily conjures the fascist salute, as if to signify the extremity of her uncompromising politics. To be clear, the suggestion here is not that Candace should adjust herself to become corporally malleable in the service of her labor. Rather, it is that her assessment of what constitutes a stretch is rigid. That is to say that what gets elevated to the status of an impasse is often far from it; liberal zero-sum logics are just embedded in our thought. “I’m touching it, but it’s not enough to pull it,” Candace resigns, “it’s not within reach.” The frustrated shopper finally loses it. She reaches over Toni and Candace, angrily grabs the book, and runs out of the store with it. “We lost another one,” Toni says, as she turns to hug Candace.

We have all seen political frictions culminate in relational losses, which in social movements tend to register their dissolution. Against this type of mediation, which has its origins in liberal thought, there are queer and feminist alternatives that counsel to avow difference and move through it politically and interpersonally. The work of Audre Lorde, for one, gives us tools to hold onto differences (in both senses of the word) without folding them into a hierarchy in working towards collective flourishing.5 Loss was not the only option here, in the same way that the elimination of the bestseller was not the only way to attune to the voices of under-recognized authors. In other words, the bookstore’s alternative project runs into a standstill because its repertoire of responses to conflict is inherited from the liberal organization of sociality it is set against. As Elizabeth Povinelli points out, when irreconcilable political visions clash at the limits of ethics or morality, the liberal lexicon of recognition and equality only goes so far. At an impasse (or, at times, what is perceived as such), difference gets “bracketed,” and this often takes the form of abandonment of the minoritarian—in this diegetic, the student, who is the minoritarian of this configuration of the minoritarian.6 She was, after all, just “another one” Candace and Toni had “lost.” Of course, here, the reverse is also true: the student took off, although she resolved to do so from an unequal bargaining position.

You may be thinking, sure, by genre conventions, the sketch probes at common political dynamics by amplifying their absurdity. Fair enough. But an NPR article reveals that it is not far off from reality.7 Bill Chappell’s title, “Feminist Bookstore Slams ‘Portlandia’ And Says Show Can No Longer Film There,” nearly says it all. Long story short, the actual indie bookstore where the sketches were filmed hung a “Fuck Portlandia” sign in its window. A certain managerial iteration thought the show degraded trans femmes because Fred Armisen played Candace. Others thought drag was queer-old-fun, and that it is actually hostile to gender non-conformity to foreclose the possibility that a woman’s character could be played by a man. The store owners were of the view that the show was antithetical to its indie mission, because it had caused gentrification in Portland due to the flocks it attracted since it aired. Some community rebuttal was that the store itself is precisely part of the profitable scheme of Portland’s hipsterscape. These conversations are undoubtedly productive. It is the moment of abandonment that is worrisome. Yet,  holding on is not the same as being civil.8 “Killing joy,” after all, is what we feminists do.9 As Janaya Khan sums it, abandonment tends to add-up and become politically counterproductive, as it also reproduces dynamics of disposability.10 Abolitionist critiques tell us that such responses cannot be decoupled from logics that underlie racializing technologies such as mass incarceration. The resolve to “fuck Portlandia” is interchangeable with cutting off an organizer, academic, public figure, coworker, or a classmate.11

Yet, writing about the politics of abandonment carries the risk of unwittingly reproducing something of that very critique. If you have spent any time in social justice circles you will know that breakdowns are usually traceable to more-radical-than-thou battles. Those who are into queer theory will perhaps recognize these postures best. As Michael Warner observed, for a project that is decidedly suspicious of purity, people who work in it can register oppositions with indignation that amount to just that.12 Allow me, then, to formally implicate myself: I am yet another loser of the unwinnable social justice purity contest. I too have had my share of “fuck Portlandia” moments (not the show— the formulation), and I am sure I will have many more. But having recently reread Lorde, I try to be attuned to them, and to utilize her lessons to think about them differently.

Leor Avramovich is a PhD student in Gender Studies, and the recipient of the Irving and Jean Stone Recruitment Fellowship for the 2019-2020 academic year.