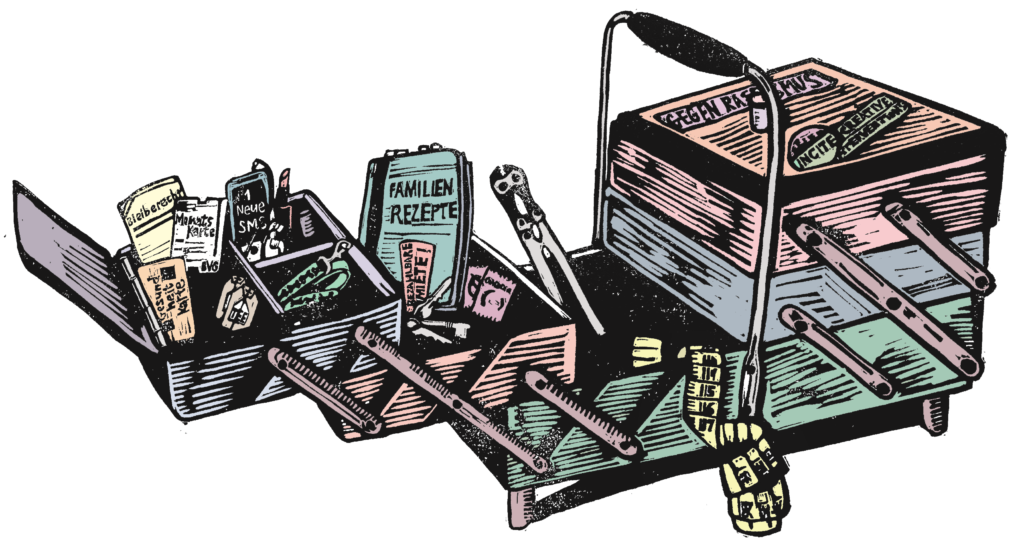 We managed to slip in the “Thinking Gender 2020” conference on transformative justice just before shelter-in-place orders came down in California. Since then, the pandemic has brought on painful new conditions for comrades and colleagues scrambling to adapt. But I have been heartened to see mutual aid take center stage. Suddenly, this form of political labor, at door stoops and on sofa cushions, was getting its limelight. Suddenly, this queer-crip-Black-and-brown-femme-trans-and-more alternative world and institution-building for purposes of surviving and thriving was no longer an add-on to the ‘real’ work (read: white, male) of changing or seizing state power. Rather, it was understood as our core purpose: to sustain ourselves and each other by any means necessary, as “revolutionary mothering” (Gumbs, Martens, and Williams 2016). This has felt like a small win in a sea of crisis, to have kitchen-table care revealed as the invisibilized bedrock of all social change work.

Transformative justice (TJ) and community accountability work is mutual aid (“Mutual Aid Justice: Beyond Survival” 2020; Bierria 2020), existing within a broader movement ecology in a complementary relationship to abolitionist campaigns to take, transform, and curb state power. But when TJ is done within social movements, it often feels like undervalued ‘service work’ to the movement: done by those deemed most disposable, on issues often deemed irrelevant, like partner and sexual violence. To see mutual aid recognized is to see these ‘essential workers’ and essential issues centered.

As a TJ practitioner, it’s disabled people, Black and brown folks, women, queers, trans people, and non-binary femmes who have taught me how to build the muscles to do this work. My research on transformative justice grew out of my own engagement as a survivor in anti-violence work. Visionary boss and mentor Maura Bairley (now of Move to End Violence) first put INCITE!’s work on my desk when I worked for her violence prevention office in college. After graduating, I moved to Berlin, Germany, which seemed like a fitting place to think about community accountability in the context of historical trauma. What I expected to be a short stint in the squats, people’s kitchens, collectives, and Freiräume (free spaces), became a decade honing skills in scaffolding utopian alternative institutions. This included cofounding the Berlin Transformative Justice Kollektiv, which translated (both literally and figuratively) U.S. critiques of and alternatives to the carceral state into the German context and hybridized them with local traditions of resistance to state and gendered violence. The collective held conversations with U.S. activists hoping the ‘mothership’ had answers—apparently an ‘urban myth’ widely shared in the early years of transformative justice activism, according to Shannon Perez-Darby, (Perez-Darby 2019).

These conversations snowballed into a Master’s research project. Studying with critical theorists in the anti-fascist Frankfurt School tradition, and inspired by Alisa Bierria’s approach to philosophy, I focused on how transformative justice and community accountability activists theorize new concepts of responsibility through their praxis. Because what I had learned burst the seams of the pages allotted for my thesis, I created a website to amplify the voices of the activists and scholars I interviewed, archive their stories, and share my findings. This was also an effort to engage in participatory and community-accountable scholarship, theorizing together with and for other TJ activists.

Part of coming into honest relationship with transformative justice was reckoning with my identity as a white person working in a genealogy rooted in Black radical, queer/trans, and women of color feminist traditions. Keeping my eyes strained across the Atlantic and oriented to the U.S. kept me from seeing my own role in my community. I offered a seminar at my university on “Feminism and the State: Carceral Feminisms and Transformative Alternatives,” and invited a number of Berlin activists to guest lecture in the course. The class was book-ended by the mass sexual violence in Cologne’s main square on New Year Eve’s of 2015 and, in summer, the passage of carceral feminist laws regarding prostitution and sexual assault. This made it clearer than ever that carceral feminist dynamics were transnational and alive and well in Germany. Together with several students, we organized a public panel with our guest lecturers. This evolved into a toolkit for analyzing state violence, its interactions with gendered violence (particularly for migrant and refugee women), and roots and seeds of TJ in the German context. These interventions were followed by additional events, articles, and books, all now housed within the “What really makes us safe?” project.

After a decade of what felt like practice runs in living “otherwise,” I wanted to root more firmly and decided to exercise a privilege most immigrants rarely have: to return home. Trump was elected a month before my move. The safety of the social welfare system in Germany was seductive, but I felt committed to going back to the place (and the systems of violence) that had made me, in order to face and fight them. Ending up in graduate school seemed counterintuitive—if I wanted to fight, why go study? But, at UC Santa Barbara I found life rafts of radical scholar-activism. I had the opportunity to join Hahrie Han’s p3 lab, which taught me to study social movement organizations meticulously from the inside out. Professor Zakiya Luna’s social movements workshop, and her expertise on methodology and Black and women of color feminism, have supported me as I leap into fieldwork. And my dissertation is overseen by Avery Gordon, longtime member of Critical Resistance, and George Lipsitz, scholar-activist extraordinaire.

The “What really makes us safe?” project continues to house my work as I expand my research for my dissertation. Shifting from philosophy to sociology, I focus more on lived praxis and the movement histories of transformative justice. I’m particularly interested in the contradictions of the carceral state when it comes to gender: how did gender-based violence come to be an alibi for the expansion of mass incarceration, even as that expansion contributes to and exacerbates gender-based violence? From a social movement research perspective, I’m curious how the feminist anti-violence movement became co-opted into a conservative, racialized law-and-order politics (Kim 2014; Richie 2012; Gottschalk 2006). I’m also looking at who resisted the co-optation by remaining anti-carceral and intersectional, as Emily Thuma documents in her book All Our Trials: Prisons, Policing, and the Feminist Fight to End Violence (2019). ) As we come upon the 20th anniversary of INCITE! and Communities Against Rape and Abuse (CARA), narrating and archiving this history is important in order to understand how transformative justice has (re)vitalized radical anti-violence practices.

Many stories of transformative justice and community accountability are unwritten, since they take place as mutual aid done in self-organized spaces or at the margins of organizations. Researchers can play a role in documenting these learnings. The mentorship of Alisa Bierra and Emily Thuma, members of CARA back in the day, has blossomed into a partnership to help build the CARA archives, where interviews for my dissertation will also serve as oral histories.

I’m also looking transnationally, to bridge my knowledge of transformative justice in different nation-state contexts. Erica Meiners and I organized a roundtable with TJ practitioners from the UK, Germany, Australia, and the U.S. Together with some of those participants, we’re working to decolonize the conversation and engage with global South practitioners of, what we call, transformative justice (and they may call something else), by organizing an event in conjunction with the AWID Forum in Taipei.

And the fight came home to me, even while studying, in that University of California graduate students started a wave of wildcat strikes over the past academic year that were in full bloom during the “Thinking Gender” conference. The support of conference organizers for the strike made it possible for me to participate without crossing the picket line. I drew on all my learnings about inside-outside strategy—building the alternative worlds/organizations/institutions we need, even as we push to change broken systems from the inside—when I seeded and launched a new project, Strike University, with a crew from across the UCs. As an effort to decolonize, democratize, queer, and abolish the university as we know it, Strike U serves as a people’s university, a think tank for the UC wildcat movement, and a training school for a new generation of university labor activists. The relationships with other social movement scholars I’d built at UC Santa Barbara allowed me to translate our alignments on theory into alignments on practice, and move into shared action. We founded the “Wildcat Organizer School” department of Strike U, where we are currently training an intercampus cohort with a 6-week curriculum on organizing skills. People talk about building where you are and going to get your cousins, but it can take a while to find where we belong, and to feel supported enough to fight for that place, and for everyone’s belonging and sustenance there.

So, it was a small miracle to get the “Thinking Gender” conference in before this pandemic turn, since the UCLA Center for the Study of Women is one of the only established academic spaces I’ve found that has built entire streams around studying and practicing abolitionist feminism and transformative justice. When my panel mate Ayanna De’Vante Spencer referred to herself clearly and proudly as a “survivor scholar,” I was moved—she had created an academic space I had never before experienced, where that was a truth we could now claim. Academics have always been “curious” about my work; it wasn’t until “Thinking Gender,” and meeting the networks of people around it, that I felt it could have an academic home, could be mothered. 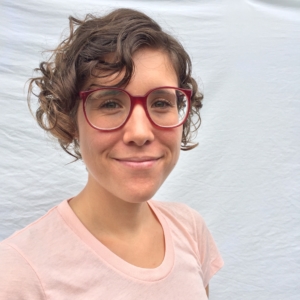 Melanie Brazzell is a transformative justice researcher and practitioner, and instigator of the “What really makes us safe?” Project. Melanie is a Ph.D. student in Sociology at University of California Santa Barbara, focusing on social movements, gender-based violence, critical criminology, and participatory research.

Gottschalk, Marie. 2006. The Prison and the Gallows: The Politics of Mass Incarceration in America. New York: Cambridge University Press.