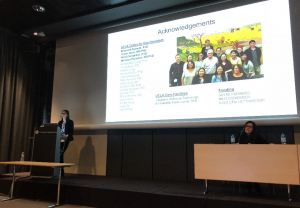 Allison Fisher presenting her work at the 66th Annual Scientific Meeting of the Society for Reproductive Investigation in Paris, France in March 2019. Photographer: Veena Sangkhae.

Iron is an essential nutrient required by all cells in the body and is particularly important during pregnancy for development of the fetus and placenta as well as maintenance of maternal health1,2. Iron deficiency is a widespread global health problem and is the most common cause of anemia in pregnant women. Severe iron deficiency and anemia during pregnancy more than doubles the risk of maternal mortality. Maternal iron deficiency and anemia is also detrimental for the baby and can cause preterm birth, low birth weight, and cognitive defects in newborns and infants3. To prevent these adverse effects, iron supplementation is nearly universally recommended to pregnant women, even without screening for preexisting iron deficiency. Yet according to the World Health Organization, most women in developed countries such as the United States are iron replete rather than iron deficient, and less than 25% of pregnant women have mild iron deficiency and anemia4. Both temporary and long-term exposure to too much iron can be toxic and cause damage to organ systems5, yet the consequences of too much iron during pregnancy remain poorly understood. In fact, scientists are only now learning that too much iron may be detrimental for fetal development and offspring cognition.

As a doctoral candidate at the UCLA Center for Iron Disorders, I developed a passion for understanding iron-related pregnancy pathology, and in particular, the long-term effects of both iron deficiency and excess iron on fetal and neonatal health. My dissertation project investigates the effect of iron supplementation during pregnancy on fetal development with a focus on pregnancies complicated by inflammation. Inflammation is a normal part of the body’s response to infection or injury. As part of the inflammatory response, immune cells secrete substances known as cytokines that communicate with other cell types to fight infection or injury. Inflammation during pregnancy can be short-term acute inflammation caused by bacterial or viral infections, or long-lasting, chronic inflammation caused by obesity. Both acute and chronic inflammation cause changes in cytokines in maternal circulation. Large epidemiological studies link maternal systemic inflammation during pregnancy to an increased risk of schizophrenia, autism, and other psychiatric disorders in their children6. Moreover, children born to obese mothers were twice as likely to develop heart disease, diabetes, cognitive and other neurodevelopmental disorders7. My work at the UCLA Center for Iron Disorders seeks to understand whether iron supplementation is even more detrimental in pregnancies already complicated by inflammation. Using animal models, we found that compared to mothers consuming a normal amount of iron, maternal exposure to iron excess and inflammation increased the incidence of brain malformations in embryos by more than 50%. These findings raise important questions about the practice of indiscriminate iron supplementation of pregnant women. Ultimately, we anticipate our research to improve women and children’s health on a global scale by increasing our understanding of pregnancy complications, providing targets for lifestyle intervention, and developing diagnostics and therapeutics.

With the support of the UCLA Center for the Study of Women Travel Award, I attended the 66th Annual Scientific Meeting of the Society for Reproductive Investigation held in Paris, France in March 2019 to present our work on the interaction between iron and inflammation during pregnancy. The mission of the Society for Reproductive Investigation is to advance reproductive and women’s healthcare through outstanding basic, translational, and clinical science and by training and mentoring future generations of investigators. This year, the theme of the conference was “From Innovation to Impact,” which highlights the Society’s dedication to not only world-class innovation in basic research and translational medicine but also to improvements in women’s and reproductive health and healthcare.

The Annual Meeting of the Society for Reproductive Investigation is the most important conference in the field of reproductive biology. Areas of focus at the meeting typically include obstetrics, perinatology, reproductive genetics, endocrinology, physiology, immunology, infectious diseases, developmental biology, oncology, and gynecology.  Conference activities include lectures on cutting-edge science and its translation into clinical medicine, career development workshops, diversity programs, and networking activities. Attending this meeting allowed me to hone my presentation skills so that I can effectively communicate my important work to the research community. This meeting also allowed me to establish collaborations and provided numerous opportunities for networking and meeting with potential future postdoctoral mentors after I finish my PhD. Overall, the Annual Meeting of the Society for Reproductive Investigation provided invaluable experience for my career development. Not only did I expand my understanding of pregnancy biology and disorders, but I established connections with the most important and influential pregnancy researchers. I thank the UCLA Center for the Study of Women for their support of my work.

Allison Fisher is a PhD candidate in Molecular, Cellular, and Integrative Physiology at UCLA. She received a CSW Travel Grant in Spring 2019 for her project “Mechanism of Adverse Interaction Between Iron and Inflammation During Pregnancy.”