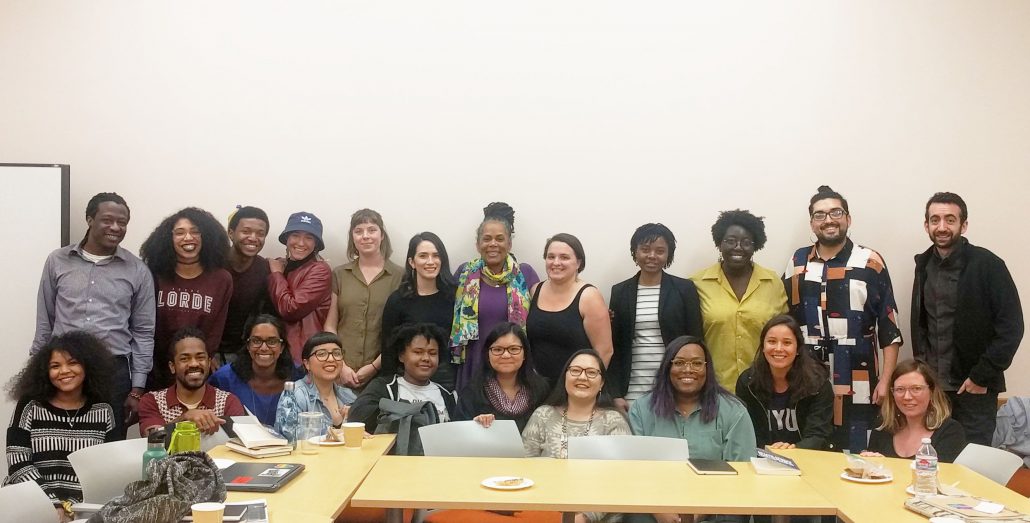 Professor Beth Richie (center, in purple) with UCLA students who took part in a pre-conference seminar in advance of Thinking Gender 2019: Feminists Confronting the Carceral State

This past February I had the opportunity to learn from Dr. Beth Richie, Professor of Criminology, Law and Justice and African American Studies at the University of Illinois at Chicago, during a seminar organized by the Center for the Study of Women as part of the Thinking Gender Conference. As a first year PhD student in Higher Education interested in studying issues of campus sexual violence from critical perspectives, I appreciated the chance to share space with and learn from such an incredible activist-scholar and other students at UCLA. Richie spoke about her book, Arrested Justice: Black Women, Violence, and America’s Prison Nation (2012), and the importance of centering Black women, state violence, and the “prison nation” in anti-sexual violence work.  Richie begins her book with a powerful statement about the connection between sexual violence and state violence, stating that survivors of violence are “degraded by individuals as well as by state-operated systems of domination” (p. 2). These “state-operated systems of domination” are tied to the “prison nation,” which she defines as “dimensions of civil society that use the power of law, public policy, and institutional practices in strategic ways to advance hegemonic values and to overpower efforts by individuals and groups that challenge the status quo” (p. 3). These systems of domination manifest in structures of policing, imprisonment, and surveillance supported by the government. In the seminar, Richie spoke about elements of the literal and symbolic “prison nation”, including schools that feel like prisons, gender policing, immigration policies, loitering laws, and privatization of surveillance.

In reflecting on the seminar and the elements of the “prison nation,” I continued to ponder the connections between the “prison nation” and higher education. I then came across an article written by Stewart and Nicolazzo (2018) titled the High Impact of [Whiteness] on Trans* Students in Postsecondary Education. In their article, Stewart and Nicolazzo describe a partnership with the Arizona State University (ASU) School of Social Work and the Phoenix Police Department that bolsters the carceral state. They draw a link from carcerality to higher education as they discuss how higher education has colluded with carceral systems explicitly through collaborations such as the ASU and police partnership and implicitly through policies and practices (Stewart & Nicolazzo, 2018).

This link between carceral systems and the “prison nation” can also be seen in higher education’s response to campus sexual violence. In much of the literature on campus sexual violence there is a lack of connection drawn between other forms of oppression and sexism and sexual violence (Harris & Linder, 2017), including a connection to state violence. However, activist-scholars such as those who formed the Combahee River Collective (1986) and Kimberlé Crenshaw (1989, 1991) have demonstrated how the experiences of women of color are distinct from those of white women or men of color because of their intersecting experiences of racism and sexism. Crenshaw (1991) outlines the importance of considering the intersections of multiple forms of oppression, including white supremacy and patriarchy, in sexual violence research and practice. Much of higher education’s response to campus sexual violence has lacked an intersectional approach that would serve the needs of marginalized survivors (Harris & Linder, 2017). Additionally, many mainstream anti-violence movements, which supported advocacy work on college campuses, have relied on an approach to addressing and preventing violence that is focused on criminalization, as Mimi Kim (2015) illustrates in her article Dancing the Carceral Creep: The Anti-Domestic Violence Movement and the Paradoxical Pursuit of Criminalization, 1973 – 1986. Furthermore, there is an overreliance on compliance and Title IX in higher education (Weiss & Lasky, 2017) and existing response protocols and policies heavily involve police and formal reporting structures that may exclude minoritized survivors. For example, women of color students may be hesitant to report their assaults to Title IX offices or campus police departments because of socio-historical understandings of legal, medical, and social service systems (Brubaker & Mancini, 2017; Tillman, Bryant-Davis, Smith, & Marks, 2010).

I’ll end with one of Richie’s final statements of wisdom, which I wrote verbatim in my notes: “don’t feed the punishment industry.” There are policies and practices within higher education that support criminalization and punishment, which are directly linked to the “prison nation.” As a former university prevention educator, I recognize the struggle that many advocates and educators face because of the often single-minded focus on compliance and legal restrictions their institutions hold. However, as Richie encouraged the students in the room to do so, we – activist-scholars, advocates, policy-makers, researchers, practitioners, and students – must continue to imagine and work toward transformative change, justice, and healing that will truly serve all survivors.

Nadeeka Karunaratne is a PhD Student in Higher Education and Organization Change at UCLA who took part in a pre-conference seminar with Professor Beth Richie as part of Thinking Gender 2019: Feminists Confronting the Carceral State.