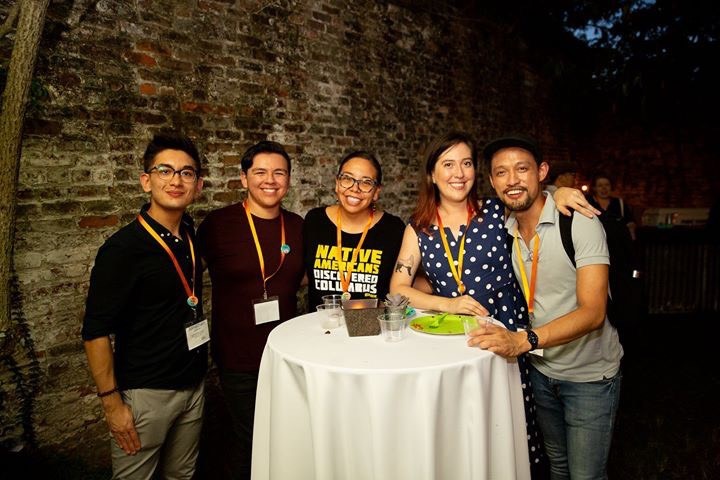 In 2018, the number of American Indian women producing, writing, and directing for the stage was at an all time high in contemporary American theatre. Playwrights like Larissa Fasthorse, DeLanna Studi, and Mary Kathryn Nagle have had shows produced in venues like the Oregon Shakespeare Festival and the Public Theatre in New York. According to Women Arts, women make up about a quarter of the playwrights whose work is produced across professional theatre companies, and less than half of shows produced are directed by women are. For Native women, the numbers are even lower. The need for equity in theatre is high and the space for professional opportunity is slowly growing.

With the support of the UCLA Center for the Study of Women, I recently attended the annual diversity facilitator training hosted by ArtEquity at the Ashé Cultural Arts Center in New Orleans, Louisiana. ArtEquity is an organization with the mission of creating and sustaining a culture of equity and inclusion through arts and culture. Currently, the training is geared towards offering theatre professionals the opportunity to gain the practical and analytical skills necessary to addressing issues with identity, privilege, and structural power, and to create ally-building and best practices for change at the interpersonal, group, and organizational level. The training consisted of two weekend-long intensive sessions in the fall of 2018 and happens annually.

The training aligns with my research and pedagogy in several ways. As an emerging Lakota artist and scholar I am developing methodologies grounded in Lakota ontology that engage with art and culture, and address performances in contemporary theaters, galleries, and on digital platforms. My broad research looks at the impact of Lakota culture on the performance of pan-Indian identity in an urban context; more specifically, I am looking at the intersection of gender, performance, and Lakota ontology. As I engage with performance in a literal sense (at museums, theatres, etc.), it is important to understand what the current landscape of performance space entails. The ArtEquity training allowed me to engage with some of the top theatre/art professionals in the country who are developing relevant rhetoric and methodologies for addressing diversity and inclusion on a multitude of institutional levels.

The two weekend intensives provided me with a firm grounding in language and action regarding diversity, equity, and inclusion. Not only was I exposed to a multi-generational, multi-communal, and multi-level professional cohort but the training occurred in New Orleans. As an indigenous scholar, it was important to understand my positionality in a diverse city like New Orleans. Bulbancha, the place of many voices, is a name indigenous communities in the south call the city. Experiencing an emotionally draining, eye opening, and foundational training like that offered by ArtEquity was complemented by the history of Bulbancha.

Through the training I was introduced to a cohort of 33 individuals who represented at least 30 organizations across North America. We also had the opportunity to engage with ethnic/cultural/racial affinity groups. Within the indigenous group I was able to meet playwrights, performers, directors, and theatre practitioners who represented diverse tribal communities as well as multi-generational professional levels. The mentorship provided by ArtEquity ensures that we have a wide network of trainers that we can rely on to unpack conversations of practice, equity, and white supremacy.

As an artist and scholar I aim to engage with professional art spaces and academic spaces on varying levels. Understanding methodological approaches to facilitating art space through a lens of Lakota ontological perspectives challenges me to understand and engage with practitioners, theorists, and community from a position of empathy and scholarship. Recently, I co-curated an exhibition titled Responsibilities and Obligations: Understanding Mitákuye Oyásʼiŋ with two other female-identifying Lakota artists; Mary Bordeaux and Layli Long Soldier. Our project aims to engage Lakota community, artists, scholars and general audiences to reflect on the (mis)appropriation of a Lakota phrase.

The exhibition is a reflective journey highlighting Lakota female perspectives surrounding the idea of Mitákuye Oyásʼiŋ and the implications of this phrase. Mitákuye Oyásʼiŋ is a phrase from the Lakota culture that loosely translates to “we are all related” or “all my relatives.” The phrase, used commonly by Lakota and non-Lakota alike, has been appropriated as an all-encompassing idea of inclusiveness. The phrase is used typically in Lakota ceremonial or ritual spaces as well as in community social spaces to begin or end cultural events.

As a collaborative and cognitive creation, the exhibition tackles issues of socio-cultural identities and while unpacking the complexities of contradicting cultures through multiple art forms including performance; the exhibit established the ways to engage in a diverse and multifaceted community. The Lakota methodology we are developing for the community engagement aspect for the project can be applied to broader community-based research projects. The exhibition is one example of how my research and pedagogical aspirations align with the training goals of ArtEquity. The intersections of my research and pedagogy demonstrates how to critically address equity through stories, representational models, scholarship, and community from a Lakota perspective.

I am thankful and privileged to attend a university that offers financial support for training and methodological development that operates outside Euro-American western epistemologies and frameworks.

Clementine Bordeaux is a graduate student in World Arts and Cultures/Dance department at UCLA. In 2018 she received a travel grant from the Center for the Study of Women.