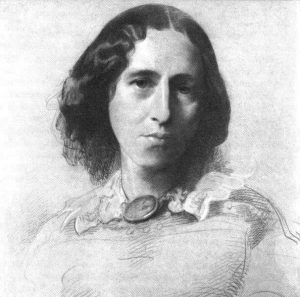 Novelist George Eliot is arguably the single most paradoxical and polemical female figure of the nineteenth century. “Why,” in essence, as Kate Flint summarizes, “should a woman who herself possessed extraordinary intellectual powers, who had a remarkably broad grasp of historical, philosophical, scientific, and literary issues, and whose relationship with George Lewes transgressed Victorian convention, be so apparently conventional in many of her views?” On the one hand Eliot dismissed women’s popular fiction as ultra-saccharine “Silly novels by Lady Novelists”; on the other, she was arguably the most successful woman novelist of the Victorian age, despite–or perhaps because of–her highly publicized transgressions of female gender norms.

At the inaugural Nineteenth Century Study Week, hosted by the Institute of English Studies at the University of London, I participated in a small week-long intensive seminar that explored Eliot’s life and work in the context of these and other questions. Led by a group of advanced women scholars in the field of Victorian literature including Isobel Armstrong, Laurel Brake, Hilary Fraser, Rosemary Ashton, and Ruth Abbott, we analyzed Eliot’s major novels–Middlemarch, Adam Bede, Daniel Deronda, Romola–and lesser known periodical writings from The Leader and The Westminster Review.

The seminar provided a unique opportunity to examine Eliot’s writing in situ: held in Bloomsbury, a literary hotspot in nineteenth-century London, the week included trips to the nearby British Library and to fellow Victorian writer Thomas Carlyle’s home in Chelsea. One of the highlights at the British Library was a special workshop with a curator, where the group engaged with rare periodical prints of The Westminster Review (a journal Eliot edited), and copies of Eliot’s novels in their original serialized format. I had the opportunity to conduct research using some of the materials from that workshop, along with a manuscript copy of Eliot’s novel Daniel Deronda, for several days after the seminar week.

Ultimately, participating in the Eliot Study Week gave me the opportunity to fully immerse myself in the work of perhaps the most powerful yet enigmatic writer of the Victorian world. Reading Eliot in the context of her biographical struggle to gain acceptance as an unmarried woman in the literary publishing world provides deeper insight into issues of gender, power, and urban social life in the nineteenth century.

Jessica Cook is a PhD Student in the UCLA Department of English. She received a CSW Travel Grant in 2017-2018.