Thinking Gender 2019: Feminists Confronting the Carceral state is an event meant to center the scholarship of Black and Brown, queer, trans, and gender-non-conforming peoples creatively considering the gendered violence of our carceral world, past and present. The keynote panel is meant to demonstrate the capaciousness of the study and action of prison abolition. The space is an academic one, but not limited to scholarly interventions, as the central tenants of an abolitionist approach are: to keep the human dimension of incarceration in clear view; to question the naturalness of prisons as a necessary and rational solution to harm; and to recognize that the prison is not an isolated institution. Thus, those invited to speak on the keynote panel represent a distinct group of scholars and community organizers who seek to approach abolition through the centralization of humanity, dignity, and community. The prison industrial complex touches all facets of life, and, often, death on this planet so naturally discussions of its eradication must operate widely and intentionally. Our keynote panel will demonstrate a variety of necessary approaches and orientations to the carceral state and gendered carceral violence. 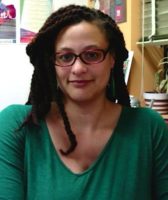 Alisa Bierria is currently an Assistant Professor of Ethnic Studies at the University of California, Riverside. Her current work is primarily concerned with black women’s practices of agency and action in contexts of anti-black racism, carceral regimes, and gender-based violence. Professor Bierria’s training as a philosopher informs her contributions to theoretical figurations of the human, and human agency navigating structures of power. Her other research interests include feminist/queer carceral studies, black feminist theory and method, critical bioethics, and popular culture.

Professor Bierria’s work is in no way disconnected from her political organizing. She, like Lenz, is a co-founder of Survived and Punished, a national coalition that includes survivors, organizers, victim advocates, legal advocates and attorneys, policy experts, scholars, and currently and formerly incarcerated people. She is also a member of Communities Against Rape and Abuse (CARA), and has co-published an invaluable essay entitled “Taking Risks: Implementing Grassroots Community Accountability Strategies.” You can read the text in full here. While at UC Berkeley, Professor Bierria founded the Feminist Anti-Carceral Policy and Research Initiative.

Her commitment to currently and formerly incarcerated peoples is demonstrated by her advocacy and organizing, and her public voice as a prolific writer and editor.

She has published in Hypatia: A Journal of Feminist Philosophy; Journal of Popular Music Studies; Shout Out: Women of Color Respond to Violence; What Lies Beneath: Katrina, Race, and the State of the Nation; The Revolution Will Not Be Funded: Beyond The Non-Profit Industrial Complex; Color of Violence: The INCITE! Anthology; In These Times; The Feminist Wire; and Scholar & Feminist Online. Professor Bierria was interviewed by Katie McDonough in Jezebel about repair; specifically, models of repair for victims of sexual and domestic violence. She says,

“Sometimes removing people from that context is interpreted as punitive; I’ve seen people call it “disposing” of a person. It’s not about disposing, and I don’t even think it’s necessarily about punishment. It’s about consequences. It’s about the fact that you’ve misused your power, and now you are not going to be trusted anymore… There have to be consequences for, first and foremost, safety, but also if there is going to be any transformation or repair it can’t just be business as usual.”