Join us at Thinking Gender 2019: Feminists Confronting the Carceral State on Friday, February 22 at the UCLA Luskin Conference Center!  Beth Richie will speak on the Keynote Panel, Abolitionist Feminist Futures, alongside other distinguished scholar-activists.

Conference information is available at http://csw.ucla.edu/tg19.

I first read Professor Beth Richie’s work in a course titled “Imprisonment and the Prisoner” taught by Professor Carlos Alamo at Vassar College. This class, like Richie’s literature, situated carcerality in a matrix of harm that historically and presently targets poor, Black, Indigenous, and brown peoples. Most significant, however, is Richie’s attentiveness to Black women and Black gender non-conforming peoples, and the unique relationships between gender, sexuality, law, and violence. Richie’s commitment to Black Feminist Theory grounds her work in a deep set of values and community, ultimately prioritizing the safety, healing, and health of those most vulnerable to institutional and interpersonal violence. 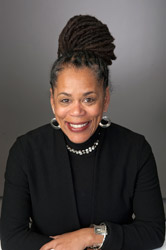 An activist, mentor, and prolific scholar, Richie’s argument that violence against Black women is epistemological is a significant intervention, as it asserts that anti-violence abolitionist advocacy and scholarship cannot be an apolitical project. Black Feminist Theory, which is the nucleus of Richie’s scholarship, is equal parts political and communal. The liberation and survival of Black peoples and Black women remains Richie’s primary concern, and her work on their unique experiences of the law and incarceration is invaluable and radical.

Richie is the author of Arrested Justice: Black Women, Violence and America’s Prison Nation (NYU Press, 2012), which chronicles the evolution of the contemporary anti-violence movement during the time of mass incarceration in the United States, and numerous articles concerning Black feminism and gender violence, race and criminal justice policy, and the social dynamics around issues of sexuality, prison abolition,  and grassroots organizations in African American Communities. Her earlier book Compelled to Crime: the Gender Entrapment of Black Battered Women (Routledge, 1996), is a seminal text for academic, policy, and organizing literature on race, gender, and crime. In addition to her qualitative research, Richie is also working on an ethnographic project documenting the conditions of confinement in women’s prisons.

In addition to her scholarship, Professor Richie is a founding member of INCITE!: Women of Color Against Violence. INCITE! is a fundamentally intersectional organization that combats the de-politicization and corporatization of anti-sexual/domestic violence movements. The organization is specifically a space that prioritizes the inclusion and safety of Black and Brown women, trans people, and gender non-conforming peoples. The radical network recognizes violence against Black and Brown women, trans people, and gender non-conforming people as structural, historical, and political with attentiveness to immigrant detention, Indigenous land dispossession, and neo-colonialism as central tenants of the prison industrial complex that often go overlooked. At the heart of the organization’s call to action is community empowerment and grassroots organizing. INCITE!’s Principles of Unity can be found here. Richie is a dynamic, honest, and creative scholar, activist, and advocate. She forces us to consider what liberation can look like when the freedom and empowerment of the most vulnerable are thrust into the center of radical organizing. She affirms the self-determination and power of our communities to understand and articulate our needs. She holds those invested in harm accountable. We anticipate that, with her contributions, the keynote panel will be particularly generative and engaging.