“Three things happen when women are in the lab: you fall in love with them, they fall in love with you, or they cry.” These widely publicized words from esteemed biochemist Tim Hunt reveal the unfortunate reality that women still struggle to be taken seriously in science, technology, engineering and math (STEM) careers because of their gender.

I have personally experienced gender-related stereotypes at multiple points in my scientific research career. The first occurred when I began my undergraduate degree in psychological science. I nearly sprinted to the Honors College to pick up my class schedule. I approached the gentleman seated at the registration booth and let him know I was there to check in. He gave me a puzzled look and said, “I’m sorry, this is registration for life science majors at the Honors College.” Confused by his response, I looked around the room occupied primarily by men. No one appeared to question their chosen major or competence. Yet, at a glance, this person decided that I didn’t belong in science.

The second time someone pre-judged my science competency through the lens of my gender was just as I was beginning my graduate degree. At my field’s annual conference, a senior professor asked me, “Who are you married to here?” When I responded that I was not married to a scientist but was instead a scientist in training myself, he expressed his surprise, indicating he had always thought of female scientists as “poorly dressed, unattractive women, with little to no social skills.” This person possessed no knowledge of my intellectual merit or skills; his comments were rooted in aesthetic judgments based on little more than my gendered appearance.

Why did these individuals think I didn’t fit into a scientific career? What specific cues informed their judgments, and how might greater knowledge of those cues help other women to avoid similar experiences? My research seeks to address these questions by examining how visibly gendered cues impact consequential evaluative judgments of women, particularly in male dominated career environments. 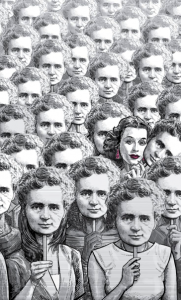 In one line of research, my collaborators and I test the role that women’s facial femininity plays in the extent to which others associate them with STEM career fields. We find that, while women are less associated with STEM fields overall, observers are less likely to associate facially feminine women with the career category of software engineer and the domain of science more broadly. In a second line of inquiry, we probe individuals’ visual representations of university scientists vs. university teachers and software engineers vs. administrative assistants—asking, essentially what they think the people holding these positions must look like. Individuals’ representations of university scientists and software engineers are male and masculine, while their representations of university teachers and administrative assistants are female and feminine. Taken together, these studies show that women suffer from a decreased association with STEM from a mere cursory glance. Indeed, they do not fit with men nor women’s visual images of career fields in the STEM domain. These findings suggest that we need to think about increasing diversity not only across categories but also within categories. Meaning, it is not enough to merely include more women in depictions of STEM, but we need to include a variety of different-looking and diverse women to appeal to young women who encounter them in media, textbooks, and academic settings.

More recently, we have begun research to extend our understanding of judgments of individual women to perceptions of women in groups. That is, does brief exposure to a group consisting of mostly men or mostly women influence how women within that group are perceived? Initial evidence indicates that exposure to majority women groups leads individuals to see these women as looking more like the group rather than standing out as individuals. Thus, increasing female representation may enhance women’s perceived fit and belonging in the STEM domain. Understanding how group composition impacts perceptions of women within that group reveals the early impact of female underrepresentation. Furthermore, these results provide an initial foundation that can inform efforts to increase diversity in the workplace.

It is imperative that we achieve a more balanced representation of women in STEM. Careers in STEM fields afford women with opportunities for equitable salaries (women employed in STEM fields earn 33% more money relative to women in non-STEM fields), enhance social mobility, and afford greater professional respect among their colleagues.1 Furthermore, gender equality in STEM will bring diverse perspectives to STEM challenges,1 benefitting society broadly. Although the representation of women in STEM is increasing, STEM environments remain hostile for women. Women who exhibit cues of femininity might be particularly at risk for such hostility and may even be viewed as less competent in their chosen field. My work demonstrates that interventions to ensure greater participation of women in STEM need to attend not only to women, but also to people evaluating and perceiving these women.

Furthermore, this work highlights a path towards greater inclusion for women, not just in scientific domains, but career paths more broadly. By understanding the role of visual cues in the workplace, we can establish a more hospitable career environment in which individuals do not have to grapple with their identity to be considered competent. This line of work also highlights fruitful opportunities for future research pertaining to equal rights for women. For example, if something as simple as facial visual cues can shift perceptions of women in STEM, perhaps other related nonverbal cues like body movement can elicit similar results. In line with feminist goals of gender equality, this line of research will inform a much-needed restructuring of the current state of career fields to be more inclusive of women, regardless of their appearance. In response to Dr. Hunt, I say that the only problem with women in science is that there aren’t more of us.

Jessica Shropshire is a PhD student in Social Psychology. In 2017-2018, she received a travel grant from the UCLA Center for the Study of Women.