Above: Brandenburger Tor, a border crossing in Berlin that was closed until the fall of the Berlin Wall.

In September 2015 a shocking photograph showing a 3-year-old boy lying face down in the sand on a Turkish beach went around the world. Alan Kurdi had drowned when a boat carrying him, his family, and several others, sank. Alan’s mother and 5-year-old brother also perished and only his father survived. The family had been denied asylum in Canada and like hundreds of thousands of others they had been trying to reach Europe by crossing the Mediterranean Sea. Ultimately the father received money to travel back to Kobani, Syria, to bury his family.

Soon after, and in the midst of the largest displacement of people since WWII, German Chancellor Angela Merkel proclaimed in a press conference that: “We can manage this, we can do it…If we start having to apologize for showing a friendly face in an emergency situation, then this is not my country.”1 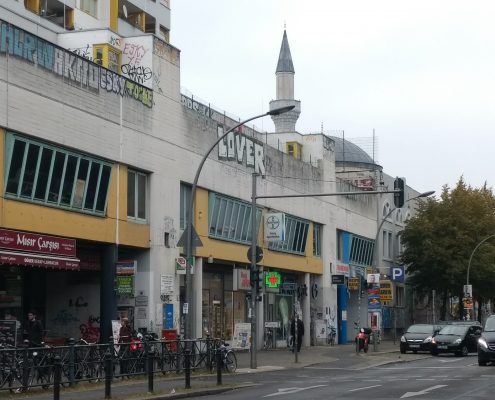 A Turkish masjid (mosque) in Kreuzberg in Berlin, where many Syrians now also reside.

In sharp contrast to other European countries, such as the United Kingdom, and the United States, Merkel’s Germany decided to not close their borders to refugees at various points throughout 2015. As a result, approximately one million refugees arrived in Germany by the end of that year.2 By 2016, 250,000 migrants had arrived in Germany from Syria, and 97,000 of these Syrians had relocated to Berlin.

Thousands of miles away, I was living and working in New York City and I became glued to reading any stories that I could find about migrants attempting to relocate to Europe. Three years ago in 2015, almost all major news outlets around the world had sent their foreign correspondents to report on refugees fleeing Syria, Iraq, and other countries, and of their traumatic journeys to reach countries like Germany and Sweden.

I paid close attention to these reports – reports that soon dwindled – and realized that I as a writer-director, wanted to do something as well. Having been a migrant myself multiple times over throughout my life, I started to envision making a trilogy of films that portray migrant stories. Migration, whether it is forced or voluntary, is a near-universal experience that is extremely disruptive to one’s life. The migrations that I have personally experienced have deeply impacted my views, my personality, and now, my work.

After two years of research from afar, I made my initial trip to Berlin in September 2017 to begin on-the-ground research for my script, Kreuzberg, which focuses on a fictional Syrian woman and her daughter who have ended up in Berlin. The story is set in this vibrant city with its raw and disturbing history, against the backdrop of Germany welcoming in asylum-seekers. I wrote Kreuzberg as a fictional film, as I believe that much truth can be found in fiction, and I decided to focus on a woman, as the narratives of Syrian women who have migrated to Europe are largely absent from media accounts.

I understood that in order to craft as nuanced a story as possible, I needed to meet Syrians who had ended up in Berlin. And so, during my ten days in the city, I met with a dozen Syrian migrants. Almost all of them had arrived in 2015 during Europe’s so-called “migrant crisis,” and all of them had undertaken extremely dangerous journeys, arriving in Europe by boat. I absorbed and listened to the stories these individuals shared with me. I met them in their homes, neighbourhoods, and at community gatherings. Kreuzberg is a neighbourhood in which many Syrian migrants reside, and hence where I found myself spending a lot of time. 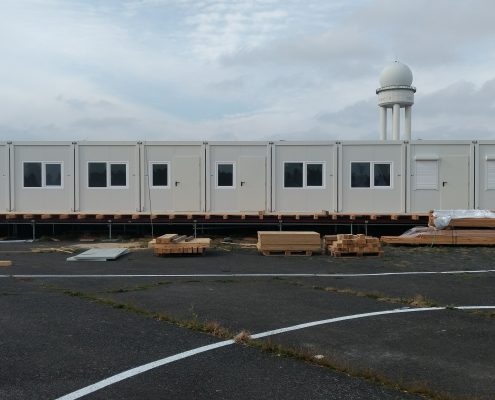 Templehof, a disused airport in Berlin that was once used by the Nazis, that became an emergency refugee shelter in 2015.

Many confidentially told me of harrowing and xenophobic experiences that they had to endure since arriving to Germany. My trip happened to coincide with the last German federal election, which saw Merkel retaining her chancellorship, but which also saw the rise of AfD, Alternative for Deutschland, a nationalist far right party that demonizes migrant communities.3 What we see now in Germany mirrors what we see elsewhere in Europe as well as in the United States, with conservative groups othering im/migrants in order to successfully rally nationalist bases.

We should keep in mind however, why such large numbers of people are seeking asylum and refuge all across the world, from Central Americans arriving at the U.S.-Mexico border, to the Rohingya who have trekked to Bangladesh, to the millions who fled Syria for Turkey, Lebanon, and Europe.

The individuals who shared their time with me told me of how they left for safety and to provide for their family, as Syria’s economy had collapsed when war erupted in 2011. Most of the Syrian migrants who came, and thus most of whom I met with, were young men. Their age and gender makes them a target for the xenophobic far right in Europe. But these men had to leave their homes, to avoid being forced to join and fight for (and kill for) the Syrian army, or for one of the many militant factions who were fighting the Syrian regime and each other. Rather than picking up a gun and following disturbing orders, they chose the harrowing path to escape. Reaching Germany after a treacherous journey by sea and crossing numerous unwelcoming lands, these individuals had to start their lives over. They receive stipends from the German government as they take language lessons, study, or look for work, as well as find ways to deal with their immense and numerous traumas.

Sadly, the climate in Germany is no longer welcoming towards those seeking a safe haven. I will continue to craft and work on Kreuzberg, so that there can be a film that conveys who these migrants are, why they’re migrating, and why they shouldn’t be forgotten. In the meantime though, just recently the United States Supreme Court enshrined bigotry into law by upholding Trump’s travel ban, which is, essentially, his attempt at an Islamophobic Muslim ban, that prevents migrants from Iran, Libya, Syria, Somalia and Yemen, from ever coming to the United States.4

It is certainly dismaying to see more and more Western governments attempting to box themselves in, rather than assisting those who are most vulnerable. As London poet Warsan Shire expressed in her poem “Home”: “no one leaves home unless home is the mouth of a shark.”

Hena Ashraf is pursuing an MFA in Film Directing at UCLA’s School of Theatre, Film and Television. Hena’s current films focus on the largely untold intersectional experiences of queer Muslims, and on migration stories. She received a travel grant from CSW in Fall 2017.