By Sarah Tracy and Rachel Vaughn 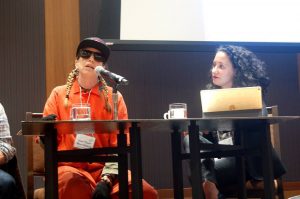 “I want to remind y’all you’re in mixed company tonight,” Tiny (aka Lisa Gray-Garcia) declared to a full house of 142 students, faculty, activists, and community members at one point during the Edible Feminisms: On Food, Waste and Metabolism  public panel, held February 1, 2018 at the Luskin Conference Center, UCLA campus. “We’re not all academics here; just say what you mean.”

We conceived Edible Feminisms (EF) to showcase feminist scholarship at the intersection of food studies, science studies, and food science. Funded by the Luskin Endowment for Thought Leadership, Edible Feminisms included the February 1 panel, followed by a full-day writing workshop on February 2 for contributors to a forthcoming special issue of the international, multi-disciplinary journal Food, Culture & Society (August 2019). Edible Feminisms was intended to realize award-winning scholar Kyla Wazana Tompkins’ call for “Critical Eating Studies”—for food scholars to “look beyond food itself” and reflect on how our ideas about ingestion and edibility reveal “the political beliefs and structures” that organize us materially, as individuals and communities (2012). Edible Feminisms is a celebration of intersectional feminist activism and scholarship; however, Tiny’s words stand as a reminder of the gulf between theory and praxis. How could our theoretical intervention be relevant to community activists? Better still, how could our theoretical language come not only out of the science (Roosth and Schrader, 2012), but out of the street? 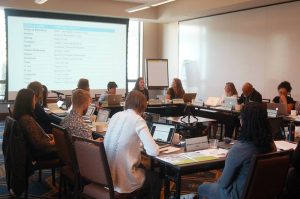 How does a feminist eat? What does feminism have to do with waste? Or with metabolic health? These were some of the questions confronted by activists and scholars at Edible Feminisms. In our contemporary moment, women, especially women of color, globally produce well over half the world’s food, yet face sharp hunger trends and gender-based barriers to resources like land, tools, and financing. As we write, thousands of assault and harassment cases filed by migrant and undocumented farmworker women await legal action—at the height of the #MeToo movement and in spite of their crucial skills sustaining US agriculture. Since October, the Coalition of Immokalee Workers has run a #TimesUpWendy’s campaign calling out the fast food giant for failing to join the Fair Food Program that works for harvests without violence for farmworkers. In spite of cultural traditions and stereotypes that result in unpaid food work often falling to women—and, more importantly, despite the fact that that food work is often inspired by women’s immense culinary contributions—in the US women formally head <20% of restaurant kitchens, with the number dropping to <5% among elite restaurant groups. At the highest levels of the culinary world, strides have been made toward equitable acknowledgment of the work long accomplished by women and minorities; still, 80% of James Beard Award nominees are white, 75% are male, and only 10-25% are women or people of color. In contrast, 14% of the US population is food insecure and single parent homes, especially those headed by women of color, experience the highest rates of food insecurity. These data are also conservative, not reflecting increasing rates of homelessness, especially among LGBTQ youth; or, that in years of data, only two key studies, released by the Williams Institute at the UCLA School of Law, expressly look at how discrimination on the basis of sexuality or gender identity significantly impacts food security.

Data like these have driven us to articulate the indigestibility of patriarchy. Edible Feminisms uses food to show how—through expert, technical, and regulatory practices—capital markets put a value on our skills and our talents, as well as on what can be generated from animals, plants, and microbes. Generations of science and gender studies scholarship have brought us to this place, where attending to the discarded, wasted, the presumed dead, done, inedible, and filthy can be seen as a fundamentally feminist project.  Foregrounding the work of how things, phenomena, and people are side-lined, erased from view, or de-valued, enables active debate about what modes of collective life are worth living. Food studies has likewise established that the edible can act as a vehicle for both injustice and justice (Belasco 1989, Williams-Forson 2006, Guthman 2011), granting us purchase on tough, often uncomfortable questions about the persistence of hunger and the privilege of haute cuisine. And it is through attention to the eating and the digesting and the defecating and the rotting that Edible Feminisms foregrounds patterns in how neoliberal market relations and subjectivities write-off matter and communities in its assessments of value. 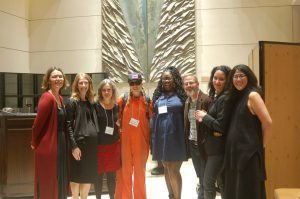 The other goal of Edible Feminisms is to promote work that shows other models for nourishing our bodies and communities; ideas that create value for people beyond dollars and cents, or profit margins. Panelists included Tanya Fields, founder of the BLK ProjeK, a community organizer, public speaker, and popular social media personality fostering leadership and health among black women in the Bronx; Tiny (aka Lisa Gray-Garcia), co-founder of POOR Magazine/Prensa POBRE/Poor News Network and The Homefulness Project, a landless peoples’ self-determined land liberation movement and a prolific writer and editor; Rick Nahmias, founder of Food Forward, redistributing ‘waste’ produce across LA; and literary critic and scholar Kyla Wazana Tompkins of Pomona College, who, with razor-fine criticism, irreverence, and humor, has challenged food and American Studies scholars to keep the acrid bite of racism, sexism, and homophobia/transphobia on our tongues as we craft our stories about what America is—and what it could be. Moderating was MIT anthropologist Heather Paxson, who has been influential in bridging the groups of scholars who study science and food. 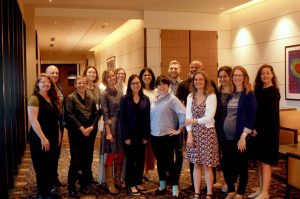 Edible Feminisms does its part to cross-pollinate the fields of study from which scholars consider food, pulling in particular on Discard Studies and Gender Studies. The Edible Feminisms special issue, forthcoming in August 2019, explores (re)valuations of edibility from the internal to the external, from the intersectional politics of representation in film and in metabolic disease, and from food safety border control to industrial fermentation practices to DIY placenta dehydration.  On February 2, 2018, more than a dozen scholars workshopped written contributions on such topics, in collaboration with local experts in waste management, metabolic disease, and psychedelic therapies for depression and anxiety at end-of-life. Our hope is that the mutual support and enthusiasm of contributors echoes the feminist and decolonial ethic their essays argue for with a turn to critical eating studies, modeling a catharsis and an intervention to address the harms of market mechanisms that govern both our bodily and professional practices.