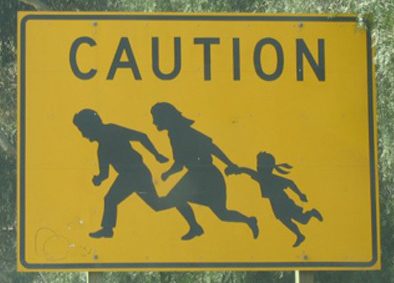 Resisting the Violence of Ideology

A woman gets pregnant. She’s nine months, she walks across the border, she has the baby in the United States, and we take care of the baby for 85 years? I don’t think so.

On September 16, 2015 during the Republican primary debate that aired across the U.S. and around the world, then-presidential candidate Donald Trump bemoaned the United States’ constitutional law that grants citizenship by birthright. While this comment reflects a longstanding interest in Latinx reproduction among politicians and comes as no surprise to followers of the 2016 presidential election, it bears special significance in highlighting the extent to which a controlling images framework (Collins 1990) is useful for understanding perceptions of and inequalities experienced by Latinx. 1

The discursive power embedded in this passage is two-fold. First, Trump does not mention a specific ethnoracial group nor does he clarify whether he refers to the U.S.-Mexico or U.S.-Canada borders, but his listeners will be able to picture the woman he has in mind. The fact that specification is absent (and unnecessary) showcases the extent to which the image of the pregnant woman walking across the border to birth is a symbol for a poor, presumably undocumented, Spanish-speaking, Mexican-origin woman, given high rates of Mexican immigration and Mexico’s proximity to the U.S. Second, this image brings to light the all-encompassing quality of controlling images. In this discursive moment, this anonymous woman—poor, undocumented, Spanish-speaking, opportunistic, fertile, straight, Mexican immigrant woman—becomes the ideological reference point for all Latinas: the hyper-breeding welferera.2 Her fertility and thus her progeny are threats to the political, moral, and economic fabric of the U.S. through fears of overreliance on public assistance, crime, reduction of job availability, and overpopulation. That racialized, gendered, and classed undertones fuel these fears is all the more evident given the fact that undocumented immigrants are ineligible for and cannot access the very federal public assistance services that they purportedly exploit. The stereotypical and controlling image of the hyper-fertile welferera with few skills and little respect for immigration laws has long captured the U.S. national imaginary via immigration policy (Huang 2008), fictional and news media representations (Gutiérrez 2008), and academic research. The pervasiveness of these representations speaks to the power of discourse in structuring what we can and cannot think about certain phenomena (Foucault 1966). In this way, it carries a cumulative effect: over time this image overpowers other images and guides how others view Latinx, and to varying degrees, how Latinx view themselves.

While scholars have examined how controlling images of women of color function as mechanisms for social control by distorting holistic perceptions of marginalized communities (Collins 1990; Dow 2016; Espiritu 1997; Kelly 2010; Uchida 1998; Wingfield 2007), and how Black women resist the discursive violence wrought by such images (Collins 1990; Dow 2016), few studies examine how these contestations take place through intersectional social justice activism. An analysis of how women of color contest controlling images in activist spaces may facilitate possibilities for communities of color broadly and women of color specifically to imagine their humanity holistically outside of the ideological confines created by the intersections of racialization, heteropatriarchy, capitalism, and anti-immigrant rhetoric.

To understand the relationship between intersectional activisms and controlling images, I conducted nearly three years of ethnographic fieldwork with California Latinas for Reproductive Justice (CLRJ), a statewide nonprofit organization engaged in intersectional reproductive politics, to understand how CLRJ uses intersectionality to deconstruct the image of the hyper-breeding welferera while building partnerships across markers of difference. In one of my dissertation chapters, I focus on the participation of CLRJ in the Maximum Family Grant (MFG) Rule coalition.3 This partnership successfully repealed the MFG rule in California, a family caps policy that previously denied financial assistance to children born while their families received CalWORKs basic needs cash grants except in ‘proven’ cases of rape, incest, or failed long-acting contraceptives. CLRJ’s work in this coalition highlights the central principles of reproductive justice theory and activism: the right to parent, not parent, and parent the children you do have in healthy and safe environments (Ross et al. 2017).

The Power of Discourse: Black Welfare Queens, Latinx Welfereras, and other Controlling Images

While Collins and others discuss images of mammies, matriarchs, jezebels, and welfare queens as archetypes that delimit and punish expressions of Black womanhood, ‘the welfare queen’ stereotype, in particular, has taken center stage in reproductive politics (Roberts 1997). The welfare queen is conceived as sexually promiscuous, morally lacking, neglectful, and hyper-fertile. This representation and subsequent fears of drug-addicted mothers ‘cheating the system’ and criminally-bound children has justified coercing Black women to use dangerous long-acting contraceptives such as Norplant and implementing welfare reforms in the 1990s that continue to drive poor families deeper into poverty (Roberts 1997). Similarly, the controlling image of the Latina breeder has existed since the advent of Spanish colonization in what is now Mexico, when Spanish settlers lauded the perceived hyper-fertility of indigenous women and encouraged reproduction between indigenous women and mixed-race soldiers as a means of physical and cultural genocide (Chavez 2008; Huang 2008). Yet, while the Black welfare queen is typically portrayed as an irresponsible and negligent mother, the Latina breeder is depicted as overly invested in motherhood, supporting stereotypes of Latinas as morally (read: religiously) traditional and family-centered (Gutiérrez 2008).

Racialized immigration concerns have uniquely molded the image of the Mexican-origin woman as breeder, as the possibility of a growing ‘unassimilable’ population of so-called ‘anchor babies’ and their undocumented immigrant parents challenges the U.S. nationalist identity founded on a white imaginary (Huntington 2004).4 The emergence of the immigration control movement in the U.S. unearthed a heightened nativism resulting in state-sponsored attempts to limit the reproductive capacities of immigrant women of color and encourage U.S.-born white women to reproduce. Fears of Latina over-fertility have justified restrictionist immigration policies and the coerced sterilization of Puerto Rican women (Silliman et al. 2004) and Mexican-origin women (Gutiérrez 2008) through government-sanctioned family planning programs.5 For example, during the 1960s and 1970s, doctors at Los Angeles County-USC Medical Center sterilized numerous Mexican-origin immigrant women without their informed consent due to a well-funded government incentive focused on family planning programs to limit population growth. Doctors and nurses attempting to complete rush labors encouraged monolingual Spanish-speaking women to sign forms authorizing tubal ligations, forms available only in English at the time.

The immigration dimensions of reproductive politics are especially salient in the construction of the anchor baby as an image that justifies restrictive eligibility guidelines for public assistance; for example, requiring immigrant women to have sponsors whose income must be included in applications for federal benefits. Debates regarding the rights of ‘anchor babies’ also yield a paradoxical condition regarding political coalitions. For instance, the Center for Medicare and Medicaid Services revised the healthcare restrictions for undocumented pregnant women in the 1990s, changing the definition of a child to include an unborn fetus (Huang 2008). While this policy reform increased vital access to pre-natal care for undocumented pregnant people, it undermined the rejection of fetal personhood as a bedrock of reproductive rights rhetoric.

Reproduction is an inherently political endeavor that contributes to the construction and maintenance of nation-states, and it also reconstitutes global political processes (Gal and Kligman 2000; Hansen and King 2013; Solinger 2005). In this context, the binary thinking that undergirds controlling images takes on a unique manifestation for Latina immigrants. The prevalent discourse surrounding Latina reproduction amidst the rise of Propositions 187 and 227 along with the Personal Responsibility and Work Opportunity Reconciliation Act of 1996 reflect the extent to which the wombs of women of color become sites of racialized, gendered, and classed violence (Gutiérrez 2008). The confluence of structural realities for Latinx and policies attempting to undermine their reproductive autonomy make the hyper-breeding welferera an epistemological reality that Latinx contend with in social, political, and cultural arenas.

CLRJ waged a campaign rooted in what I term decolonial, coalitional, and cultural shift strategies and Latinx feminist consciousness. In so doing they advocated for poor Latinx and Black families without legitimzing respectability. By emphasizing the reproductive injustices experienced by poor women under the purview of the MFG rule instead of the importance of public assistance in constructing valuable members of society, CLRJ’s campaign shifted the narrative away from respectability politics to self-determination. In this case, decolonial strategies move pathologizing perceptions of Latinx reproduction outside of the realm of individualism by analyzing the oppressive social contexts in which poor Latinx experience their reproductive lives as products of settler colonialism. Using community-based policy advocacy and coalition work at the intersections of reproductive and economic justice, CLRJ uses coalitional strategies to demonstrate how economic insecurity is an issue of reproductive politics. Lastly, the organization enacts what they term cultural shift strategies by constructing humane, counter narratives that highlight the complex experiences of Latinx communities to dismantle the ‘welferera’ image. Undergirding these strategies is a basic principle of the reproductive justice framework: the necessity to understand members of Latinx communities holistically by examining how the social relations manifested through the interconnections of identities affect possibilities for self-determination. The findings highlight how the hyper-breeding ‘welferera’ emerges as an intersectional phenomenon and a site of contestation in reproductive politics, and the possibilities that lie in moving beyond concerns of appealing to political liberals and moderates and instead, advancing a radical politics of community autonomy.

Extensive policy research demonstrates that family caps policies do not alleviate poverty but rather drive families into deeper poverty; yet, as of June 2018, seventeen U.S. states maintain family caps policies.6 Furthermore, research shows that these policies are associated with health problems for children due to the toxic stress of prolonged poverty. Given that family caps policies disproportionately affect women of color and their children through ideology and legislation, the work that CLRJ, their partners, and supporters did to repeal California’s family caps policy suggests that we continue questioning the extent to which narratives of deservingness, made manifest through controlling images, continue to impede in the self-determination of families on the margins.

Rocío R. García is the recipient of the 2017-2018 Constance Coiner Graduate Award and a 2017-2018 Travel Grant. She was also awarded a Travel Grant in 2016-17, and previously contributed “Imagining Utopias: Towards Latinx Feminist Thought” to the CSW blog.

Foucault, M. 1966. On the Order of Things: An Archaeology of the Human Sciences. Vintage.

Hansen R. and D. King. 2013. Sterilized by the State: Eugenics, Race, and the Population

Huntington, S. 2004. Who are We: The Challenges to America’s National Identity. Simon & Schuster.

Kelly, M. 2010. “Regulating the Reproduction and Mothering of Poor Women: The Controlling Image of the Welfare Mother in Television News Coverage of Welfare Reform.” Journal of Poverty 14(1): 76-96.