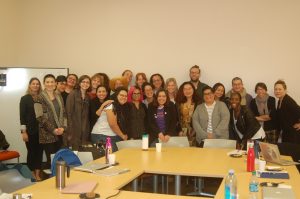 Writing a blog post about Sara Ahmed, who is herself a prolific and incisive blogger, feels like a distinct challenge. Ahmed has described some of the most recent posts on her blog, Feminist Killjoys, as companion pieces to her 2017 book Living a Feminist Life. The book opens with the claim that she was writing it “as a way of holding on to the promise of that word [“feminist”], to think what it means to live your life claiming that word as your own: being a feminist, becoming a feminist, speaking as a feminist” (1). The focus of Ahmed’s talk and one-time graduate seminar at UCLA last month was the middle section of Living a Feminist Life, “Diversity Work,” which recounts and theorizes (“descriptive work is conceptual work” (13)) the experiences of “diversity workers” working in universities.

At the forefront of Ahmed’s work is an awareness of the framing conditions of her thinking: her vexed relationship with the academy and all of its accompanying specificities of knowledge-production, her position as a queer woman of color, her choice of blog posts as a medium of expression that fundamentally altered her writing, down to its syntax, to name just a few. These conditions have sometimes shaped institutional responses to her work. For instance, Ahmed recounted the feedback she received from her editor to cut out the “Diversity Work” section entirely, since it reiterates many of the arguments that she made in an earlier book, On Being Included: Racism and Diversity in Institutional Life; she insisted on keeping the section in order to rework her findings from interviews with diversity workers in the context of what it means to live a feminist life, to rewrite the same concepts in a different idiom, or, in Ahmed’s words, to put ideas out into the world and have them come back in a different form. This insistence on repetition, not simply repetition with a difference but repetition that makes a difference, is an organizing logic that undergirds the section as a whole, and the book more broadly. Keywords and concepts from even earlier works in Ahmed’s oeuvre are scattered throughout Living a Feminist Life as well—“promise,” “sensation,” “will,” “impression”—and indeed, they reappear in new forms, suggesting their original context while also accruing the significances of newly proximate terms.

Speaking in part about her recycling of critical terms, Ahmed mused during the seminar that, to her, “the word ‘new’ is the most hopeless word in the English language.” She alluded to accusations made by her former colleagues that by holding on to feminism as a method, object, and way of life, she was clinging to outmoded identity politics and remaining an 80s feminist in the midst of new possibility. But she likes the historical baggage of old words, Ahmed confessed, and believes wholeheartedly in wearing on our sleeves our indebtedness to earlier thinkers and workers who operated under the sign of feminism. This indebtedness, too, is a crucial part of her approach, articulated in terms of “citation [as] feminist memory” (15). Living a Feminist Life was purposefully written without citing any white men because, as Ahmed proclaimed, “The more he is cited the more he is cited,” one of the several perfectly reduplicated phrases in her talk that, by virtue of their very syntax, speak to the perverse logic of intellectual inheritance. By citing instead feminist thinkers like Audre Lorde, Chandra Talpade Mohanty, and, of course, herself, in this project of feminist living, Ahmed shows us an archive of feminist lives, living and lived.

What continues to move and startle me about Ahmed’s work is her ability to describe in such careful terms the almost indescribably minute sensations of a given moment, and rather than stopping at that micropolitics of sensation, to go on to give a material account of that affective experience. Ahmed’s insistence on descriptive work as theoretical work, on thinking through the quotidian flows and stoppages of seemingly immaterial forces does not obscure questions of power, because she understands that it is possible to narrate ordinariness without them. It is certain bodies that are stopped, certain bodies that are allowed to pass through.

The sensory particularities that Living a Feminist Life conjures are, without fail, given feet in the world of lived experience. A central image of the book’s “Diversity Work” section is that of a brick wall, figured variously as a job description, a “life description,” an actual, physical barrier, etc. Ahmed recounts diversity workers who reported that their job can feel like banging their head against a wall, then immediately clarifies that the wall is not exactly a metaphor:

A wall is what you come up against. It is a physical contact; a visceral encounter. When I write this, I might not at first be talking of literal walls. A wall is an effect of coming up against.

The likeness is the effect.

Building on this thought in the seminar, Ahmed observed that “what makes walls hard is that not everyone can see them,” and later, in her talk, that “deviation [from norms] is made hard.” That insistence on “made,” on the process by which the force of “coming up against” is brought into existence, is an insistence on the fact that metaphors, despite trafficking in “likeness,” nevertheless produce concrete “effects,” albeit unevenly distributed along the lines of race, gender, class, sexuality, ability, and more. The wall is an experience of confronting history’s accretions solidified into a force that feels somehow both like it came out of nowhere and that it has always been there; to break through, feminism, too, must accrete into a force, one that can recognize and contest the process by which walls are continually made and made sensible. This is the wellspring of Ahmed’s descriptive practice, just as it is also that of her citational, scholarly, and political practice.

Dandi Meng is a first year graduate student in the Department of English at UCLA, who participated in a graduate seminar with Sara Ahmed hosted by CSW on February 13, 2018.