Contemporary portrayals of female sex workers in the mainstream cinema draw on archetypes of “the fallen woman” who could not overcome and had to turn to selling sex as a last resort. Many of the most prominent films in Hollywood depicting sex workers evoke a narrative of victimization and criminality: Klute (1971), Mighty Aphrodite (1995), L.A. Confidential (1997) and, most prominently, Pretty Woman (1990). The lack of variety offered by Hollywood to viewers (who may otherwise have no knowledge of the sex industry) obscures the myriad of experiences and reasons for entry into the sex industry, and presents an oppressive paradigm of sex work as a universal truth. In their film short, Lucid Noon, Sunset Blush director Alli Logout offers an alternative narrative of the sex industry from the perspective of those in the industry. Logout crafts a cinematic experience that holds space for the complexities of sex work and the strong femme relationships that form such disavowed spaces. This sex worker femme aesthetic offers an alternative narrative of the experience of sex work that centers femme solidarity rather than a criminal alienated victimhood. 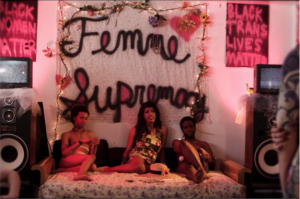 Heart Throb sits on a futon flanked by two other femmes of color. A banner behind her reads “Femme Supremacy,” while banners on either side read “Black Women Matter” and “Black Trans Lives Matter.”

Lucid Noon, Sunset Blush tells the story of Micha, a seventeen year old “baby queer” who has just been kicked out of her house for watching lesbian movies on Netflix. She is welcomed into The Palace, a basement full of queer femme sex workers of color, by Heart Throb, the house mother. The opening shot centers Heart Throb sitting on her futon throne surrounded by signs reading “Femme Supremacy” “Black Trans Lives Matter” and “Black Women Matter,” while two other house mates count money around her. “Look baby I’m going to be real with you, come here… Baby gays just like you are always coming up in here ‘house me’, feed me’, ‘fuck me’, ‘please Throb’- it’s exhausting! This ain’t a charity, you feel me.” Micha nods as Heart throb welcomes her with tough love matched with a promise of community and compassion.1 Here, Logout depicts a common “coming out” trajectory for those in the South, which includes moving to the nearest big city in hopes of finding more inclusive space.2 However, these big cities are not the queer havens many people of color are looking for, as racism in these spaces is still rampant, resulting in small enclaves of queer people all over the South. Micha being able to find and join such a collective of queer femmes of color was such an important moment for Logout as a writer, as they were able to show on screen “the feeling that you aren’t going to die anymore.” Finding these queer enclaves is a matter of life and death in the South.3 Logout thus makes these femme relationships the focus of their film since femme-phobia is rampant in queer and sex worker communities, as well as society in general. As Logout puts it: “there is not enough fem4fem, this film is hard femme for hard femme.”4

Logout not only highlights the familiar companionship among these queer femme sex workers, but also their sexual and romantic relationships with each other. Lucid Noon, Sunset Blush includes a sex scene between housemates Nova and V, both black queer fat femme sex workers. This sex scene is significant as it gives visibility to bodies typically deemed undesirable and asexual in the mainstream media, and thus allows people to see themselves as sexual and attractive in their viewership of the film. As Logout put it: “I don’t see bodies like my own being fucked on screen.” Logout wanted “to show the reality of sex and our sex and the sex that I have, and the bodies I fuck.”5 Martinez-Crespo articulates their experience of the film,

“Growing up a thick, curvy brown person, I was stripped of expressing what I felt passionate about, especially having desire for other women. Undoing body shame only began when I was able to define society’s efforts to associate fat bodies with undesirability, and to strip fat people of their desires…As a film directed toward the experience of budding queers, this scene alone has dulled fears of undesirability and the ghosts of body shame that I’ve carried from my late teens.”6

Furthermore, Lucid Noon’s depiction of the sex had by sex workers offers an alternative to what is usually shown by more mainstream sources. First, it depicts the sex as mutually pleasurable and intimate, showing both Nova and V kissing and pleasuring each other as well as the humorous exchange of conversation after the sex. Most depictions of sex workers having sex in the mainstream media show a female sex workers getting on her knees and providing oral sex to her client, often in an attempt to emphasize an exploitative and distant nature of being a sex worker. Logout does not depict a client/provider sex scene at all, positioning sex work less as a fixed identity and more as a mundane, but nonetheless integral, facet of sex worker’s lives.

The familiar and romantic relationships that Logout re-centers are vital to queer survival in the South, as mentioned above. These everyday, quotidian practices, as theorized by Tina M. Campt, are necessary for the survival of community. Campt articulates how, despite their routine nature, these acts should not be interpreted as passive.7 They are acts of resilience, survival, and resistance in the face of structures that would otherwise have queer people of color disappear. The queer femme sex workers of color living in The Palace have come together out of necessity but that does not render their community making as passive nor compliant in their own disposal. The Palace’s community of love and compassion resists dispossession that would render them disposable; such community making is an everyday act of refusal.

Logout’s depiction of familiar bonds and relationships within the underground community of sex workers is significant in light of the criminalization of sex work in the United States, where laws effectively prohibit the formation of relationships among or with sex workers. End demand policies (also known as the Nordic Model) seek to criminalize third-party participants (pimps and traffickers) and patrons of sex workers. Though the language varies by state, the laws regarding the third-parties involved are written in such a vague manner that anyone benefiting from the wages earned by illegal sex work can be charged with felony pimping or trafficking. For example, someone living with a sex worker, where rent is paid by funds generated from illegal forms of sex work can be charged. These policies criminalize sex workers’ relationships, ostracizing them from society. Logout’s depiction of not only the existence of sex worker relationships, but of them flourishing under a climate that has rendered them criminal is a beautiful depiction of resilient refusal. 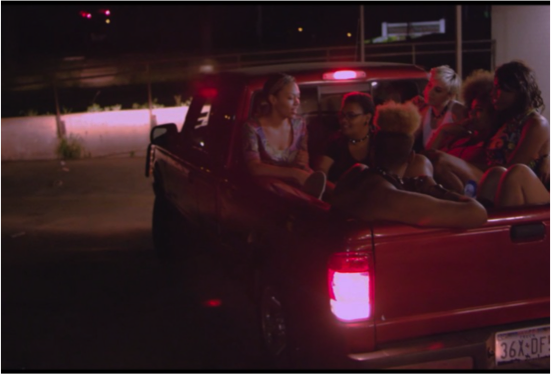 A group of Palace residents ride in the back of a red pickup truck.

Though The Palace is the material site of residence, where they sleep, fuck, and count their money, the queer femmes of Lucid Noon, Sunset Blush have found a definition of home as a psychic space of belonging that they carry with each other.8 Conceptualizing home not through longing for the supposed queer havens of New York City or San Francisco but through the creation of their own queer femme enclave at The Palace allows them to resist traditional spatial geographies that would have them separated and dispossessed. Logout’s creation of the mobile home-space of The Palace evokes Kellie Jones’s characterization of Michel de Certeau’s figure of the walker as one who rearticulates, reinscribes the city/state in their own image, a “migrational” force all but invisible to the city plan, outside the “panoptic power” of the grid. The walker exits from the proscribed geographic plan, and in doing so reconfigures it, improvising, inventing something new.9

Logout’s film constructs The Palace community as a walker. The walking, cruising and wandering of The Palace enclave of queer femme sex workers of color represents a refusal to be dispossessed, to be isolated and to be alone. This refusal to be contained to a specific area and by claiming space resists state regulation that would otherwise eliminate “undesirable” communities (queer, POC, sex workers) by means of segregation and policing. Not only do Logout’s group of queer femmes refuse to be contained or to disappear, but they also blissfully occupy spaces of necessity for the city/state. They occupy the public spaces of the roads in the most visible way possible: piled in the back of a bright red truck. They walk through canals that are filled with the life necessity of water. Despite dispossession, they refuse to disappear and continue to stroll and manifest their own home space.

Elizabeth Dayton in a Graduate Student in the UCLA Department of Gender Studies. She was the recipient of a 2016-2017 CSW Travel Grant.