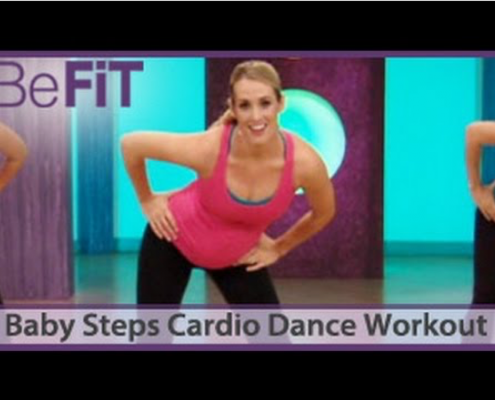 On online dance fitness videos: “Got baby booties on the brain but your own booty on the line?” asks Heidi Murkoff at the beginning of her prenatal dance fitness video, Baby Bump Bootcamp. With this leading question, Murkoff informs mothers-to-be that, when it comes to motherhood, looks count. Reducing complex phenomenology to a superficial lamina, she suggests that experiences of pregnancy are easily collapsible to women’s shared preoccupation with finding balance between planning baby accouterments and upkeep of their figures. Fortunately, she reassures in her subsequent remarks, she has designed a “back to basics dance workout” that can prepare pregnant women for “better booties postpartum.” In the same spirit, for her prenatal dance video, instructor Denise Austin says her routines will help mothers stay “fit and firm” through their entire pregnancies so that they can “get into that great bikini afterwards.” While these types of promises for visible results typify the jargon of many of today’s fitness classes, what is surprisingly absent from the fillips of either prenatal instructor is how her class is uniquely suited to pregnant bodies and their needs. By focusing on future possibilities of “great bikinis” and shapely “booties,” the videos absent the immediate and visceral pregnant bodies performing the choreography. The videos thereby evoke a complex and paradoxical phenomenology for pregnant participants in which their pregnant bodies become the obstacles, rather than the vehicles, for somatic mobilization and self-care. Murkoff’s and Austin’s are but two of tens of thousands of dance fitness videos currently posted online for pregnant women’s easy access. Like these two examples, most such videos prioritize the aesthetics of the body, and they teach that pregnant forms are aberrant and in need of re-formation. The premise behind these videos is often that pregnancy makes bodies “out of shape,” but that – thank goodness – dance can help them get back “in shape.”

My research explores choreographies related to women’s experiences of pregnancy. It asks what these dances mean and do for individuals while pregnant and later in life, and it considers how these dances reveal or influence the extent to which participants consider, value, and identify with their reproductive bodies. I am a choreographer with an MFA in dance and with longstanding interest in the body as it is understood through Western science and treated through Western medicine. Previously, I have approached pregnancy through the study of embryology and female reproductive anatomy, and I have also looked at how pregnancy has functioned symbolically in Western concert dance. For my doctoral research, I am interested in expanding my definition of choreography to bridge the gap between my heretofore separate investments in the biological and expressive bodies. Theorizing through the dancing body, I am broadening dance to include a variety of stylized embodied practices surrounding pregnancy including prenatal check-ups and birth preparation classes.

Recently, my research has looked at the choreographies of prenatal dance fitness classes – dance classes marketed to prepare women’s bodies for birth and motherhood. I’ve been interested in the embodied rituals these classes coach and, more specifically, the language and imagery they employ to invite pregnant women into a shared phenomenological space. Of particular interest has been how anatomy and physiology are explained and experienced in these contexts and how codified physical performances enacted by women in these fitness spaces inform women’s sense of agency and ability during later exertions in delivery. I am very interested in comparing the language used to explain pregnant women’s anatomy in dance fitness classes to language used to explain women’s anatomy in prenatal medical contexts, especially that used to direct how and why pregnant women should and should not move their bodies. Putting these different prenatal movement pedagogies into relationship with each other, I’m looking for correlations and contradictions and considering if and what prenatal dance adds to women’s embodied sense of pregnancy. I’m examining if pregnancy provides the impetus and dance the opportunity for pregnant women to experientially explore both their tangible and intangible notions of body in the interest of cultivating self-awareness, self-acceptance, and tools for self-expression.

Moving forward, I will be looking more at the experience of pregnant women in Los Angeles OBGYN contexts from a performance studies perspective, paying special attention to the choreographies of hospital OBGYN contexts and analyzing the prescribed, normative bodily movements of pregnant women in clinical settings as dances. This analysis will be supported by conversations with women who have had recent experiences of pregnancy and delivery as well as discussions with nurses and nurse-midwives about their experiences coaching germane movements for birthing. Of special interest to me remains the diction and imagery women use when recollecting what their bodies were told to do and asked to feel as well as how they describe their own movements and senses of how they preformed at various points along their pregnancy trajectories.

My driving research questions: When intended for pregnant women, how is movement differently described and how does this language teach mothers about the way their bodies work and what their bodies mean? Are women who intentionally dance while pregnant empowered to experience giving birth and then their maternal bodies differently than women who do not seek out expressive embodied experiences while pregnant? To what extent does the interpretation of the body in prenatal dance classes reinforce or juxtapose the interpretation of the body in Western OBGYN contexts?

End goal: Part of my larger doctoral intention is to carefully define, design, and implement an accessible, community dance practice for pregnant women. I hope to provide support and creative space to cultivate physical strength and intuition by kinesthetically exploring changing bodies, physical abilities and limitations, emotions, and social needs, all with a spirit of wonder, play, and acceptance. Such perspectives will hopefully balance the sometimes impersonal, disempowering and fear-inducing messages that pregnant women receive about their bodies in OBGYN contexts. My project promotes dance as a tool that liberates, rather than polices, women’s bodies, which, especially surrounding female reproductive health, is of vital, immediate, and increasingly pressing importance.

Johanna Kirk is a graduate student in the UCLA Department of World Arts and Cultures/Dance. She received a Travel Grant from CSW in Fall, 2017.