Terri Conley will deliver the keynote address at Thinking Gender, Pre-Existing Conditions on Thursday, March 1. Join us for both days of the conference to experience panels, posters, roundtables, and art exploring the connection between gender and health!

The Centers for Disease Control report that STIs have particularly severe consequences for young women. Undiagnosed STIs cause 24,000 women to become infertile each year. Source: https://www.cdc.gov/std/products/infographics.htm

It’s time we had the sex talk. While discussions of sex have evolved throughout generations, people have differing comfort levels, opinions, and ideologies surrounding sex depending on where, how, and when they grew up. Pop culture depictions of sex—as seen in media like Fifty Shades of Grey, Masters of Sex, Outlander, Orange is the New Black, Girls, and (slightly older, but the OG) Sex and the City—have changed the way we view and talk about sex, sexual desire, and sexual relationships. It’s important that we have these conversations—with our kids, partners, friends—to dispel the misinformation and myths surrounding sexual health. The consequences of this incorrect information, including unintended pregnancies and STDs, can be life-long and costly.

One researcher leading discussions around sexual health, sexuality, and relationships is Dr. Terri Conley. Conley holds a PhD in Social Psychology from UCLA and is an Associate Professor of Psychology at the University of Michigan. She has spent her career investigating gender differences in sexuality, the consequences of departures from monogamy, and the consequences of masculinity threat. Much of Dr. Conley’s research focuses on stigma towards particular relationship types, and the impact of those stigmas on sexual health. Her work spans the relationship spectrum: she studies singles, monogamous couples (in various forms), non-faithful partners, and consensual non-monogamous couples. Conley’s work reveals that presumptions and assumptions regarding relationship types have implications for how people act within relationships and sexual partnerships, impacting their own sexual health risk.

Take, for example, comparisons between the stereotypes of single and coupled individuals. Conley and Barry E. Collins found that single people were perceived to be more sexually risky than people in relationships. Additionally, study participants perceived men as being more at risk for STDs than women, and women subsequently reported that used the perception of men’s riskiness as a deciding factor in choosing sexual partners.1 For these study participants, assumed risk determined sexual behavior rather than substantiated STD screening results or verifiable sexual history. Conley and colleagues have also investigated gender differences in casual sexual encounters. These studies demonstrated that women foresaw more negative social ramifications for themselves than for male peers if they chose to engage in casual sex. In fact, men thought that they would only be perceived negatively if they rejected a casual sex offer.2 This casual sex example further illustrates how perceptions, presumptions, and social norms may play a larger role than sexual health education in dictating sexual behavior.

Furthering this research, Conley and Leticia Anne Peplau published a paper in 2010 that discussed how people within heterosexual couples view themselves and their partners with regard to STD risk, STD knowledge, and sexual health behaviors. They found that women perceived male partners’ STD risks as being lower than the men rated themselves. In contrast, men rated their female partners as having higher STD risk, less sexual knowledge, and engaging in less sexual health behaviors (i.e. condom use) than the woman would rate themselves.3 All of this suggests that women seem to feel less at risk when in a heterosexual relationship, and that they assume their partnerships insulate them from the risk of STDs.

Conley’s work has also made significant contributions to discourse on monogamy and consensual non-monogamy. She has shown that many people view sexual monogamy as the foundation of social culture, and as the only socially acceptable way to have a long-term relationship. In contrast, non-monogamous relationships (which Conley defines “any relationship arrangement in which the partners agree to have extra-dyadic sexual or romantic relationships”) are stigmatized.4 Moreover, these different relationships may have varying effects on sexual health. Conley has found that unfaithful partners who claim to be monogamous are less likely to use condoms and to more likely have sex under the influence of drugs or alcohol (reducing their ability to use condoms correctly or consistently) while consensual non-monogamous partners engage in less sexually risky behavior.5 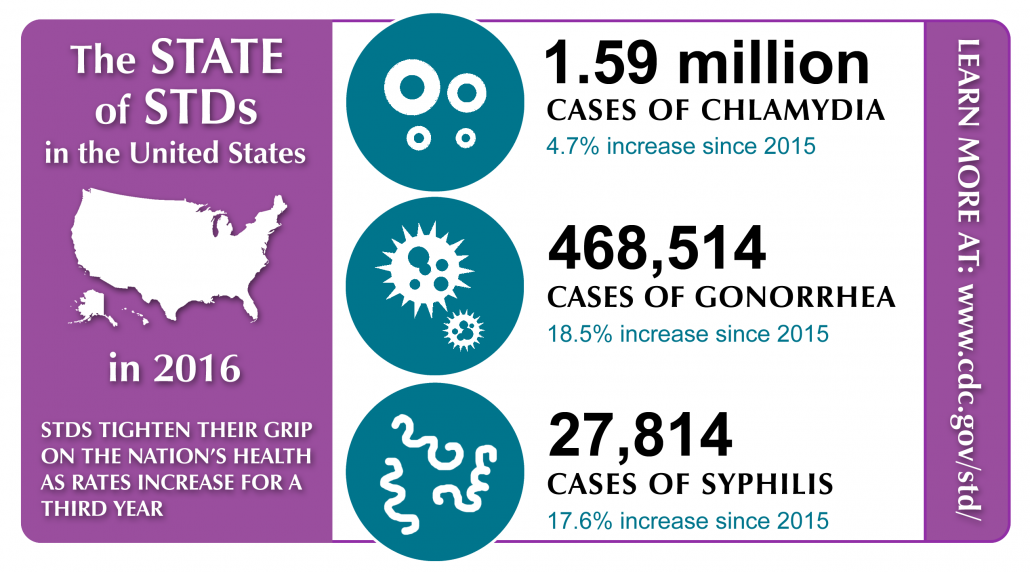 The Centers for Disease Control continue to document high incidences of STDs in the United States. Source: https://www.cdc.gov/std/stats16/infographic.htm

Conley’s research has implications not only for understandings of human sexual behavior, but also for the development of sexual health programs that aim to reduce STDs. From 2015 to 2016, rates of chlamydia, gonorrhea, and syphilis among adolescents and young adults increased, demonstrating the need for continued develop of successful strategies to reduce STD incidence.6 Conley’s research highlights how some people may view relationships as a source of STD protection, and strategies to reduce STDs must take this factor into account. People in monogamous relationships may view themselves as being safe from contracting an STD because they are only having sexual intercourse with one person. However, this logic doesn’t account for monogamy failure (i.e. cheating and infidelity by one or both partners), nor does it account for previous, asymptomatic infections from past relationships for serial monogamists. Dr. Conley’s work helps to challenge assumptions about monogamy, non-monogamy, and sexual risk, providing new directions for health interventions.

Terri Conley will deliver the keynote address at Thinking Gender, Pre-Existing Conditions on Thursday, March 1. Join us for both days of the conference to experience panels, posters, roundtables, and art exploring the connection between gender and health!