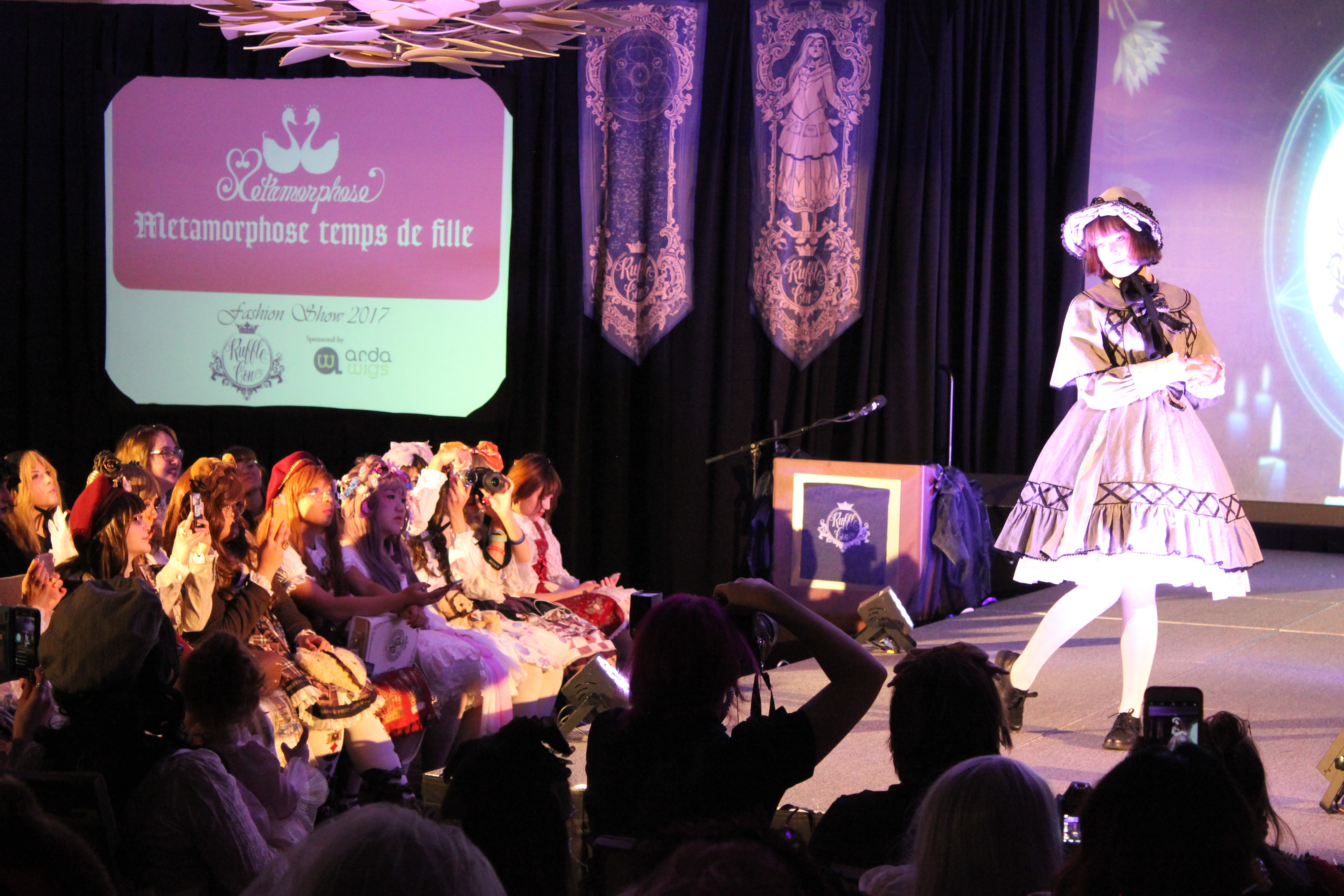 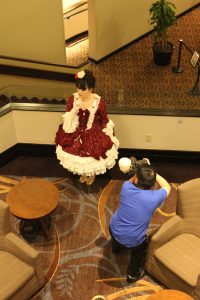 Sasa, the Montreal, Canada-based designer of Lolita and Ouji (prince-style) brand SA by Sasa poses for photos after her fashion show.

Stamford, Connecticut is kind of a bleak commuter town, about 90 minutes by commuter train from New York City’s Grand Central Station. The Stamford Sheraton hotel is a plain blocky midrange hotel like thousands of other chain hotels with all the bland practicality of institutional carpeting, a hard-working buffet, and canned wall art. But when I arrived at the Stamford Sheraton, via the red eye from LA to Newark, a trek across New York City on various buses and trains, and a final 15 minute trudge in an icy-sharp wind from station to hotel, the Sheraton was already a riot of color, lace, ruffles, and wigs. I was arriving at the beginning of the fourth annual RuffleCon—“a Northeast USA Alternative Fashion Conference” and basically the only convention for Japanese subcultural ‘Lolita’ fashion in North America.

While of course the word ‘Lolita’ might first bring to mind the eponymous nymphet of the infamous novel by Vladimir Nabokov, Lolita fashion adherents look more like Victorian dolls, favoring endless permutations of puffy, petticoated knee-length skirts, tiers of ruffles and puffy sleeves, very buttoned up necklines and covered shoulders, lace up bodices, bonnets or big flowery headpieces, wigs and hairdos of bounteous waves or ringlets, printed tights and platform shoes with maryjane straps or laces. These fashion lolitas take their cues from a family of interlocking Japanese fashion subcultures, whose general title “Gothic Lolita” has over the last twenty years or so evolved into myriad varieties like “country lolita,” “classic lolita,” “ero-lolita” (short for erotic), elegant gothic lolita (EGL), ‘ouji’ (prince) style, and “sweet Lolita.”1 Nabokov’s Lolita doesn’t really factor in at all, except that her signature girlishness (not the precocious sexuality attributed to her by the book’s narrator and legions of readers since then) is also front and center in the over-the-top frills, bows, and lace.

Over-the-top girliness combined with the emphatic anachronism were what drew me to studying Gothic Lolita subcultural fashions in the first place: in my current book project I’m looking at a series of fashion controversies and subcultures, in which what people were wearing and how they were wearing it have had major effects on how aspects of subjectivity— including gender, sexuality, class, race, and nationality—are established. Gothic Lolita is part of my examination of a number of historically minded contemporary subcultural fashions (also including goth and steampunk). In asking whether a fashion statement could be an historical narrative, I’m both working to recognize how all histories exist as narratives on a continuum with fiction (a commonly recognized aspect of contemporary, postmodern history writing) but also working to expand the notion of who a historian is. If we look at the playful and creative modes of Gothic Lolita participants’ engagement with a Japanese-inflected fantasy of European historical dress as a form of history-making, we begin to open up history to a range of people who are typically ignored as makers and consumers of history: women, especially young women and girls, amateurs, and fashion fans. 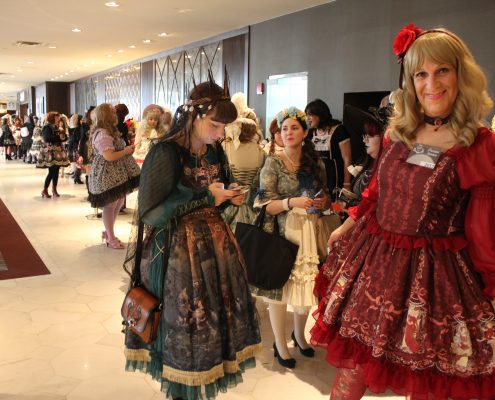 Rufflecon participants in the Stamford Sheraton lobby await entry to the next fashion show event. In the foreground (right), Andrea Nicole Baker, a prominent Atlanta, Georgia area Lolita enthusiast poses for the camera.

With the help of a UCLA Center for the Study of Women faculty research grant, I spent my time at the conference talking with participants about what drew them to the spectacular, anachronistic fashions of Gothic Lolita and grappling with the ways that fashion foregrounds details about bodies and identity: size, race, gender presentation, age. These personal aspects thus get folded into any larger messages the fashion presents about culture, history, and of course pleasure and enjoyment. That is what I am interested in amplifying in an academic context: the ways in which individual personal aspects matter to history—bodies matter—materialities matter—who makes the history matters, what history looks like matters, and how it feels matters too.

Michelle Liu Carriger is an Assistant Professor in the Theater Department and specializes in the historiography of theater, performance, and everyday life. Her project, Modes of ReDress: Fashion Controversy, Embodiment, and Performance, looks at how clothing and fashion function and have functioned as mechanisms of subject formation in the 19th century and today. She was awarded a 2017-2018 CSW Faculty Research Grant to assist with this project.