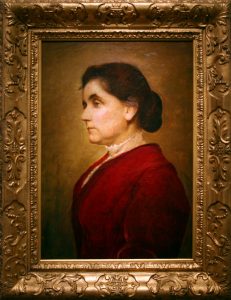 On the three days that I was able to attend, women were well represented in the audiences of the plenary addresses, if men appeared to speak in greater numbers. At least one of the sessions including a woman speaker and chair was well-attended, and at least one woman there asked a question–a pertinent one.

If anything stands out from this brief overview, it must be the ubiquity of Jane Addams–discussed by men as well as women and represented in plenaries, conference papers, and books. (Though she is not found among the dissertations, given the conference papers, this is probably only a matter of time.) On the other hand, though she is given the nod by many projects, it is not so sure that she is always given more than that. In the plenary on John Dewey it was admitted that Addams was sometimes used as Dewey Spark Notes or Dewey Lite.

In addition, it stands out that Addams is the only 19th century woman philosopher discussed; all the rest are 20th or 21st century. Were there no other women other than Addams, a settlement operator and social worker whose midwest college had just been upgraded from a female seminary, to match with James, Peirce, DuBois, and Royce? Is Addams really the only example of an educated and intellectual woman in the late nineteenth century? Is she the best one? For that should surely be the criterion. Could implicit tokenism be at work in the history of American Philosophy? It’s worth asking.