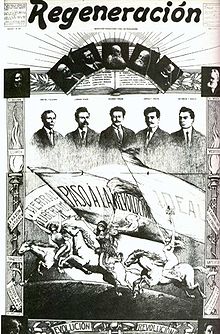 In September 1910 the prolific Mexican anarchist, Ricardo Flores Magon, foretold the coming of the social revolution. “Revolution approaches! With angered eyes, and flaming hair… Her fists are the invincible fists of a people in rebellion. She does not come with roses or caresses; she comes with an axe and a torch.”1 Magon’s prediction was published in his magazine Regeneración less than a month before the outbreak of the Mexican Revolution. Magon and the Mexican Liberal Party (PLM) had been fomenting rebellions in northern Mexico years before the country’s elites began to call for re-elections. As the outbreak of the revolution grew nearer, Magon continually demanded Regeneración’s readers to rise against the Mexican state. In this short article, I aim to introduce my research on the PLM’s distribution of revolutionary labor to the community of feminist scholars. After much deliberation, I decided that the best way to do this is by sharing my analysis of the source which first sparked my interest into the subject— Magon’s article “A La Mujer” (To Woman.) This source prompted me to ask a crucial question; how did the depiction of the revolution as a woman (as described above) compare to or affect women’s actual responsibilities within the Mexican Liberal Party? In order to address this question, I will analyze the dichotomous language Magon utilized in “A La Mujer.”

As the political tensions in Mexico burgeoned, Magon and the leaders of the PLM made repeated attempts to persuade their readers to engage in the armed struggle. This call was replicated to some extent in “A La Mujer.” As per usual, Magon utilized his article to speak against poor working conditions and starvation wages. What is particularly notable about this passage is Magon’s decision to present worker exploitation within a gendered framework by demonstrating how the extant economic and social systems exploited women’s labor power. Magon urged women to oppose the Profiato’s capitalist system on the basis that it subjected them to sexual exploitation both within and outside of the working place:“They [the capitalists] would rob you of your virtue in the same cowardly manner as you are robbed of the product of your labor.”2 He continues by arguing that women’s inability to secure equal wages regularly forced them to enter the sexual economy. This willingness to acknowledge and address women’s issues in the capitalist system is indicative of anarchism’s ability to incorporate women into the construction of an anti-authoritative society. Unfortunately, Magon and the PLM did not follow through on this opportunity, choosing instead to integrate sexist understandings into their ideology.

Although Magon argued against Mexican social customs which “placed the wife under the custody of the husband,” he himself failed to recognize women’s identities as distinct from the identities of the men in their lives.3 A woman’s value in the revolution was measured through her relationship with the male proletariat. This is demonstrated in Magon’s decision to induce women’s revolutionary spirit by reminding them of their traditional familial duties. “Are you mothers? Are you wives? Are you sisters? Are you daughters?”4 Having articulated the limitations of working women’s identities, Magon proceeded by gendering the distribution of revolutionary labor. “Your duty is to help man; to be there to encourage him when he vacillates; stand by his side when he suffers; to lighten his sorrow; to laugh and to sing with him when victory smiles.”5 The image of the woman warrior described in the beginning of his article, was replaced by a passive character who was expected to brandish not “the axe and the torch,” but an assortment of “roses and carresses.”

Magon’s description of women’s precarious position in the capitalist system, would allows us to believe that they were the biggest stakeholders in the revolution. And yet, he did not urge them to engage in the armed struggle against the Porfiriato. Instead, Magon compelled women to “Demand that your husbands, brothers, fathers, sons… pick up the gun. Spit in the face of those who refuse to pick up a weapon against oppression.” 6 What had begun as a promising declaration against extant patriarchal structures culminated in the reaffirmation of the same social environment Magon had lambasted. He failed to supply any applicable remedies to the injustices he had enumerated in his article, such as wage inequality, socioeconomic dependence, sexual exploitation, etc. Instead, Magon delineated women’s emancipation to the sidelines of the revolution. Presumably, their enfranchisement would take place after their men had freed them. Although their repression was “more sorrowful, more sinister, and more infamous,” women were not urged to participate in the armed struggle. 7 Magon’s distribution of revolutionary labor forced women to subsume limited and passive roles.

Of course, this would not truly be feminist scholarship if I limited my research to men’s understandings and expectations of anarchist women. Despite these rigidly constructed gender roles, by 1913, women fought in guerrilla groups, smuggled weapons into Mexico, and helped distribute anarchist propaganda behind enemy lines.8 Analysis of “A La Mujer” merely provides a framework of questions which will direct the scope and theme of my thesis. My research will trace the history of gender relations in the PLM through the lives of women who participated and contributed to its formation such as Juana Belen Gutiérrez de Mendoza, Rosa Mendez, and Margarita Ortega. In the future, I will analyze how these women rejected their ascribed passivity through what has been coined “Anarchist Motherhood.”9 I will determine how this gender construct was influenced by women’s understanding of anarcha-feminism and reproductive justice. My research will contribute to growing body of research on borderland history and the development of transnationalist anarchism.

Linda Esquivel received the 2016 Constance Coiner Undergraduate Prize from the Center for the Study of Women. She is majoring in History and Labor & Workplace Studies at UCLA. She has served on the editorial board for UCLA’s Aleph Undergraduate Research Journal. Linda has also presented her research at multiple conferences since arriving at UCLA. Her work highlights how the intersection of social control, union organization, and undocumented workers’ experiences is central to the historical construction of crimmigration in California’s Central Valley. Her research has been supported by the Mellon Mays Undergraduate Fellowship and the Bradford E. Burns Endowed Scholarship for History Students. After graduation, she plans to pursue a dual PhD in History and Gender Studies. She will be the first in her family to receive a college degree.