In Marlon Riggs’ 1989 film Tongues Untied, his character leaves the “sea of vanilla” that is the white gay enclave of the San Francisco’s Castro district for the Black gay spaces of Oakland’s Lake Merritt waterfront.[1] Nearly three decades later, this spatial juxtaposition may be less salient. Over the last several decades, the city of Oakland generally, and Lake Merritt specifically, have undergone waves of gentrification and a variety of rebranding projects that landed Oakland the number five spot on the New York Times’ international list of “45 Places to Go in 2012.” According to the Times, “New restaurants and bars beckon amid the grit.”[2] Over the last five years, real estate speculation and displacement in the Bay Area have made international headlines. Indeed, the last quarter century has marked a 40 percent decline in the number of Black Oakland residents, including Black LGBT communities, due primarily to postindustrial job loss, real estate speculation, and the forced relocation of Oakland residents from the city to the prison.[3] Meanwhile, Oakland has become an increasingly recognizable LGBT destination. In 2014, San Francisco Magazine deemed Oakland a “modern lesbian dreamscape.”[4] However, studies of gentrification and sexuality have overwhelmingly focused on white gay men, neglecting to account for the ways race, class, and gender position LGBT subjects differently in relationship to urban space. My dissertation project asks how ongoing U.S. settler colonialism and political economies of race, gender, and sexuality over the last three decades have shaped this conjuncture. 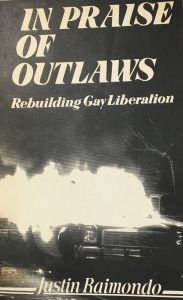 At a time when foreclosures, evictions, and displacement peaked, Oakland was positioned as a “lesbian mecca.” In light of that context, I turn to queer women’s experience of and participation in gentrification as a node at which to elaborate intersections of ongoing settler colonialism and neoliberal urban restructuring. I examine the ways Oakland city officials and developers have harnessed select queer narratives to bolster anti-Black state narratives of urban renewal, as in the case of an Oakland city councilmember’s bid to designate an official gay neighborhood. I also trace varying conceptions of queerness, space, place, and property in lesbian and queer women’s cultural production, including those spatial practices and imaginaries–notably Black queer and feminist political action and cultural production–that remain illegible to state power.

While urban displacement and Indigenous land dispossession are often understood as distinct or unrelated, I reveal their connections. I build from Native feminist scholars to situate these spatial contestations within conditions of ongoing settler colonialism that rely on racialized and gendered notions of property. Rather than examine several urban locales, however, I focus on Ohlone territories (in particular Oakland, CA and the larger San Francisco Bay Area) because I aim to demonstrate how, as epistemological structures of disavowal,[5] settler colonialism and neoliberalism ossify in place. I examine this location because of its significance to various political imaginaries. Though the Bay Area is exemplary of the conditions I aim to theorize, I do hope to make broader theoretical claims around queerness, neoliberalism, and colonial ontologies of space and place.

As geographer Katherine McKittrick reminds us, an antiracist, anticolonial feminist geographic practice is necessary because, “these rules are alterable and there exists a terrain through which different geographic stories can be told.”[6] I argue that much queer Black and Indigenous-led art, cultural production, and social movement exposes the contradictions of colonial spatial narratives and invites possibilities for remapping relationships to space, place, and land. Following Sherene Razack, Mishuana Goeman, and other Indigenous studies scholars, we must also recognize that the landscape of the neoliberal city scaffolds a settler state occupying Native nations. What would conceiving of settler colonialism as a structure bring to bear, beyond metaphor, on the relationship between settlement and gentrification, both of which are construed as inevitabilities that rely on shared spatial logics (for example, extraction, terra nullius, the frontier, civilizing discourses)? If, as Moreton-Robinson suggests, patriarchal white sovereignty operates ideologically, materially, and discursively to reproduce and maintain its investment in the nation as a white possession,[7] I ask how this field of power also operates through queer social and spatial projects resistant to heteropatriarchy. In their article, “Everyday Decolonization: Living a Decolonizing Queer Politics,” Sarah Hunt (Kwakwaka’wakw) and Cindy Holmes argue that in the context of a racist, homophobic, transphobic, and heteronormative patriarchy conditioned through colonialism, we must “ask critical questions about non-Indigenous queer and trans claims for safe space, rights, and belonging.”[8]

With the support of the Kanner Dissertation Research Award, I am asking those critical questions. I plan to conduct research at the San Francisco Public Library and GLBT Historical Society, where I will study the extensive papers of Barbara Cameron (Hunkpapa Lakota), co-founder of Gay American Indians in San Francisco, the Black Lesbian Newsletter/Onyx Collection, and the Old Wives’ Tales Bookstore Records. My dissertation chapter, “City on a Hill: San Francisco and ‘The Great Gay Migration’ in the Colonial Present,” engages the archives of San Francisco-based Lesbians Against Police Violence (1979-1981) and Gay American Indians (1975-1990), alongside a 1980 NBC special television report on gay real estate speculation in San Francisco, “Blacks versus Gays.” These historical texts archive political economic shifts of a burgeoning neoliberalism, including the heightened policing and urban spatial restructuring that continue to shape the historical present. I also discuss the 1992 International Tribunal of Indigenous Peoples and Oppressed Nations in the U.S., held in San Francisco, and organized by the American Indian Movement in coalition with Black, Chicanx, Puerto Rican, and feminist organizations, in addition to political prisoners and prisoners of war. Situated in the political economy of the rapidly-changing Mission district, the tribunal interrupted the city’s quincentennial celebration of Columbus Day, rejected the validity of the U.S. nation-state, and crafted a vision for the “next 500 years.” These movements anticipate and inspire the imaginative modes of resistance to violence and repression our communities face today, and invite ways of building more just spatial relationships in cities and beyond.

SAVANNAH J. KILNER is a doctoral candidate in Gender Studies. She received the Penny Kanner Dissertation Research Fellowship from CSW in 2017. Her scholarly work examines the politics of queer space in the context of ongoing settler colonialism and the carceral state. Savannah received her BA in Ethnic Studies from Mills College, and is active in and inspired by movements for housing justice, Indigenous sovereignty, and prison abolition. Her work has been supported by the Social Science Research Council, Institute for American Cultures, Bancroft Library, and UC Humanities Research Institute.

[4] Pulley, A. (2014) “Where the girls are: Oakland as modern lesbian dreamscape,” San Francisco Magazine.