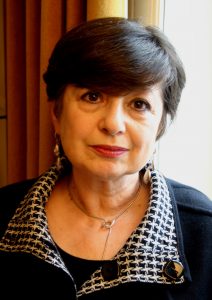 Ana Soto is one of the pioneers of research on endocrine-disrupting chemicals, through her work on the ways that chemicals like BPA impact mammary gland development and carcinogenesis. Professor of Integrative Physiology & Pathobiology at Tufts University, Soto has been been an active participant in the field as it has changed its thinking on endocrine-disrupting chemicals over time, and her work has impacted the field’s understanding of the harms that endocrine-disruptors, such as BPA, produce, intergenerationally, in humans. Witness to partisan and isolationist thinking and research, she argues for a return to an integrative theory of organisms that can account for interactions between different. She coordinates a multidisciplinary working group as the incumbent Blaise Pascal Chair in Biology (Ecole Normale Superieure, Paris), which is devoted to the elaboration of a theory of organisms.Her work on carcinogens has and cancer in the mammary gland has developed what has been called a “revolutionary perspective on cancer.” She and her collaborator, Carlos Sonnenschein, propose that instead of a cell-based disease (which is based on somatic mutation theory, or SMT, once the predominant theory in cancer research), cancers are, rather, defects of tissue architecture, making cancer a tissue-based disease. Their study of carcinogens shows that carcinogens disrupt the normal interactions among cells in certain organs, and that this disruption causes an inability of cells to “‘read’ their positional and historical background and a change in the appearance of the tissue.” In a retrospective on the last twenty-five years in research on endocrine-disruptors, Dr. Soto said in an interview, that “Endocrinology was once an integrative field, one of the main components of physiology. We need to embrace complexity again, and for this we need to think about a theory framework to guide this research.” In the same interview with the journal Molecular Endocrinology, Dr. Soto argued that the best thing the public at large can do to ameliorate the situation is contact our representatives. “The public should know that they need to contact their representatives. As stated in The Endocrine Society 2009 first public statement: a protective public health policy is needed. Individual action will not curtail exposure effectively.”
Find Dr. Soto’s interview with Molecular Endocrinology here: https://academic.oup.com/mend/article-lookup/doi/10.1210/me.2016-1044