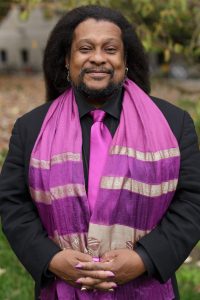 Tyrone Hayes is both a scientist and public health advocate par excellence. Professor of Integrative Biology at the University of California, Berkeley, Hayes is famous, and has been made infamous, for his research that identifies the herbicide, atrazine, as an endocrine disruptor. While Hayes’ research focuses on the ways that atrazine affects frogs exposed to it, the significance of his conclusions is far-reaching. Atrazine, the second most widely used herbicide in the United States, both disrupts (demasculinizes and feminizes) male reproductive development in frogs, and affects cells in fish, birds, rats and human cells similarly, causing a disruption in estrogen production and the development of reproductive cancers and birth defects. His research findings have made him the target of nothing short of character assassination by the Swiss company Syngenta, which manufactures atrazine and which initially funded early research on its possible effects (and which later pulled its funding and stopped all research once Hayes reported his first findings in effects on frogs to them). Attacks on Hayes by Syngenta make clear the stakes of his work to a broader public, but for Hayes this has been clear since the outset. His research and advocacy has identified atrazine and chemicals like it as posing threats not only to environmental health but also to public health, part of an emergent science that treats the two as fundamentally linked. The public health impacts of atrazine and chemicals like it break down unequally according to gender, race and class, and forms part of what is identified as environmental racism towards ethnic minorities, lower socioeconomic communities, people at risk because of proximity to contaminated areas through lack of mobility, at risk through an occupation with more exposure, at risk through less access to healthcare and to education.

Hayes breaks down his research findings, and their significance in “The Atrazine Rap”: