The word “Hars” (հարս) in Armenian translates to “bride” in English. The suffix “-eren” (-երէն) is frequently added to the name of a place including, countries or regions and indicates the language used by the inhabitants of that place. “Hars” and “-eren” merged together creates the word Harsneren, which comes to mean “Language of the Bride” in Armenian.

Harsneren was a gesture-based signing language in Armenia which developed due to speech taboos and a rule of silence imposed on married women. It was a non-verbal, gestural form of communication used by women instead of their spoken language. My ongoing study explores under what circumstances Harsneren developed, at what moments during their everyday lives women utilized it, and what the different signs and gestures are that women frequently demonstrated. 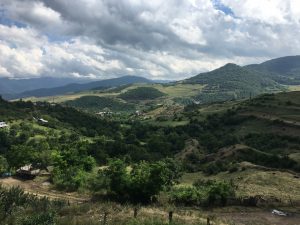 View from the home of one of the interviewees in village of Voskevan in the northeastern province of Tavush in present-day Armenia.

In efforts to learn more about Harsneren, I traveled to the villages of Baghanis, Voskepar, Voskevan, and Noyemberyan in the Tavush Province of present-day northeast Armenia, where the first and only study of the sign language was conducted in the early 1930’s. Proper observation and documentation of Harsneren was only possible through in-person conversations with regional women about the early uses of the sign language, possible contemporary uses in modern populations, and an examination of variations of the gestures among the different interview subjects.

From these in-person interviews, it was learned that young brides employed this sign language to communicate basic needs to members of their family; however, only when absolutely necessary, as communication was often prohibited for the young bride especially in the presence of her husband, in-laws, and certain other relatives. At the time, Armenian women lost what little agency they had upon marriage, and it was the patriarchal and social norms imposed on them in public and even private spaces which contributed to the rise and use of Harsneren over time.

Harsneren is no longer in active use in the four villages today. Some women described their use of it when they were young brides, while other women recalled their mothers’ use of it. Some women claimed they were silent for decades, while others claimed that the rule of silence was more relaxed in their household. The severity of the silencing of the young bride and the extent to which she used this sign language (if she used it) varied amongst families and depended on the gender dynamics of particular households. However, the women who did recall uses of the sign language often demonstrated similar gestures. These included gestures for “father-in-law”, “mother-in-law”, “husband”, “hungry”, “bread”, and “water” among a couple of others. Thus, it can be assumed at this point, that some uniformity did exist among the gestures used by different women.

Moreover, it is very likely that the use of Harsneren was widespread in different regions of Armenia since the circumstances that generated it extended across historical Armenian spaces. Such circumstances included a rule of silence imposed on married women, women’s responsibility to yield their speech as a form of respect for men and affinal relatives, and the socially accepted means and moments of communication for women at the time.

While much is still unknown about Harsneren, the preliminary findings gathered through my recent fieldwork in Armenia allowed for uses of the nearly forgotten sign language to be observed, documented, and analyzed. Conversations with various regional women (regardless of whether or not they spoke Harsneren themselves), also allowed for further examination of social norms and family and gender systems in Armenian culture at the time. Additionally, these findings enabled a deeper understanding of customs of betrothal and marriage and perceptions regarding the role and responsibility of Armenian women in society at that time, as well as today. 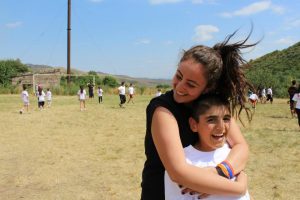 Carla Kekejian in the middle of a soccer game between local children in the village of Baghanis in Armenia during her first trip to the area in 2014. At the time, Carla had gone as a volunteer summer camp counselor; little did she know that the village would become one of her primary research sites years later and that she would return there consistently as an undergraduate and graduate student researcher.

This ongoing study on Harsneren untangles and unravels the sign language and the social circumstances that led to its rise and fall. Beyond patriarchy and gender norms as explanations for the development and continuous use of Harsneren for generations, it is important to look at this process of communication from a wider context that explains where gender-specific and patriarchal norms come from and perpetuate such practices. In addition to an examination of Harsneren specifically and the broader framework for which it falls within, I also seek to explore and understand gender-specific languages and forms of communication among other cultures, as well. Finally, this coming summer, I expect to conduct further documentation of Harsneren and its use across various regions of Armenia.

I would like to conclude by thanking UCLA’s Center for the Study of Women for their recent support of my work, as well as the National Association for Armenian Studies and Research (NAASR) for the research grant they provided me with as an undergraduate student which allowed my research to take off.

Carla Kekejian is a Master’s student in Human Development and Psychology at the UCLA Graduate School of Education and Information Sciences. She was awarded a CSW travel grant in Fall, 2016.