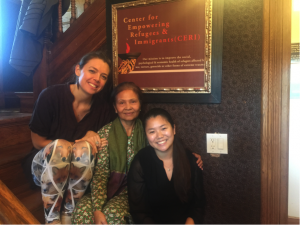 Emily Chen Taing with interviewees Katrin Welch and Elizabeth Chan. Katrin is a Clinical Therapist at Center for Empowering Refugees and Immigrants and Elizabeth is an adult client and regular volunteer.

My name is Emily Taing and I am a fourth year majoring in Asian American Studies and International Development Studies. For my senior honor thesis, I am exploring the concepts of refugee experiences, post-Khmer Rouge trauma, and community resilience among first, 1.5 and second generation Cambodian women. I will argue that the trauma experienced and encountered by refugees who immigrated to the United States in the late 1970’s and early 1980’s have continued to impact the social and economic development of both Cambodian women refugees and younger generations of Cambodian American women. The goal of this research project is to develop further understanding of the Cambodian community in the context of critical refugee studies. As statistics indicate, the Asian Pacific Islander (API) community in the United States has, as a whole, grown tremendously in the past decade. By analyzing the social and economical development of those exposed to trauma amongst this diasporic community, we can better understand how to sustain the mental, social and economic health of the Cambodian community, and furthermore to strengthen the intergenerational relationship amongst Cambodian women. This research is based on an interdisciplinary anthropological approach drawing from ethnographies, oral histories, case studies and empirical evidence of primary and secondary documentary sources.

While Cambodian Americans face many social disadvantages as a marginalized group in the United States, there are a limited amount of scholarly works focused on the social and cultural development of contemporary Cambodian Americans and Cambodian immigrants. The potential in academia by this community has been hindered by the traumatic historical experience of the Khmer Rouge, where generations of scholars went into hiding and discarded their academic work or scholars were exterminated by the Khmer Rouge leaders because intellectuals were viewed as a threat to the dictatorship. Three decades later, the limited scholarship published is majority produced by non-Cambodians studying the country and an offshore population. I believe it is critical to research Cambodian Americans because there is a wealth of knowledge amongst the community elders and it is important to preserve the experiences of this diasporic community so that future generations can understand the struggles and adversity their elders faced. In addition, by researching the social and economic issues Cambodian refugees and their families faced and continue to face today, we can begin to understand the trends of other more contemporary refugee communities. I am sincerely grateful for the Center for the Study of Women for awarding me the 2016 Fall Travel Grant. As an undergraduate student, I appreciate the support towards my senior thesis research and hope to continue to contribute to the academic community.