Recent black feminist criticism…argues persuasively that to tell meaningful stories of black womanhood—and particularly black women’s sexuality—traditional scholarship, and especially academic work that relies on the archive, can never suffice. While archives may be a point of departure, they posit, scholars must turn to creative methodologies to intuit and imagine narratives of black women’s freedom: a freedom that has remained an impossibility in official discourses but that must be invented even where it did not exist in the past, in order that it might exist in the future.” (Allen and Tinsley, GLQ, 251) 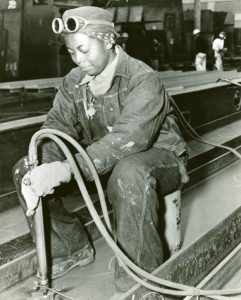 Anna Bland, a burner, is shown at work on the SS George Washington Carver as it was being rushed to completion in the spring of 1943. Tinsleyy’s “Water, Shoulders, Into the Black Pacific” draws on the stories of women like Bland. Photograph by E. F. Joseph for the Office of War Information.

In her recent creative work, “Water, Shoulders, Into the Black Pacific” UT Austin Associate Professor of African and African Diaspora Studies Omise’eke Natasha Tinsley dives into what happens when we envision non-normative and racialized people at the center of the shipbuilding industry in Richmond, California during World War II. By imagining blackness, queerness and femininity in the “belly of imperial power” Tinsley re-imagines imperial power itself along with its normative histories, hegemonic conceits and projections of itself onto the future. She destabilizes all of that by spinning possibility out of the real stories of women who worked in Richmond’s shipyards. Through her work it is obvious that Tinsley is committed to this amalgam of history and creativity as part of a Black feminist praxis that weaponizes history against itself, not by disavowing history, but by going deeper into research.

Tinsley’s decision to write fiction follows from her investigations into the queer Caribbean through literature and historical source materials. Her 2010 book Thiefing Sugar: Eroticism Between Women in the Caribbean is a foundational study of “twentieth-century Caribbean and diasporic women’s literary conceptualizations of living and loving in the Caribbean.” Responding to Jamaican-American author Michelle Cliff’s question, “What would it mean for a woman to love another woman in the Caribbean,” Tinsley puts West Indian poets and novelists into conversation with one another in ways that illuminate not only the literature of the region, but which give new clarity, poetic and historical depth to the Caribbean as nature, as entwined cultures and to the topographies of the region’s islands. Tinsley’s scholarly and creative process turns the Caribbean inside-out, further historicizing neglected stories and tying the region to current academic debates. Her decolonial and feminist writing challenges Caribbean and queer studies scholars to rethink assumptions that are often premised on notions of agency and humanity drawn from what she terms the “Global North.” Drawing from close readings of historical sources and of the literary work of women in the Caribbean Diaspora, Tinsley imagines a same-sex loving Caribbean in order to craft new histories that can create the foundations for the possibility of freedom in the future. 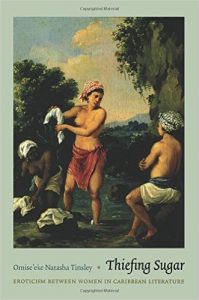 her “constant interrogation of how we (public intellectuals) constitute and communicate knowledge,” in addition to her beautiful scholarship, inspired the theme of Thinking Gender, Imagining Reparations to a large degree. Without praxis such as Tinsley’s, what is the use of writing history? Without a stake in imagining an equitable future that can both understand, explore and rewrite “earlier, painful histories,” what is the role of the scholar? The voices of women-loving women complicate the stories we tell and receive of the colonial and postcolonial Caribbean, but both her work and her process demand real investment in imagining freedom in the past so “that it might exist in the future.”