by Jana Gowan, Graduate Student Researcher, Center for the Study of Women 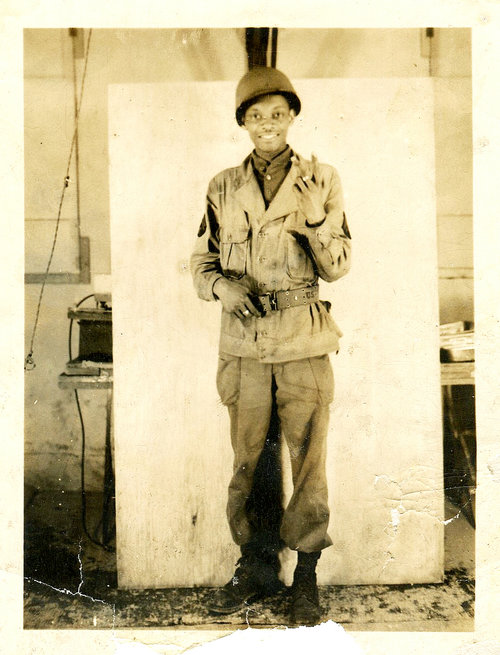 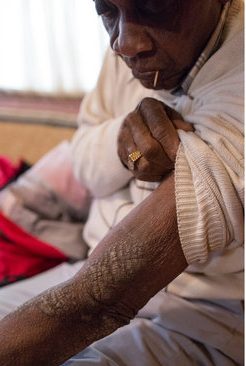 Environmental justice and health movements raise awareness of the insidious nature of everyday chemical exposures and their alarming consequences for the health of our bodies and natural environments. These daily exposures are entangled with the history of militarization and war, from the invention and preliminary use of mustard gas in World War I through Gulf War Syndrome at the end of the 20th century. This is the second in a series of five posts that examine the origin story of chemical warfare, veterans’ experiences of chemical exposure, and the gendered dynamics of the increased presence of chemicals in the civilian world. Read Part 1, “Chemical Warriors: An Origin Story” and Part 3, “Over the Rainbow.”

The man in these photos is Rollins Edwards, first as a young U.S. soldier in 1945 [1]  and then as an aging veteran still struggling with the injuries received from the U.S. government in World War II experiments [2]. Edwards still suffers from rashes on his arms and legs where he was burned by mustard gas during these experiments. 70 years later, he still experiences periodic outbreaks, during which his scars itch and flake, and his skin literally falls off in pieces. Edwards, along with approximately 60,000 peers, volunteered to serve as a test subject in a series of experiments designed to explore chemical warfare injury and the safety of protective equipment.

Veterans speak of being coerced to volunteer, misinformed or not informed at all about the nature of the experiments until they were locked inside a gas chamber without appropriate protection and exposed to mustard gas [3]. Immediate results of exposure were erythema (burning of the skin), conjunctivitis and laryngitis. Although there has not been a significant amount of research into the long-term impacts of mustard gas, there have been causal relationships established between exposures and skin cancers, long-term eye injury and adverse psychological impacts such as Post Traumatic Stress Disorder (mostly related to conditions of exposure in the gas chamber and field tests) [4].

The United States was not the only Allied Power performing these experiments on its own soldiers. In fact, although we were involved in other countries’ research, experiments on U.S. soil were conducted years after the British Empire initiated theirs in Australia, England, Canada and India. Bridget Goodwin researched and directed the film, Keen as Mustard, in 1989 which tells of the Australian experiments. In 1998, she published a book which provides even more details and historical evidence.

Goodwin’s material helps us comprehend how the Allied Powers could even consider using gas warfare on their own soldiers when they never used it on the enemy. She asserts that there are three contemporary realities, which led to the implementation of these experiments:

What exactly did the experiments entail? Soldiers were exposed to mustard agents while in a gas chamber wearing varying levels of protective gear; soldiers were subjected to skin tests in which the chemical would be dropped directly onto the skin; soldiers were also exposed in battlefield scenarios in tropical locations to test the persistence of toxicity.

An insidious element of these experiments that is rarely discussed is the selection of subjects based on race. A segment of the project aimed to discover whether chemical weapons had different effects on non-whites and whites. Japanese American, African American and Puerto Rican soldiers were put into test groups, while European American soldiers were the control group. Susan L. Smith stresses the importance of discussing this aspect of the history. “Despite all we now know about the mustard gas experiments,” she writes, “the racialized nature of some of the mustard gas tests has escaped scrutiny. Recent popular accounts of the experiments provided by journalists, scientists, politicians, and ﬁlmmakers have dramatized aspects of the story and brought it to the attention of the public. However, they have paid almost no attention to the ways in which ‘race’ emerged as an aspect of the research program. Racial concerns, generated in part by a war against Japan and its ‘non-white’ soldiers, shaped the development of these experiments” [6].  This use of ‘race’ as a scientific construct plays a significant role in the history of these experiments as it adds another layer of injustice to these procedures.

Since the 1970s, when the National Commission for the Protection of Human Subjects of Biomedical and Behavioral Research published The Belmont Report, which provided new guidelines on scientific tests involving human subjects, performing research on human subjects without obtaining their informed consent has been forbidden in the United States [7]. It is hard for people today to imagine how and why these experiments were conducted in the first place. It is heartbreaking to listen to stories of veterans like Rollins Edwards tell of their struggles to find physicians who would believe them, medical care that would cure their experiment-related ailments and health care coverage from the U.S. Department of Veterans Affairs. Rather than learning the lessons from the World War I generation haunted by mustard gas, the military created a second generation of World War veterans who would suffer because of chemical warfare.

1. Photo source: http://www.npr.org/2015/06/22/415194765/u-s-troops-tested-by-race-in-secret-world-war-ii-chemical-experiments. NPR’s caption reads: “Rollins Edwards as a young soldier in 1945 at Clark Air Base in the Philippines. Courtesy of Rollins Edwards.”

2. Photo source: http://www.npr.org/2015/06/22/415194765/u-s-troops-tested-by-race-in-secret-world-war-ii-chemical-experiments. NPR’s caption reads: “Rollins Edwards, who lives in Summerville, S.C., shows one of his many scars from exposure to mustard gas in World War II military experiments. More than 70 years after the exposure, his skin still falls off in flakes. For years, he carried around a jar full of the flakes to try to convince people of what happened to him. Amelia Phillips Hale for NPR.”