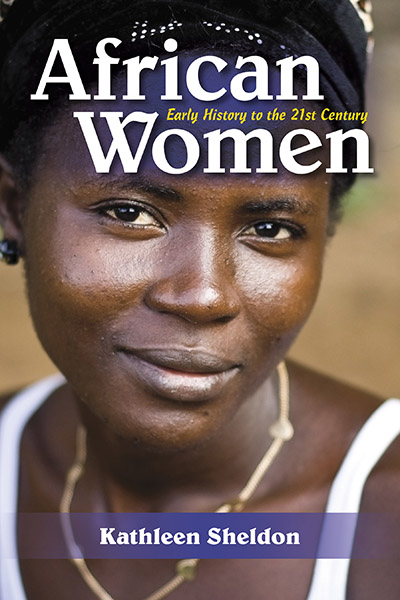 The history of African women is a vital and successful field of study, growing from a small number of books and articles in the 1960s and 1970s to the thriving set of research covering a huge range of place, time, and topic that has been achieved in the twenty-first century. It may come as a surprise, then, to learn that a textbook on African women’s history does not currently exist, and that general African history texts still do not include sufficient material on women. For the past ten years or so I have been writing and revising a book for classroom use that will rectify this omission. This book, African Women: Early History to the 21st Century, is scheduled for publication by Indiana University Press in May 2017. I was very grateful to the Center for the Study of Women for awarding me the Tillie Olsen award this year, which has covered some of the expenses associated with such a broad endeavor.

A problem in the existing literature is the lack of an up-to-date, comprehensive, and reliable publication on African women’s history. The books that have treated the history of women on the entire continent have often been edited collections, and while some of those have been excellent, they have had a somewhat limited focus on colonialism or slavery, and they have suffered from the inevitable disjointed nature of a range of approaches from the contributors. The few books that have attempted a wider view have not always met the need for a single text. Iris Berger and Frances White’s Women in Sub-Saharan Africa was originally written as a sourcebook for teachers, to help them incorporate information on women into their classroom teaching. Nonetheless, with little alternative, it has been used as a textbook, though it is now nearly twenty years old, and has been overtaken by recent scholarship.[i] One of the only books explicitly written as a textbook, Catherine Coquery-Vidrovitch’s African Women: A Modern History, is also now over twenty years old, and as her approach was not clearly chronological, it was not always easy to use with history students.[ii] Iris Berger’s new book, Women in Twentieth-Century Africa, is an excellent source, though it is restricted to recent history.[iii]

Not only were there no current reliable textbooks specifically on African women’s history, existing textbooks on Africa usually included very little about women, and the material that was included was extremely limited. As shown in Paul Zeleza’s 1997 analysis of women’s presence in such texts, there was both an insufficient quantity of information, and the sections that referred to women often relegated them to the margins of the story.[iv] Women were frequently mentioned only in passing as one of several oppressed groups, such as “women and children” or “women and slaves,” with little or no elaboration on their activities. Women were also often presented as passive participants, described as accomplices to men, as victims of male actions, or as observers of male activity.

Even in the past decade or so, women’s history has been omitted or trivialized in African history textbooks. I have surveyed a number of such texts, checking indexes and the text itself. Some textbooks stand out for their better inclusion of women, such as Africa, an edited collection (4th edition, 2014), that incorporated women into several chapters, especially notable in those written by female scholars who have themselves pioneered much of the new scholarship on African women. The new edition, however, has a contemporary focus, while earlier editions were more historical but included less on women.[v]

But others have remained disappointing, including John Iliffe’s Africans: The History of a Continent, which was published in 2007.[vi] When a reader checks the index for “women,” they are told to “see family structure.” Even yams, with four references, have more index entries than women. Though the index listing for family structure includes a wider range of subtopics, including feminism, labor migration, and Islam, perusing one sample from the text itself is discouraging. The section on “The Family” in the chapter on colonization in West Africa is almost entirely about male competition for wives in societies with polygynous family structures.

In a concession to the importance of women, there are some books that leave women out, but acknowledge the omission and even apologize for it. Though these two examples are not the only books that treat women in this regard, they illustrate the continuing problem. Paul Nugent’s Africa since Independence does not have a direct index entry for women, though they do appear under individual country entries.[vii] Yet those references remain limited as well; for example, an entry for “Kenya: women,” takes the reader to page 363, where there is a discussion of Wangari Maathai and the Green Belt Movement. Maathai merits her own index entry as well, though her name is misspelled. Liberia does not have women as a sub-topic in the index, though Ellen Johnson-Sirleaf is in the index and earns a brief mention in the text, recognizing her historic role as the first woman to be elected president of an African nation. Nugent is aware of this gap, explaining that he made a decision to focus on politics rather than social history. On page one in his introduction he acknowledges that “many readers may feel that an explicit gender dimension is lacking.” He goes on to comment that “In mitigation, however, I do highlight the role of rapid urbanisation in fostering a highly assertive youth culture.” While discussing “politics” should certainly include gender and women, he adds to the dismissal of political women by conflating women and youth, and suggesting that talking about one makes it okay to ignore the other.

A similar omission and narrow view is found in a collection of essays on Teaching Africa: A Guide for the 21st-Century Classroom (2013). In 22 chapters on a range of topics related to teaching students in the U.S. about Africa, there is not a single chapter on women. Since the book was based on a course that the editors had been teaching, and they had not been including women or gender, that aspect was left out of their book. As explained in one of the early chapters, they hope to add a gender aspect to future versions of the course – “Going forward…the course will be revised to add a unit that explicitly addresses gender (with a focus on women) and development.”[viii] Even in their pledge to do better in the future, they introduce a very limited view of how to write about African women, as their focus on issues of women (or gender) and development ignores substantial areas of African women’s experience.

Given the issues and limitations in African history texts, when even some historians of Africa seem unaware of current research on women’s history, African Women is designed to accomplish two goals.

My first goal was to write a comprehensive narrative of African women’s history by bringing together information that is usually scattered and narrowly focused. Naturally it is not possible to be completely inclusive, as there is now far too much research and information to easily compress into one book. African women’s history is a vast topic that embraces a wide variety of societies in over fifty countries with different geographies, social customs, religions, and historical situations. Women themselves enter the story with differences in their age, marital status, education, work experience, and rural or urban background. I have sought to include stories and histories that address the range of women’s experiences, with sections on all regions of the continent and representing the variety of women. I also approached the material as a historian, and therefore, as much as possible, followed a chronological format while demonstrating how social change progressed over the centuries.

My second goal was to show that fully understanding the history of the continent requires knowledge of women’s achievements in their families and their contributions to their communities. As scholars of women’s history have argued for other world areas, it is not enough to prove that women were present and were agents in their own lives. Women’s presence and agency has profound implications for the ways in which history is interpreted and understood. Historical experience is not only found with political rulers and conflict, but includes families, household work, and women’s involvement in their societies. Women were, of course, engaged in politics and conflict, and knowing about their participation in those areas alters how those topics are understood. The historical narrative is completely changed when women’s religious roles, labor, options for marriage and childbearing, and access to political authority are the beginning point. My book tells the story of women and advances African history more broadly by demonstrating the central place women have occupied in making that history.

Knowing women’s history will make it possible to better understand where African women stand today. Women once had greater power in many African societies where they were able to wield both individual and collective authority, sometimes with greater success than others. As this book shows, women still draw on older forms of exercising female collective power, often developing innovative approaches out of their historical experiences in order to deal with new situations. Some patterns in the division of labor, marital options, and other gendered relations were more fluid in the past, and may still be more fluid than is usually recognized. While those social structures have changed, some aspects have also persisted, such as women’s focus on farming as the basis of their economic contributions, and their expectation that motherhood is a source of power.

Women flourished and were able to become accomplished leaders and wealthy businesswomen, while at the same time others suffered and lived in poverty. Issues that caused rifts in society, such as class differences, religious affiliation, language and ethnic variations, and more, also applied to women. Women were slaves and slave owners; they actively participated in marriage negotiations and they were forced into arranged marriages while still girls; they scraped by selling peanuts along the roadside and they managed international trading networks; they cultivated food in small rural garden plots and they sold imported cloth in urban markets; they were required to serve at religious shrines and they founded influential independent churches; they were kept out of formal schooling and they earned doctorates.

While women as a group were oppressed by patriarchal traditions and structures, many individuals were able to find the space to develop their own interests. In various African communities women’s and men’s roles were recognized as complementary. The gender division of labor might assign different tasks to men and to women, but both women and men were viewed as essential to the completion of those tasks and their cooperation was required in order to support family and community well-being. Those factors were present in African women’s history, and have continued to inform their presence in the modern world.

While many western readers may hold limited images of African women as oppressed and immobilized by poverty, this book seeks to uproot such views. Readers will find stories about historic and modern women and their contributions, evidence for the central role women played in African history, and a greater understanding of the course of African history across the continent and across centuries.

Kathleen Sheldon is a historian who has primarily written about African women and Mozambique. She holds a PhD in History from UCLA. She was the recipient of a 2016 Tillie Olsen Research Affiliate Grant from the Center for the Study of Women.