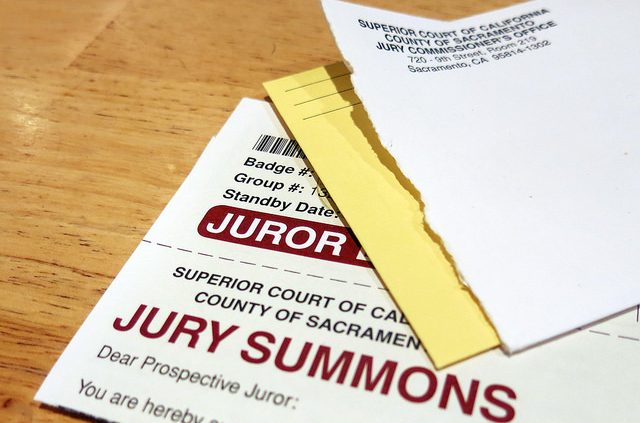 The Paradox of Integration: How Excluding Formerly Incarcerated People from Jury Duty Hurts Us All

U.S. history is filled with bloody battles of citizens fighting for the right to vote. So much so that universal suffrage among citizens has become a hallmark of American democracy, along with the right to be judged by a jury of our peers. Yet, most citizens dread their inevitable jury duty summons (evidenced by countless guides online about how to avoid jury duty service). But for millions of U.S. citizens, serving on a jury isn’t something that they take for granted or seek to escape.

Even though laws vary from state to state, people convicted of felonies are subject to the removal of their civil rights, including removal of voting rights and jury duty service (a.k.a. felony disenfranchisement). In 2014, these laws were leveraged against the estimated 4,708,100 people on parole or probation in the United States. Scholars and activists argue that these consequences represent sentencing formerly incarcerated citizens to civil death. In short, the term “civil death” highlights the way criminality produces the death of someone’s citizenship and its associated rights. By this logic, the disproportionate incarceration of Black Americans, especially following The War on Drugs, also produced the disproportionate civil death of African American citizens. Holly[1], a 49-year-old formerly incarcerated African American woman living in Los Angeles, reflected on this bind, saying, “Oh I would love to vote…But I can’t because of my felony…We did our time, and we keep getting punished for it.”

In California, activists are fighting against the civil disenfranchisement of formerly incarcerated people. A New Way of Life Reentry Project (ANWOL), Assemblymember Reginald Jones-Sawyer, and a host of other community organizations recently co-sponsored Assembly Bill 324 (AB 324) in order to allow people with felonies to serve on juries after completing their parole or probation terms. California has moved towards re-enfranchising formerly incarcerated people by enacting legislation that allows people with felonies to vote after they have completed their parole terms. Why would we treat jury duty service any differently?

The restoration of civil rights is important for formerly incarcerated people’s political and social integration into American democracy. The ACLU’s Voting Rights Project Director, Lori Shellenberger, captured the paradox of civil death for formerly incarcerated people, saying, “If you’re living and working in your community, and you’re paying taxes, but you’re not given a political voice, it undermines the purpose of […] sentencing.” The Sentencing Project estimates that 5.8 million American citizens experience felony disenfranchisement; this represents 1 in every 13 African American citizens and only 1 in every 56 non-Black citizens. This means that the voices of Black citizens are disproportionately erased from the political process that decides our laws, the politicians who represent us at the local, state, and federal levels, and the procedures that determine who gets locked into our carceral system. Speaking to the latter, we know that the lack of Black jurors disproportionately leads to the conviction of Black defendants.

Tiffany Johnson, Associate Director of ANWOL and a formerly incarcerated African American woman who spent more than a decade behind bars, revealed how women of color like her are further disenfranchised by a jury selection process that excludes people with felony histories: “A lot of people are not even taking the opportunity to even go to trial from our communities because they know they will not have a fair opportunity from the jury. That they are not going to be sitting in front of their peers. So they are more quick to take a plea bargain, not even realizing that they are about to sign their life away… That’s what I did. I could have gotten a lesser sentence due to what led up to me committing this crime. Instead, I got tricked into taking a plea bargain and signed my life away for fifteen-to life, when someone of another nationality who did almost the same thing and went in front a jury of their peers and got acquitted or a lesser sentence.” Ms. Johnson’s experience highlights a failure not only of our justice system, but of the American practice of democracy.

Despite their efforts, amendments to AB 324 have stalled, and we need your help to push this amendment forward. Contact ANWOL’s Public Policy Director, Larry Foy at lfoy@anewwayoflife.org or (323) 563-3575 to get involved. We should recognize how dehumanizing it is to assume that formerly incarcerated people are only ones among us who are “deviant” or needy and that they have nothing to offer society. I believe we all stand to benefit from throwing more people into the jury pool, and I hope you will join the advocates of AB 324 as they try to shape our judicial system into one that is truly for and by the people.

Susila Gurusami is the recipient of CSW’s 2016 Paula Stone Legal Research Felowship. She is a doctoral candidate in the Department of Sociology. Her dissertation project, “Deprivation and Depravation: Moral Policing of Formerly Incarcerated Black Women,” uses 18 months of ethnographic observations and participatory-action data to investigate how Black women in Los Angeles navigate the day-to-day challenges of life after prison or jail. She also received the CSW Constance Coiner Graduate Fellowship in 2013.