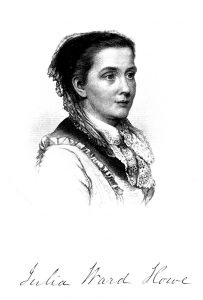 On July 15, 2016, a session was held at the Summer Institute in American Philosophy called “Feminisms Past and Present.” The chair was Professor Marilyn Fischer of the University of Dayton, author of Jane Addams and the Practice of Democracy and other works on Addams. The panelists were Denise Meda of Mount St. Mary University, Joseph Urbas, of Montaigne University of Bordeaux, and myself, representing the UCLA Center for the Study of Women.

The first paper was by Dr. Meda. Dr. Meda’s paper was about Cortez’s translator to the Aztecs, a woman by the indigenous name of Malintzin, traditionally known as La Malinche. Specifically, Meda traced the different treatments of La Malinche from Octavio Paz, representing the traditional view of her as a traitor to her people, to Grace Anzaldua, pointing out that as a slave, she would scarcely have had the option of refusing to aid the Spanish. Meda shared how when she was growing up when Paz’s view of Malintzin as traitor was universal, her own mother had dared to question it; she credited her mother with setting her on the track of researching the historical woman who became the despised myth. The paper was clear and informative and the audience was clearly interested in learning more about both the subject and the scholars.

My paper, called “From Private Student to Public Philosopher: The Later Career of Julia Ward Howe” followed. In the course of arguing that, in her time, Julia Ward Howe anticipated the present-day American Philosophical Association in undertaking to cultivate an American Public Philosophy outside the academy, I informed the audience that Howe, author of the “Battle Hymn of the Republic,” who lived from 1819 to 1910, spent most of her life after the age of 45 trying to share and spread her knowledge of philosophy. Her work included publications in which she sought to convince the public of “the practical uses of philosophy” and to take up “the study of philosophy,” that “the Kantian philosophy” had a cultural “result,” about the differences between philosophy in Europe and America, that there were distinctions between philosophy and religion, and that women had “a position” in Plato’s Republic.

After an aborted beginning spurred by an appreciative encounter with Comte’s Philosophie positive in the early 1850s, her campaign to promote and publicize philosophy began in earnest with a ecstatic reaction to Spinoza’s Ethics. This experience led to the writing and drawing-room delivery in Boston, Washington, and the Philadelphia area of some or all of a series of six lectures under the unspoken name of “Practical Ethics” and intended for publication under the tentative title, “Ethics and Dynamics.”   This activity led to an invitation to contribute three papers to a prominent Boston learned journal, including “The Ideal State,” an original review of ideal polities from Plato on. A conversation with a historian neighbor convinced Howe to tackle reading Immanuel Kant’s famous Critique of Pure Reason, in German. This inspired the writing of a new group of lectures in metaphysics, three of which she was invited to read to the Boston Radical Club, a group mostly of younger Unitarian ministers and Harvard professors. The formation of a new, even more radical group—the Free Religious Association—led to the founding of a public lecture series in Boston, to which Howe contributed three, including one called “The Ethics of Culture.” This period coincided with the formation of the New England Women’s Club, to which she would give a paper on “The Study of Philosophy” and to which, as President, she invited famous local philosophers such as Emerson to lecture. Howe gave a paper at a special meeting of the famous “Hegelian” Philosophical Society in Saint Louis in 1870.   In 1874 she was asked to speak to the Chicago Philosophical Society, and her talk was covered by all three Chicago newspapers. Howe became a regular lecturer through the 1880s at the Concord, MA Summer School of Philosophy and Literature, where Emerson and William James also spoke. At the end of the decade she gave a paper on “The Practical Uses of Philosophy” at the annual meeting of the Association for the Advancement of Women in Toronto.

Thereafter, in the last two decades of her life, Howe’s philosophical contributions were more personal, consisting largely of invited journal and magazine articles with titles like “Life–What it Means to Me,” and an unpublished poem entitled “To Philosophy.” I concluded that Howe differed from contemporaries in seeking persistently to bring serious philosophy—even Kant—to the public. One question I was asked was if Howe was involved with the Western Philosophical Association, founded in 1900 (she was not); and if she were influenced by Emerson’s “Self-Reliance,” to which I responded that she was influenced by Emerson in general. Much more could be said on the latter subject.

Continuing the Emersonian theme, the final paper, by Joseph Urbas, author of “‘Being Is The Great Explainer,’ in Thoreauvian Modernities (2013), ed. Francois Specq et al, was “Women and Metaphysics in the Transcendentalist Circle: Fuller, Peabody, Emerson.” Professor Urbas shared a packet of quotations from Mary Moody Emerson (Emerson’s aunt), Margaret Fuller, and Elizabeth Peabody, seeking to rebut the 1978 claim by philosopher Stanley Cavell that Emerson was devoid of interest in metaphysics by showing that Mary Emerson, Fuller, and Peabody, who all exerted influence on as well as received influence from Emerson, were profound readers and discussants of metaphysics, particularly causationism. Afterwards it was observed that the papers, which were put together by Institute Director Professor Colin Koopman, of the host University of Oregon, had dovetailed remarkably well and the panelists were encouraged to publish their research.

Carol Bensick is currently working on a project called “The Submerged Philosophical Career of Julia Ward Howe.” She received her B. A. from Wellesley College in 1977, double-majoring in European History and English, and her Ph.D. from Cornell University in 1982 in English, specializing in canonical American Literary and Intellectual History and the European Novel to 1914. From 1982 to 1998, she was an Assistant Professor successively at the University of Denver, the University of Oregon, and the University of California, Riverside, as well as a Visiting Assistant Professor in several Summer Sessions at Cornell and UCLA.