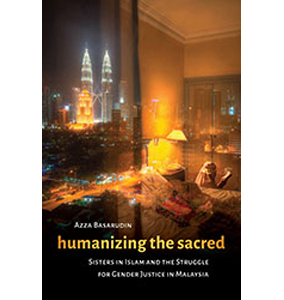 In Humanizing the Sacred: Sisters in Islam and the Struggle for Gender Justice in Malaysia (2016, University of Washington Press) Azza Basarudin explores the intersection of Islam, feminist activism, and the state in Malaysia. She details how activists from a local women’s organization are drawing on Islam as a frame of reference to produce feminist knowledge and mobilize their strategy for claiming rights. In doing so, Basarudin illuminate Muslim women activists as agents of contemporary Islamic reform concerned with legal subjectivity, religious leadership, and social justice.

Basarudin’s research is based on a feminist ethnography of a group of professional women who are members of Sisters in Islam (SIS), an internationally renowned Malaysian organization committed to protecting the rights of Muslim women and promoting an Islam based on conceptions of equality and justice. SIS draws on feminist interpretations of primary sources of Islam—the Qur’an and Sunna (the practices of the Prophet that include hadith, traditions/narrations)—alongside constitutional law and human rights principles as a strategy to advocate for equality and justice. SIS formulates campaigns, study sessions, workshops, public lectures, and media advocacy and works strategically with its regional and international alliances to lobby the state for shari’a reform and to educate the public on women’s rights in Islam.

Basarudin demonstrates the possibilities and challenges of translating feminist interpretations of Islam into grounded activism to effect change in social mores and legal codes, and to illuminate how women’s activism within Islam is a space of dissent and of remaking “Muslim” self and identity. She argues that the shift from patriarchal to feminist interpretations of Islamic sources humanizes elements in the formulation of legal codes, generates new meanings of women’s rights, asserts a sharp challenge to institutionalized religious authority, and reinvigorates faith and piety. She views this shift as “fracturing” the historical monopoly of textual interpretation in Malaysia and, consequently, the state’s authority to define and legislate Islam.

At the heart of this book are women activists’ refusal to concede Islam to patriarchal interpretations and their insistence that the formulation of laws and policies account for women’s (and men’s) lives and experiences, as well as the contemporary realities of communities of Muslims. Humanizing the Sacred makes visible women’s everyday practices of living and negotiating Islam and emphasizes the inseparability of religion, law, and politics in an era of globalization.

Azza Basarudin received her PhD in Women’s Studies in 2009 from UCLA and an M.A. from Roosevelt University in Women’s and Gender Studies. Her primary areas of specialization are feminist studies in Islam, transnational and postcolonial feminist theories, feminist ethnography, and social justice and human rights with geographical focus on Southeast Asia and the Middle East and North Africa. Basarudin’s most recent appointments were as a Research Associate and Visiting Lecturer at Harvard University and a Future of Minority Studies Mentoring Fellowship at Syracuse University. She has served as a Research Fellow and Visiting Scholar at the Institute of Malaysian and International Studies and as a Research Fellow at the American University of Cairo. She is also a recipient of awards from the Wenner-Gren Foundation for Anthropological Research, Andrew W. Mellon Foundation, the Social Science Research Council (SSRC), and the National Science Foundation (NSF), among others. Her writings have appeared in A Jihad for Justice: Honoring the Work and Life of Amina Wadud, Women and Islam, Al-Raida: Journal of the Institute of Women’s Studies in the Arab World, Twentieth-Century Arab Writers, and Voices of Resistance: Muslim Women on War, Faith and Sexuality.

Humanizing the Sacred: Sisters in Islam and the Struggle for Gender Justice in Malaysia: https://www.washington.edu/uwpress/search/books/BASHUM.html