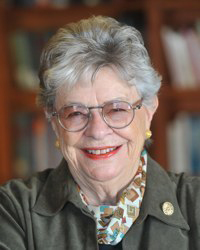 We are sad to report that Helen (Lena) S. Astin, cofounder of CSW and influential feminist scholar, passed away on October 27. She was a Distinguished Professor Emerita of Higher Education at UCLA and  widely known for her scholarly activism and research concerning education and career development of women, leadership, and spirituality.

Born in Serres, Greece, in 1932, her early interest in science and math was discouraged because of their association with male careers. The alternative, teacher’s college, however, proved transformative for her and her professional trajectory. Upon graduation, she moved to the United States in 1951 to pursue her newly developed interest in psychology—which eventually brought her to Ohio University in Athens, OH, where she earned a Master’s in Psychology, and then to University of Maryland when she earned a PhD. She was the second woman to earn a PhD in psychology at the school and being such a rarity within her graduate program heightened her awareness of educational sexism and inspired her professional interest in studying women in higher education: “…that’s when I saw sexism really,” she recalled later. “the first time I encountered it. And I didn’t understand it…So you can see that in those days, there were not many women, which prompted me later on to study women with doctorates” (UCLA Oral History Program).

After marrying fellow graduate student, Alexander Astin, Lena worked with the Commission on Human Resources and Higher Education as part of the National Academy of Science starting in the 1960s. There, she investigated talent development and the utilization of women in the workforce and gained much recognition in conjunction with the women’s sociopolitical movement in the United States.

Driven in part by her personal experience trying to make a career in a field dominated by men, her early scholarly work focused on equity for women. Her book, The Woman Doctorate in America (Russell Sage Foundation, 1969), was published just as second-wave feminism was burgeoning. Deflating some myths about highly educated women, it also documented widespread sex discrimination in higher education. In 1970, she was asked to chair the American Psychological Association’s (APA) Task Force on the Status of Women in Psychology. Her work helped to pinpoint the deficiencies in psychological research with regard to women. The Task Force recommended that APA create a division that would be devoted to researching and promoting the psychology of women. In 1973 Division 35 was created.

In 1973 Alexander and Helen were both offered professorships at UCLA. During her 29-year affiliation with UCLA, she served as the Associate Provost of the College of Letters and Science at UCLA from 1983 to 1987 and served as the founding director for the Higher Education Research Institute at UCLA.

Her books have made a lasting contribution to scholarship on women, education, and equity: They include ‪Some Action of Her Own: The Adult Woman and Higher Education (Lexington, 1976) and Sex Discrimination in Career Counseling and Education (Praeger, 1977). Astin’s 1991 book, Women of Influence, Women of Vision (co-authored with Carole Leland; ‪Jossey-Bass, 1991), was an in-depth study of 77 prominent women leaders who had helped to bring about societal change on behalf of women. “A book for students, for teachers, for scholars,” noted Ann W. Richards, former governor of Texas, “and for any woman who wants to know how the struggles of individual women came to create what is collectively known in this country as the women’s movement.”

In the mid-1980s, she worked with Nancy Henley, Anne Peplau, Kathryn Sklar, and Karen Rowe, on a proposal that led to creation of the UCLA Center for the Study of Women in 1984. She served on the Advisory Committee and when Karen Rowe stepped down as Director, Lena stepped up and served as Acting Co-Director with Julia Wrigley in 1990-91 and then as Acting Director until Kate Norberg was appointed in 1992. Under her leadership, CSW convened several influential conferences, including the first graduate student research conference (what became Thinking Gender), What Ever Happened to Women’s Liberation: Rethinking the Origins of Contemporary Feminism, Women and Work: Understanding the Gender, and Women, Work and Power in the Middle East.

On the occasion of CSW’s 25th anniversary, Lena extolled its success and its continued value: “CSW has been a ‘gem’ in our midst. Established to support and celebrate the research of academic women and for women, it has played a transformative role for feminist scholarship at UCLA. It has supported and continues to do so many generations of feminist scholars. Particularly heartwarming is that it has been critical to the work of young scholars and graduate students.” We are all grateful for her role in its creation and continued existence at UCLA.

In recent years, Lena had grown more interested in the role of spirituality in improving the lives of college students. The results of a long-term study were published in Cultivating the Spirit: How College Can Enhance Students’ Inner Lives (Jossey-Bass/Wiley, 2010). CSW hosted an event, Students and Spirituality, where Lena shared her research and the book’s recommendations.

In 2012, as part of the oral history component of CSW’s Women’s Social Movement Activities in Los Angeles project, Lena was interviewed by former CSW staffer Kimberlee Granholm. The audio materials and transcripts are available on the UCLA Library’s Oral History website:

As a result of that interview, Lena went on to write an autobiography, titled The Road from Serres: A Feminist Odyssey, which was published by Marcovaldo Productions in 2014.

All who knew her will cherish the memory of Lena’s warmth and kindness. All of us benefit from her unflagging commitment to gaining equity for women.